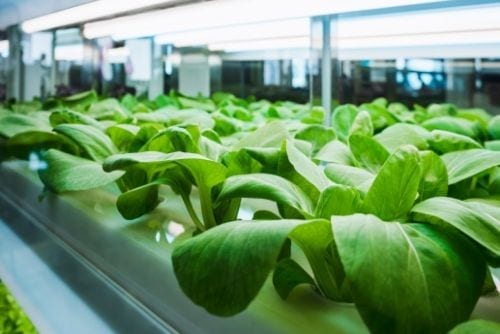 Cannabis cultivation with aeroponics, or farming without soil, has big implications for cannabis and beyond.

Aeroponic growing methods are gaining steam in the agricultural world, and that’s a positive development for more than one industry.

Usable farmland around the world is increasingly being lost as environmental factors render it unusable, or the land is simply used for purposes other than agriculture. At the same time, concerns about water and energy conservation are making it clear that the agriculture sector is in need of innovative solutions to maintain food sustainability. This has fueled the vertical farming revolution.

While it’s not always thought of as such, the burgeoning legal cannabis industry is as much an agricultural industry as agri-food, and so many of these issues are just as relevant in that space. A solution for indoor growing that provides a consistent, high-quality product while saving on space and other resources is every bit the game changer for cannabis growers as it could be for food producers.

Aeroponics is a cutting-edge, highly controlled method of crop cultivation. Basically, it’s a method of growing crops out of the ground with no soil and very little water. The exact design differs from setup to setup, but the common idea is that plants grown in aeroponic systems are suspended vertically by the stem while the dangling roots are regularly sprayed with a nutrient-rich solution in the form of an atomized mist by a system of automatic nozzles. Solution that is not absorbed by the roots is usually collected in a chamber below for reuse. This method allows for plants to be grown in a closed environment and arranged vertically, allowing vertical farms to take up comparatively little space.

The technology has been around in various forms for decades, but as costs and other issues associated with growing food have increased, aeroponics has seen something of a renaissance in recent years, particularly for small-scale operations looking to cut costs.

There are a host of benefits that stem from the aeroponic approach to farming. Aeroponics offers greater efficiency than perhaps any other method available, using 90 percent less water than traditional in-ground farming, or up to 40 percent less water than even the most efficient hydroponics setup. This reduced dependency on water has benefits beyond cost savings. As 70 percent of water use worldwide is for irrigation purposes, large-scale adoption of water-efficient farming techniques like aeroponics could go a long way to protecting one of the planet’s most important and vulnerable resources.

Free from the need to dedicate space to soil, aeroponics setups allow plants to be spaced closer together, which in turn allows growers to grow more plants using less total space. This could be a practical solution in places where agriculture-suited land is expensive or in short supply. The indoor grow space and absence of soil also mean that there’s reduced risk of plant-eating pests.

The benefits extend beyond resource efficiency. There have been several studies conducted over the years that have shown that plants grown aeroponically can exceed their traditionally grown counterparts in quality. This is partly because the roots are uniformly saturated in nutrients rather than having to compete for them in soil. The process also offers growers an unprecedented level of control over the growing process, with growers able to see first hand the health of the roots and adjust nutrient solutions accordingly. For food crops, this means larger, more nutritious and tastier yields. For cannabis, growers are able to produce some of the cleanest and most consistent product available.

We’ve only begun to realize the potential of aeroponic farming, but the technology actually has roots dating back to the early 20th century, when botanists developed a crude form of aeroponics in order to study root structures. In the late 1980s, engineer Richard Stoner invented and patented the one of the first modern forms of aeroponics, developing a prototype for growing herbs in a greenhouse and founding the agri-biotechnology company AgriHouse.

The technology caught the attention of NASA in the 1990s. The space agency saw the technology as a possible solution to many of the inherent problems with growing food in low gravity. Not only were the results of NASA’s orbital aquaponics experiments encouraging, but the experiments gave the technology a huge media exposure boost and a space-age image, paving the way for adoption of aeroponics across the agriculture industry.

It’s not surprising that the cannabis industry has taken notice of aeroponics, as the same factors that make this growing method attractive for food growth apply to cannabis cultivation. One of the largest hurdles for a cannabis producer is acquiring grow space, so the option to forgo soil makes aeroponics a practical solution. The reduced water requirement is beneficial to both growers and the communities that host them. Perhaps most importantly from a business perspective, aeroponics can produce large yields of excellent bud in terms of size, consistency and trichome quality and, of course, potency.

Cannabis-producing company James E. Wagner Cultivation (TSXV:JWCA) has made one of the cannabis industry’s largest bets on aeroponic technology. The company has developed a proprietary aeroponic growing process that it is calling “GrowthStorm.” Based on the design originally developed by Stoner back in the 1980s, the company says that GrowthStorm produces cannabis with 25-percent cannabinoid product, rather than the 20-percent industry standard.

James E. Wagner is currently conducting its aeroponic growing out of a 15,000-square-foot retrofitted facility in Kitchener, Ontario. The company plans to expand its operations with a 345,000-square-foot facility currently under construction. The company also has plans to establish licensing agreements with other licensed producers in the near future, further expanding aeroponic technology’s footprint in the cannabis industry.

Liberty Leaf Holdings (CSE:LIB,OTCQB:LIBFF) completed its Just Kush facility in BC’s Okanagan Valley in 2018. The 13-acre facility incorporates the company’s own proprietary aeroponic grow system. Agri-tech startup GrowX is also developing aeroponics technology, hoping that improving the technology can revolutionize not just the cannabis market but the entire vertical farming space. AeroFarms has spent over US$30 million on developing vertical farming facilities that utilize aeroponics technology. Like other companies in the space, AeroFarms is aware of the potential the technology has to solve global food sustainability issues.

Experts have noted the potential of innovative vertical farming techniques to usher in a “third green revolution,” providing desperately needed means to provide food security worldwide. The cannabis industry is at the forefront of developing this technology with implications that go well beyond cannabis.

In the shorter term, aeroponics is set to become a game changer in cannabis production, increasing yields, quality and consistency while providing an opportunity for innovative companies to establish themselves in a fast-growing industry.

2 responses to “Aeroponics Could Revolutionize Both Cannabis and Food Production”