Silver is an extremely rare metal only occurring in igneous rock at a concentration of only 0.07 parts per million. For comparison, copper is approximately 785 more prevalent. Due to its rarity, the main concern in gauging the potential value of a silver deposit is the amount of metal present. 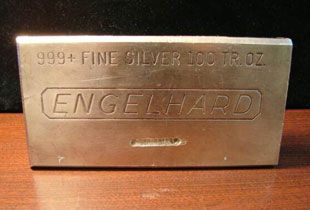 Silver is an extremely rare metal only occuring in igneous rock at a concentration of only 0.07 parts per million.  For comparison, copper is approximately 785 more prevalent.  Due to its rarity, the main concern in gauging the potential value of a silver deposit is the amount of metal present. Further complicating the estimation is the fact that silver is almost always mined in conjunction with another metal.  Therefore, in addition to the concentration of silver present, the economics of the other metal come into play in determining the value. There are many ores that contain silver as the most valuable mineral, but deposits with silver as the only constituent are extremely rare.

Silver is mined through both open-pit and underground mining methods, depending on the deposit characteristics. When it comes to deciding which mining method to employ, miners should choose the one that accesses the most amount of metal.  In certain cases, both underground and open-pit methods may be used in conjunction to extend the life of the mine. When it comes to estimating the cost of mining for a particular deposit, the deposit’s tonnage is all that is needed.

Production cost per tonne is important in the economics of a mine.  Unlike other metals such as copper and gold, an average per tonne cost of extracting silver is rarely quoted. This relates back to the fact that silver is almost always mined in conjunction with other metals. The economics of each deposit are “type specific” and vary greatly depending on what other metals are present in the ore. On the other hand, an operating mine will most often quote a per-tonne production cost that is specific to that mine.

Silver-bearing ores are mined, then crushed and ground. Since virtually all the ores are sulfides they are amenable to flotation separation, which can concentrate the metal by up to 40 fold.  Due to the high value of silver, a mine’s recovery rate is an important statistic to regard when determining the value of a silver mine; the higher the recovery rate, the better.

Silver is almost always found in conjunction with gold.  As gold is also a highly revered precious metal, the amount present greatly influences the economics of a mine. Lead- silver mines supply the greatest portion of lead in the United States, however, do not offer much gold.  High-grade silver mines normally have considerably less base metal content than lead-silver deposits; but instead can contain a significant amount of gold.

These include: (a) The gold and silver ores; (b) ores carrying considerable quantities of iron and manganese oxides with small gold and silver contents; (c) precious-metal bearing ores with copper, lead and zinc in small amounts; and (d) disseminated low grade silver deposits.

These ores typically do not yield much copper or silver, and usually they are of more importance as gold producers, silver being less often associated with the copper.

These mines supply a large amount of lead.  Although lead and silver are usually the most prominent of the metals, there may also variable quantities of other metals such as gold, zinc, and copper. The silver contents in lead-bearing silver ores can be quite high, which makes lead-silver mines one of the more prevalent sources.

These supply only marginal amounts of silver, and are relatively unimportant.

These ores contain at least 25 percent zinc. These yield little gold, and the silver which is obtained mainly as a by-product.

The high price of silver permits the treatment of poor ores and the adoption of more costly methods to achieve the primary goal of maximizing the concentration of the metal.  Most often, mechanical separation methods precede chemical methods.

The Cannington silver mine in Australia is the world’s largest single silver producer. It was discovered by BHP (NYSE:BHP) in 1990, and the mine was commissioned in 1997.  Full production was achieved in early 1999, since then capacity has been expanded from 1.5Mt/y of ore to over 3Mt/y. The mine supplies about 6 percent of the world’s primary silver production, while its lead production represents about 7 percent of the world’s primary lead output. The lead concentrate contains 70 percent lead and over 3,000g/t silver with low levels of impurities. At the end of 2005, the orebody contained proved sulphide ore reserves of 18.0Mt grading 477g/t silver, 10.7 percent lead and 3.9 percent zinc. Measured resources totaled 2.3Mt at 536g/t Ag, 11.94 percent lead and 4.49 percent zinc. The metallurgical recovery rates for zinc, lead and silver were 66 percent, 88 percent and 84 percent respectively.  At this stage of mining, all extraction is competed via underground mining.

Fresnillo’s (LON:FRES) Proano mine in Mexico.