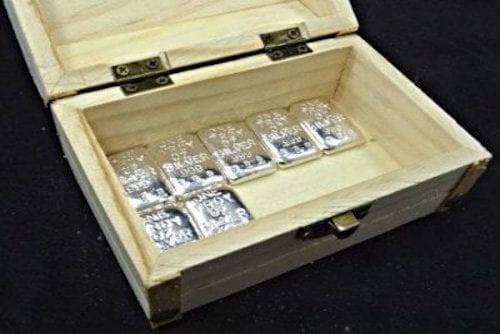 What are the pros and cons of investing in silver bullion? Read on to learn why now may be the time for investors to enter the market.

As with anything in the market, investing in silver bullion has both pros and cons, and what’s appealing to one investor may not be a good choice for another.

Silver just came off a more prosperous year than it has seen in awhile, and as prices rise, many investors interested in the precious metals market are wondering if now is the right time for buying silver bullion.

While the white metal can be volatile, precious metals like silver and gold are also seen as a safety net — as safe haven assets, they can protect investors in times of uncertainty. With tensions running high, they could be a good choice for those looking to preserve their wealth in these difficult times.

With those factors in mind, let’s look at the pros and cons of buying physical bullion in the form of silver.

Pros of investing in silver bullion

1. Silver can offer protection — As mentioned, investors often flock to precious metals during times of turmoil. When political and economic uncertainty are rife, legal tender generally takes a backseat to assets like gold and silver. While both gold and silver bullion can be appealing to investors, the white metal tends to get overlooked in favor of individuals investing in gold, even though it plays the same role.

2. It’s tangible money — While cash, mining stocks, bonds and other financial products are accepted forms of wealth, they are essentially still digital promissory notes. For that reason, they are all vulnerable to depreciation due to actions like printing money. Silver bullion, on the other hand, is a tangible asset that is finite. That means that, although it is vulnerable to market fluctuations like other commodities, physical silver isn’t likely to completely crash because of its inherent and real value. Market participants can buy bullion through coins or jewelry, or when they buy silver bullion bars.

Chris Duane, an investor and YouTube figure, has said he puts his metal where his mouth is by liquidating his assets and putting the money into silver bullion when prices get low. He believes that our money system, and indeed our entire way of life, is built on unsustainable debt, and the purpose of investing in silver bullion is to take yourself out of the mathematically inevitable collapse of that system.

3. It’s cheaper than gold — Between gold and silver bullion, the white metal is not only less expensive and therefore more accessible to buy, but it’s also more versatile to spend. That means if you are interested in buying silver coins to use as currency, they’re easier to break than gold because they are lower in value. Just as a US$100 bill can be a challenge to break at the store, divvying up an ounce of gold can be a challenge. As a result, silver bullion is more practical and versatile than physical gold.

4. Silver offers higher returns than gold — Because the white metal is worth around 1/79th the price of gold, buying silver bullion is affordable and stands to see a much bigger percentage gain if silver prices go up. In fact, in the past, silver has outperformed gold in bull markets, according to GoldSilver. GoldSilver claims that, from 2008 to 2011, silver gained 448 percent, while gold gained just 166 percent in that same period. It’s possible for an investor to hedge their bets with silver bullion in their portfolio.

5. History is on silver’s side — Silver and gold have been used as legal tender for hundreds and thousands of years, and that lineage lends the metal a sense of stability. Many find comfort in knowing that this metal has been recognized for its value throughout a great deal of mankind’s history, and so there’s an expectation that it will endure while fiat currencies may fall to the wayside. When individuals invest in physical silver, whether that be through silver bars, fine silver, coins or other means, there is a reassurance that its value has and will continue to persist.

6. Silver offers anonymity — Whether you value your privacy or not, silver has the same benefit as cash in that it gives users a degree of anonymity with regards to spending. Not everyone wants all of their transactions to be a part of the public record, and privacy is a necessary component of democracy, according to Glenn Greenwald’s TED Talk. That is another benefit of the white metal.

Cons of investing in silver bullion

1. Lack of liquidity — There is a chance that if you hold physical silver, it may not be immediately liquid. In order to make common purchases such as groceries, you are not able to use bars of silver, so you will need to convert that to currency first, and the ability to sell in a hurry can be an issue. In a jam, pawn shops and jewelers are an option, but not necessarily the best-paying one.

2. Danger of theft — Unlike most other investments, such as stocks, holding silver bullion can leave investors vulnerable to theft. Securing your assets from looting by using a safety deposit box in a bank or a safe box in your home will incur additional costs. Additionally, the more physical assets that reside within your home, the more at risk you are for burglary.

3. Weak return on investment — Although silver bullion may be a good safe haven asset, it may not perform as well as other investments — for example, real estate, or even other metals.

Stocks may also be a better option than silver bullion for some investors. As Randy Smallwood, president and CEO of streaming company Wheaton Precious Metals (TSX:WPM,NYSE:WPM), has said, “Streaming companies will always outperform bullion by itself.” He attributes this to organic growth and dividend payouts that bullion doesn’t provide.

Where is silver headed?

Finally, it is important to look at where analysts believe the white metal is headed.

David Morgan, publisher of the Morgan Report, told the Investing News Network (INN) in mid-2019, “Silver will overtake gold on a percentage return basis once the gold market reaches a certain level. That level is unknown, but US$1,550 is probably a good, educated level based on sentiment in the market when both metals were selling off and moving lower.”

Independent Speculator’s Lobo Tiggre shares Morgan’s sentiment, and told INN last summer that the white metal will go “bananas” when gold does. At the New Orleans Investment Conference that same year, Tiggre, who is CEO of Louis James LLC, said he still believes in silver’s ascent.

“We haven’t quite slipped on the banana peel yet,” he said. “Silver typically lags gold and then it catches up with gusto.”

Tiggre believes that silver is the better buy than its sister metal gold, and said he was looking to purchase more of the bullion for his own portfolio. “I am not too religious about silver versus gold — they’re pretty interchangeable — but silver is just a better deal right now.”

In terms of prices, FocusEconomics‘ latest consensus forecast indicates that panelists expect silver to average US$17.90 in Q4 2020 before ticking down to an average of US$17.60 in Q4 2021.

With all of these factors in mind, silver investors may want to reflect on the pros and cons from their own personal lens before deciding whether to build up their stockpile of silver bullion. Timing is also an important factor for those who want to reap the benefits of the white metal.

17 responses to “Should You Invest in Silver Bullion?”