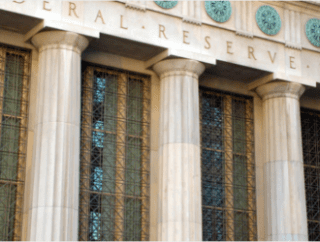 This week’s Federal Open Market Committee (FOMC) meeting is being described as a “non-event” for gold.
The meeting wrapped up Wednesday (May 3) at 2:00 p.m. EST, and brought few surprises for market watchers. FOMC members unanimously voted to leave interest rates unchanged at 0.75 to 1 percent, and expressed some misgivings about the US economy.
Officials noted in a statement that “economic activity slowed” while “household spending rose only modestly,” but did say that they see growth accelerating later in the year.
“The Committee … continues to expect that, with gradual adjustments in the stance of monetary policy, economic activity will expand at a moderate pace, labor market conditions will strengthen somewhat further, and inflation will stabilize around 2 percent over the medium term,” they also said.

Explaining gold’s price movement, Kitco’s Jim Wyckoff said, “[t]he sellers have some momentum amid a lack of fresh, bullish news to support the safe-haven metal. The just-released FOMC statement contained no surprises[,] the markets were not significantly impacted.”
He added that upcoming economic and political developments are likely to have a greater impact on the yellow metal. Those include a US employment report scheduled for release on Friday and France’s presidential election this weekend.
Prior to this week’s meeting, many market watchers expected the Fed to hike interest rates again at its June meeting. Now, however, the central bank’s next steps are uncertain. “The Fed left all the options on the table without committing to anything,” said Adam Button, a currency analyst at ForexLive.
Gold tends to fare better when interest rates are low and often struggles when interest rates are higher.
Don’t forget to follow us @INN_Resource for real-time news updates.
Securities Disclosure: I, Charlotte McLeod, hold no direct investment interest in any company mentioned in this article.

One response to “Gold Price Under $1,250 After FOMC Meeting”