What were the main uranium trends in 2020? From COVID-19 to a price rally, it has been an eventful year for the metal.

Uranium was one of the best-performing commodities of the year, climbing 37 percent at its peak. While other resources were weighed down by economic challenges in March and April, the U3O8 spot price rallied, climbing to a four year high in May.

The whirlwind of activity that the sector experienced in 2020 follows years of inactivity.

Efforts to control the spread of COVID-19 shuttered the world’s top-producing asset, creating a reduction in production that will impact the market well into 2021.

Uranium trends 2020: A strong start to the year

2020 started with prices rangebound at US$24.63 per pound, a slight decrease from December 2019. Worsening relations between the US and Iran reached a fever pitch when US President Donald Trump gave the green light for a drone attack that killed Iran’s top general, Qassem Soleimani, in January.

Iran retaliated with an air assault that mistakenly downed a Ukraine-bound passenger jet. Simultaneously, the Islamic Republic further distanced itself from the Joint Comprehensive Plan of Action, a multinational Obama-era nuclear deal.

Listen to Rick Rule of Sprott (TSX:SII,NYSE:SII) make the case for patience with uranium.

By February, uranium had climbed to US$24.80 ahead of Trump’s announcement that he would earmark as much as US$35 billion to fund the country’s “energy independence.”

As part of his 2021 budget proposal, the head of state called for US$150 million annually be spent on building a domestic uranium stockpile.

“This year’s budget underscores the importance of nuclear security by increasing funding to modernize and maintain our nuclear stockpile. It focuses on intradepartmental collaboration to advance cross cutting priorities such as energy storage, security, reliability and resilience,” US Secretary of Energy Dan Brouillette said in a press release at the time.

Although it was just a proposal, and it will take years to build domestic output levels that high, many were confident that the tone of the announcement was promising for the US nuclear sector.

The second month of the year also saw industry leader Cameco (TSX:CCO,NYSE:CCJ) offer optimism for the sector. The top North American uranium miner spoke of positive demand trends and the shrinking of a global surplus as long-term drivers.

“Our optimism and confidence in a uranium market transition is growing, driven by the long-term fundamentals,” said President and CEO Tim Gietzel during a conference call. “The longer the transition takes, the greater the likelihood that the uranium price will go beyond what is required to incentivize tier one production to return to the market.”

Knowing just how much of the energy fuel is out there is notoriously hard to gauge — when Japan temporarily suspended its nuclear program in 2012 for thorough inspection, it is believed to have had a significant stockpile of the reactor fuel.

Listen to Mercenary Geologist Mickey Fulp discuss the factors that will motivate uranium.

In 2015, several years after the Fukushima meltdown, Japan began to restart its nuclear reactors. To date, there are nine reactors in operation with an additional 18 awaiting restart approval.

There is no domestic uranium production capacity in Japan, making the island nation reliant on supply deals with foreign producers.

By mid-March, global markets were in swan dive, and even safe haven assets like gold and silver had sunk to year-to-date lows. COVID-19-related lockdowns in Canada led Cameco to temporarily shut the world’s top-producing uranium mine.

The closure, supply concerns and transportation issues pushed uranium prices to US$27.35.

As Philip Johnson, vice president of fuel cycle at UxC, explained, the curtailments were widespread across the industry and sent prices higher.

“In addition to Cameco’s Cigar Lake suspension announcement, Kazakhstan’s Kazatomprom halting wellfield development through the middle of the year, in addition to trimming its 2020 production guidance, (motivated prices),” he said.

“Other uranium projects in Namibia and South Africa experienced COVID-19 pandemic-related production declines, albeit to a lesser extent. The market is also preparing for imminent loss of production of two longstanding mines in Australia (Ranger) and Niger (Arlit).”

By early May, deeper output restraints began to emerge and continued to support price growth. The disruptions prompted nuclear fuel research firm UxC to project a uranium output decline of 13.1 million pounds for 2020. That’s roughly a 10 percent reduction from its pre-pandemic forecast.

“Kazatomprom cut back on its production plans as well, which is huge,” said Lobo Tiggre of Independent Speculator via email. “They even said they might have to buy on the spot market to meet their contractual obligations.”

With the two leading uranium miners proposing spot market purchases, the U3O8 spot price reached a four year high of US$33.93 in May. The 37 percent year-to-date rally prompted market watchers to speculate that uranium’s long-awaited bull market had arrived.

Uranium trends 2020: Energy and the election 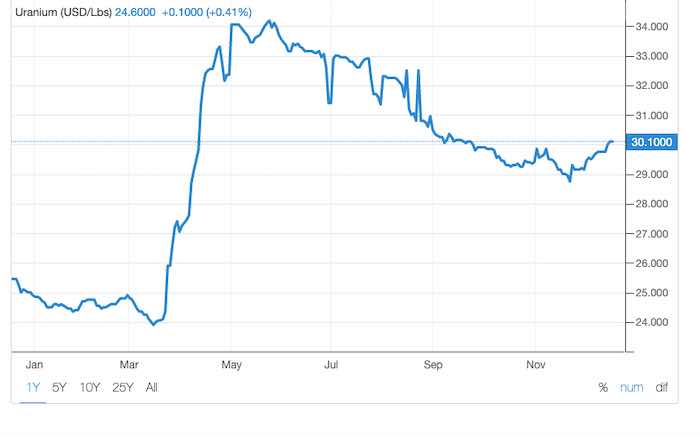 However, uranium was unable to maintain the US$33 level and began to soften over the next eight weeks, slipping to US$32.45 by the end of July.

September marked the first time the U3O8 spot price had dipped below US$30 since April. The slight correction and the spot price’s ability to remain near US$30 were positive indicators for Tiggre.

“Uranium has been rising to new highs and retreating to a series of higher lows since 2016,” he said during a July interview. “To me, the breather after this spring’s big rally looks perfectly normal — and I see it as an opportunity.”

The fall also brought hope to the sector in terms of US election promises, as both Trump and Joe Biden had stated their support of nuclear energy initiatives.

Currently, 20 percent of America’s electricity is generated through nuclear energy, and that number will need to be bolstered alongside renewable sources if the country aims to reduce greenhouse gas emissions and carbon pollution.

Since the November presidential election, the Senate Committee on Appropriations has released a draft for 2021 spending; in it there is a budget line of US$150 million for Trump’s strategic uranium stockpile, which could be another price catalyst.

“Establishing a uranium reserve in addition to a somewhat nuclear-friendly incoming presidential administration are definitely positive influences on the market at hand,” said UxC’s Johnson. “However, it’s important to note that both initiatives will likely only show real market impacts over the longer term.”

“While the uranium reserve is a good thing for the beleaguered US uranium producers selected to supply the reserve, it remains to be seen how this initiative translates into direct pricing impacts, since most US production today is already absent from the market,” explained Johnson.

“Moreover, creating a uranium reserve also generates a future supply source for the market, which, in turn, has a tendency to stem upward price momentum.”

After successfully restarting Cigar Lake mine after a five month curtailment, Cameco recently shut down operations again. The decision to put the project on care and maintenance came after several positive cases of COVID-19 detected at the site.

“Due to the suspension, we plan to increase our purchases in the market to secure uranium we need to meet our sales commitments,” Cameco’s Gitzel said. “COVID-19 has taught us many lessons, including that the pandemic is a greater risk to uranium supply than to uranium demand.”

In its Q3 financials, the uranium major reported an adjusted net loss of C$78 million. The closure of Cigar Lake leaves Cameco with no output in Canada. In 2018, the producer closed the McArthur River mine indefinitely, citing weak prices.

The cost of care and maintenance is estimated to be C$8 million to C$10 million per month. Additional costs may also be incurred as the company makes purchases on the spot market to fulfil contracts.

“Given the timing of the suspension, we do not expect these costs would begin to impact our results until the first quarter of 2021,” reads Cameco’s press release.

Kazatomprom is also anticipating the long-term impacts of the pandemic. 2020 will see production for the Kazakh company decline 16 percent year-over-year. Despite the reduction, the firm has extended earlier production cuts into 2022.

“The decision to keep production similar year-over-year, and extend production curtailment into 2022, is indicative of a global uranium market that is still recovering from a long period of oversupply,” said CEO Galymzhan Pirmatov.

“We are simply not seeing the market signals and fundamental support needed to ramp up mine development in 2021 and take our low-cost, tier one production centres back to full capacity in 2022.”

Nickel Mines in Australia
MagicMed Industries: Establishing a Library of Novel Psychedelic Derivatives
What’s Ahead for Capital Rasings on the ASX in 2021?
US Cannabis Prepares for M&A in Anticipation of Legal Changes