While uranium mining in the United States pales in comparison to world leading producer, Kazakhstan, production in the North American country has started swinging upwards again in 2016. 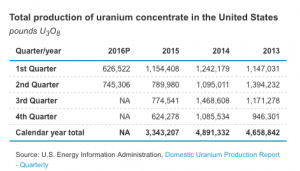 Uranium mining in the US: on the rise?

Currently, uranium mining in the US is only done by a handful of companies, as per the World Nuclear Association (WNA). Despite this, exploration projects have been on the rise with operating mines in Wyoming, New Mexico, Arizona, southern Utah, Colorado and Texas.
In particular, the restart of production at the White Mesa uranium mill in Utah has been vital to the ramp-up in the US, bringing the number of facilities in the country up to seven.
What’s more, the WNA notes that conventional uranium mining in the US is resuming “after some years.” For 2016, they note that the EIA estimated US uranium resources to be 25,400 tonnes of uranium at $78 per kgU, 64,000 at $130 per kgU and $139,500 at $260 per kg.

Uranium mining in the US: top companies

With all of this in mind, here’s a look at uranium production in the US by some of its top performing companies.
Cameco (TSX:CCO,NYSE:CCJ)
No uranium list is complete without mentioning Cameco, which is the largest producer of uranium in the US. It has two uranium mines in operation: the Smith Ranch-Highland mine in Wyoming’s Powder River basin and the Crow Butte mine in Nebraska. Between the two mines, 708,000 pounds of uranium were produced in 2015. At the halfway mark of 2016, however, uranium production by the company’s Crow Butte operation is expected to decrease over time. Still, between the two operations, Cameco expects to produce 1.1 million pounds, which is up from 2015 production.
Uranium One (TSX:UUU)
While Uranium one is a mining company based in Canada, it is one of the largest uranium producers with portfolios around the world, including the US. The company wholly owns the Willow Creek mine in Wyoming. Production at Willow Creek has dropped drastically since 2012’s 362,000 pounds of uranium produced to just 45,000 pounds in 2015.
Ur-Energy (NYSE:URG)
Ur-Energy operates the Lost Creek in-situ recovery uranium facility, which is also located in Wyoming.  The facility has a two million pounds per year of physical design capacity. So far this year, the company has captured 292,600 pounds of uranium, and 304,100 pounds of dried and drummed uranium. The company has said production rates at the operation for the quarter were near projected levels, even if lower than the previous quarter. “The decrease is related to normal projected declines,” the website reads.
Energy Fuels (NYSE:UUUU)
And, of course, there’s Energy Fuels, who operates the White Mesa mill which is allegedly the only fully-licensed and operating conventional uranium mill in the US. Between 2011 and 2015, White Mesa produced 21 percent of all uranium production alone.  In 2015, production dropped to 114,000 pounds from a soaring 362,000 the year before. However, with the mill under operation again, it will be interesting to see how much production will ramp back up for the latter half of the year and going forward.

Get My Free Report
Don’t forget to follow us @INN_Resource for real-time news updates.
Securities Disclosure: I, Jocelyn Aspa, hold no direct investment interest in any company mentioned in this article.