The uranium spot price has climbed by 36 percent since January, propelled by supply instability and COVID-19 closures. Has its time finally come?

After years of sluggish growth and persistently constrained price activity, the uranium sector is finally starting to heat up, raising the hopes of sector bulls.

The spot price of the energy fuel has been rocketing higher since bottoming out in the US$24 per pound range from late December 2019 to mid-March of this year.

Currently trading for US$33.50, the U3O8 spot price has climbed by 36 percent since January, steadily moving higher as diverse factors impact near- and long-term supply and demand trends.

Is this rapid price increase sustainable, and does it mean it’s time for uranium to shine after years in the doldrums? The Investing News Network asked experts to share their thoughts on how the market got here and what could be next — read on to learn what they said. 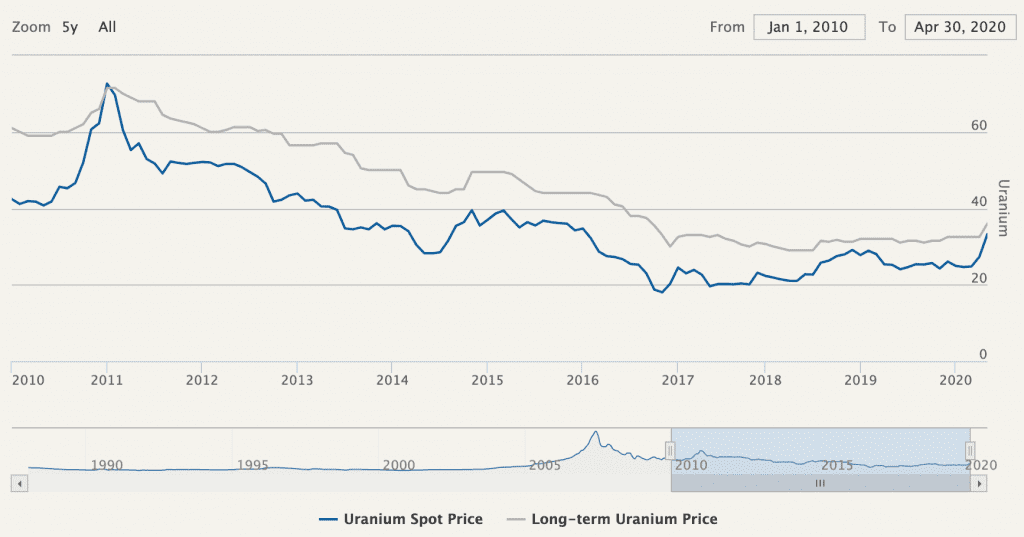 Stockpiled supply, steady production and the loss of nuclear reactors continued to weigh on price growth in the years after that, preventing any gains above US$29.

Some optimism reared its head in 2018, when the US government launched a Section 232 investigation into uranium imports — the country is the largest consumer of the energy fuel, yet domestically produces less than 1 percent of its own demand.

Experts weigh in on the Section 232 investigation in March 2019.

Concern around imports coming from Kazakhstan, Russia and China — numbers one, six and eight in terms of uranium production by country — served as a catalyst for the lengthy investigation.

Rumors surfaced that the final decision would include a domestic quota of as much as 25 percent, and there was talk that Canada and Australia — numbers two and three in annual production — would receive friendly trade exemptions.

The uncertainty around Section 232 made the already opaque market more obscure to decipher for the remainder of 2018, and that was further compounded as the deadline for a Section 232 decision was moved back numerous times.

Early 2019 saw some seasonal price movement as the U3O8 spot price hit US$28.90 in January — its highest level for that year.

In mid-July, the long-anticipated Section 232 report was released, and much to the dismay of nuclear sector watchers and participants, it was devoid of any steadfast outcomes, aside from the formation of the Nuclear Fuel Working Group (NFWG). The committee, comprised of market insiders, utilities companies and politicians, was tasked with assessing the entirety of the American nuclear sector.

By January of this year, a pound of U3O8 was moving on the spot market for US$24.63, unable to even gain seasonal price mobility.

COVID-19 sets off flurry of activity

At the end of February, years of inert, snail’s pace activity were upended when US President Donald Trump, without receiving the NFWG’s report, announced his 2021 budgetary plans. Included was funding for a domestic uranium stockpile to the tune of US$150 million annually.

In the weeks that followed, the COVID-19 pandemic forced mining, milling and refinery projects around the world to curtail output, and the NFWG released its recommendations. Combined, these points all resulted in a significant U3O8 spot price jump.

In mid-March, Cameco (TSX:CCO,NYSE:CCJ), the largest publicly traded uranium miner globally, suspended production at its Cigar Lake mine in compliance with the Canadian government’s COVID-19 shutdown of non-essential services.

The mine, located in Northern Saskatchewan, was the company’s last producing asset in operation. In 2018, the sector major indefinitely closed its McArthur River mine and Key Lake mill due to persistently low spot prices; they were originally shut down in 2017

Cameco extended the mine shuttering for Cigar Lake in mid-April and withdrew its 2020 output outlook. In its Q1 report, the company reported a 13 percent drop in quarterly production; however, sales volume was up 25 percent year-on-year to 6 million pounds.

The U3O8 spot price was trading flatly at US$24.80 at the end of February, and subsequently climbed higher, ending March almost US$3 higher month-over-month at US$27.60.

By the end of April, the U3O8 spot price had grown by another US$6 to reach US$33.25. The increase prompted many to speculate that the highly anticipated uranium bull market had arrived at last.

Philip Johnson, fuel cycle vice president at UxC, explained during a Red Cloud uranium webinar that March saw 9 million pounds move on the spot market, making it one of the most active months historically in the uranium space.

“March’s 9 million pounds is going to put us in the first quartile for highest spot volume booked in a month ever,” he said. “Moreover, that month saw a historical new record for total number of individual spot deals booked at 76 — that is tremendous.”

Johnson also noted that most importantly, the majority of the activity occurred in the last two weeks of the month. That means it followed the decision by Cameco and several other uranium producers to curtail and or close mines and mills.

The end of April also brought the release of the highly anticipated NFWG report. It focuses largely on building the country’s uranium production, nuclear energy generation, technological innovation and re-staking America’s dominance in the sector.

“The clear outcome of the Working Group’s efforts is confirmation that it is in the nation’s national security interests to preserve the assets and investments of the entire U.S. nuclear enterprise and to revitalize the sector to regain U.S. global nuclear leadership,” it reads.

While ambitious, none of the recommendations have start or end dates, although the report does support Trump’s budgetary proposal of US$150 million annually for a uranium stockpile — starting with 17 million to 19 million pounds in 2020.

Even so, sector watchers believe the report offers some finality to a prolonged period of uncertainty.

“The initial reaction from me was it’s good that at least it’s over now,” said Nick Hodge of the Outsider Club. “That is probably the biggest positive that came from it is just closing this chapter of the uranium market and being able to let companies, investors and fuel buyers look ahead to what’s next.”

“Yes, uranium has moved from US$24 to US$32 a pound, and in the spot market that’s a big move, no doubt,” said the Resource Maven. “But a uranium market when it goes, goes absolutely wild. And so there’s a huge amount of room left when this happens.”

“The worst performers in the uranium space in the last bull market gained 800 percent,” she said. “The best obviously gained thousands of percent. So uranium markets are crazy, and this one has been setting up for a long time.”

Rick Rule of Sprott talks about the uranium market in January 2020.

COVID-19 suspensions may have sped up the energy fuel’s rise, but as Preston pointed out, the closures only made it more apparent that new supply is needed.

“And people are starting to pay attention,” she said.

Other uranium price catalysts to note

For Hodge, the closures and NFGW report are small catalysts in terms of the larger elephant in the room, which he sees as utility contracting.

“The answer is actually what it was before the virus, and before the NFWG decision, because it’s dependent on the utilities — and it was three months ago, it was six months ago and it’s now still dependent on them. But what you have now is a bunch of dominoes that have already fallen over,” said the president and founder of the Outsider Club.

Coronavirus lockdowns and the NFWG report, which notes that the US government is now looking for 17 million pounds of uranium, should be red flags for electricity-generation companies, he said. They will need to replenish stores of fuel and enter new contracts to procure uranium.

“If you are a fuel buyer for a utility company, you are probably starting to write memos to your boss like, “Hey sir, the price of uranium is up to the 2016 price already and that happened in a couple of weeks. We might want to start talking about contracting for uranium because our contracts roll off in X year,’” explained Hodge.

“If we thought they were going to come back in 2021 or 2022, maybe that is moved up six months or whatever, so we see higher prices,” he continued.

“I think higher prices beget higher prices, especially once the utilities come back in, because the reason why prices can move so high so quickly in the uranium space is because utilities really don’t care what they are paying. (That’s) because the price of the uranium is such a small component of building and operating and maintaining a nuclear plant.”

All things considered, where is the market at?

The price of uranium is likely to continue rising in the short term, motivated by a dramatic decrease in production across the board, which will be further compounded by both Cameco and the US looking to make significant purchases on the spot market.

2020 production totals will be impacted by project shutterings and curtailments, as well as supply chain challenges. While tallies will ultimately depend on the duration of COVID-19 lockdowns, the positive price movement does make bringing new projects online more feasible with every incremental rise.

The sector often uses US$50 as a base threshold to entice developers and juniors — a price that gets exceedingly closer week after week, which bodes well for juniors in the space.

He cited Kazakhstan taking 30 to 40 percent of global supply offline during its closures and Cameco idling Cigar Lake indefinitely as some of the positives for explorers and developers.

He went on to highlight how the market is supporting juniors.

“It means rising prices — we have already seen the spot uranium price go to US$33, so projects just inherently become more attractive, more economic, with better rates of return as the price of underlying commodity rises,” he said.

“If you pay attention to the press releases, you know everybody in the past week was out touting the NFWG decision and touting their project, because they know people are going to be out there looking.”

Hodge went on to say that Texas-based Uranium Energy (NYSEAMERICAN:UEC) is looking to restart its operations due to the spot price movement.

“Azarga Uranium (TSX:AZZ,OTCQB:AZZUF) (was) able to raise an oversubscribed private placement, which never would have happened two months ago — those are some of the positives right off the bat.”

But even assuming the spot price trends higher month-over-month and the elusive US$50 mark gets closer, Hodge warned against being too optimistic that it will get there this year.

Editorial Disclosure: Azarga Uranium is a client of the Investing News Network. This article is not paid-for content.