It’s only Tuesday, but so far this week has been a big one for the natural gas space. 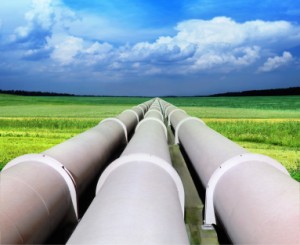 It’s only Tuesday, but so far this week has been a big one for the natural gas space. For one thing, tension between Russia and Ukraine came to a head over the weekend when the ex-Soviet nation cut gas supplies. Meanwhile, in China, state-owned CNOOC is slated to sign a long-term, $20-billion gas deal with BP (NYSE:BP,LSE:BP).

Natural gas investors should be aware of both events. In the case of the first, that’s because in the past, Russian gas shut offs to Ukraine have caused prices for the fuel to spike across Europe; news outlet RT notes that analysts expect this time to be no different.

According to Forbes, the cut off came after talks aimed at trying to reach a solution between the two countries fell apart. Russia says that Kiev currently owes $1.95 billion, and has said that it wants Ukraine to start making payments in order to keep receiving gas. Russia offered to cut its asking price down to $385 per thousand cubic meters of LNG from $485, but that price is still well above what Ukraine says is fair.

Where will Europe get its gas from?

The Globe and Mail states that the halt of supply “is not expected to cause major disruptions to Ukraine, at least not in the short term,” noting that a proactive gas deal between Ukraine and Slovakia in light of the dispute would at least mitigate some of the damage. Similarly, Russian news outlet ITAR-TASS states that Russia is making plans to skirt Ukraine and continue to supply natural gas to Europe. ITAR-TASS quotes Gazprom (MCX:GAZP) CEO Alexei Miller as saying, “[w]e are ready to increase the supply of gas to the European Union’s underground gas storage facilities at our own expense.”

However, according to Reuters, there are still fears that once Ukraine’s stores are used up over the summer, Russian gas will have trouble making it all the way to EU customers. And, as Gas Investing News has noted in the past, there is no simple solution for an alternative gas supply. Interested investors may want to look up gas exploration projects in Europe, as they could prove interesting as political events continue to develop.

Perhaps even more interesting for gas investors is China’s $20-billion, long-term gas deal with BP, which was announced today. As The Wall Street Journal reported, documents have not been signed yet, but BP will sign a 20-year deal with China’s state-owned CNOOC in London this week. The deal is extremely small compared to the one that Gazprom recently secured for $400 billion, but it is still very important.

Amidst articles at the end of May stating that the China-Russia deal will be the death of “BC’s LNG dreams,” focused private equity investor ARC Financial published a different opinion: it said that the province in fact will not miss its opportunity for LNG exports.

Referring to the long-term contract between China and Russia, the article notes, “[b]y 2025, China alone will need the equivalent of 16 of those deals to satiate its energy appetite.” The recent, albeit smaller, deal with BP certainly looks to fall in line with that prediction, and is important for investors gauging LNG projects in Canada or North America.

BP and Gazprom are not the only gas companies that have been active lately. Last Thursday, PanTerra Resource (TSXV:PRC) entered into an arm’s length purchase and sale agreement for the acquisition of certain natural gas assets in British Columbia. According to PanTerra’s press release, the assets are producing roughly 6,500 BOE per day and hold a total proved plus probable company gross reserve base of 30.39 MMboe. In addition, PanTerra announced a $100-million bought-deal financing.

Today, BRS Resources (TSXV:BRS) stated that its operational partner, AleAnna, plans to drill three exploration wells in Italy’s Po Valley and will also commission four new high-resolution 3D geophysical surveys in the area. Currently, AleAnna has applied for several drilling permits on two areas and is preparing applications for others. The operator has also contracted an environmental impact study.