It is the second such agreement announced with the automaker in a number of weeks.

Pure Energy Minerals (TSXV:PE) announced Wednesday morning that it has signed a lithium supply agreement with Tesla Motors (NASDAQ:TSLA). That is the second such agreement announced with the automaker in a number of weeks.
Under the agreement, Pure Energy will potentially supply Tesla with lithium hydroxide from its Clayton Valley project in Nevada, which is still being developed. The company still needs to conduct a preliminary economic assessment, prefeasibility study and/or feasibility study in order to determine the viability of the project.
For its part, Tesla will commit to annual purchases over five years at a predetermined price below current market rates. No pricing information was given in Wednesday’s release, and the company stated, “[c]ertain information relating to future pricing formula and forecasted deliveries has been omitted on the basis of confidentiality and on the basis that the Agreement is subject to various conditions in relation to project execution, product quality, pricing and timing of delivery.”


“This agreement with Tesla is a significant milestone that validates Pure Energy’s lithium brine project and business development model, and is an important step in the development of the Project,” said Pure Energy CEO Robert Mintak in a statement. “Pure Energy is aligned with both Tesla’s and the State of Nevada’s development objectives, and we hope to positively contribute to Nevada’s booming clean energy based economy.”

The deal comes just weeks after Tesla entered another conditional supply agreement with Bacanora Minerals (TSXV:BCN,LSE:BCN) and Rare Earth Minerals (LSE:REM) for lithium hydroxide from the Sonora clay-based lithium project in Mexico. That project is also still in development.
The announcement regarding that agreement also did not include specific volumes or pricing information. Still, a number of analysts said at the time that they expected the electric vehicle manufacturer to sign further agreements with junior mining companies.
There was also some criticism of the deal, with Chris Berry of the Disruptive Discoveries Journal calling it an “out of the money call option,” and explaining in a post that such arrangements “have no intrinsic value … but are effectively used as a hedging strategy to lock in a given price in the future.”

The Bacanora deal also sparked the ire of some in Nevada, who had hoped for Tesla to sign on with one of several lithium juniors in Nevada. The only currently producing lithium brine operation in the US also happens to be in Nevada.
As Benchmark Mineral Intelligence notes, Scott Lucas, politics editor at the Las Vegas Sun, took to Twitter (NYSE:TWTR) to ask why the company had taken $1.25 million in tax breaks from Nevada only to go to Mexico for its lithium. Tesla CEO Elon Musk responded, stressing that the deal is highly conditional and stating that Tesla was definitely looking at Nevada sources of lithium as well. 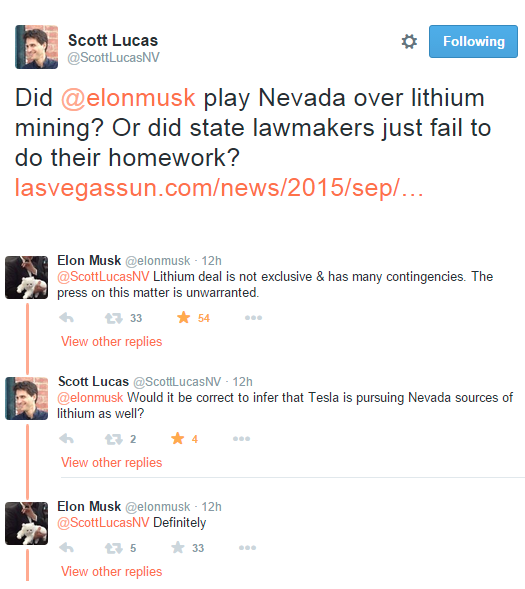 Pure Energy’s Clayton Valley project is located next to the Silver Peak lithium brine mine, which is controlled by Albemarle (NYSE:ALB). Silver Peak is the only producing lithium operation in the US.
The share price of Pure Energy Minerals was up 10 percent, to $0.88, as of 10:41 a.m. EST on Tuesday, with 1.77 million shares of the company trading hands vs. a daily average of 675,488. Pure Energy has gained 27 percent in the past five days and is up 319 percent year-to-date.

Tesla "Doesn't Have a Demand Problem," but What About Battery Metals Supply?

Top Battery Metals Stocks on the TSX and TSXV

Following shareholder approval at the Company's Annual General Meeting held on 30 November 2021, the change of company name from Orocobre Limited to Allkem Limited has been completed.

The Company's new ASX ticker is "AKE" (from "ORE") which is effective from today's date.

Latin Resources Limited (ASX: LRS) ("Latin" or "the Company") is pleased to provide an update of recent and ongoing activities at the Company's Salinas Lithium Project in Brazil ("Salinas" or the "Project"), where the Company has defined multiple drill targets and submitted drill permits to commence drilling. The Company has also secured two new highly prospective tenements to grow its footprint at the project area (Figure 1) with known outcropping high-grade lithium spodumene bearing pegmatites.

Arcadia Minerals Ltd (ASX:AM7, DAX:8OH) (Arcadia), the diversified exploration company targeting a suite of projects aimed at Lithium, Tantalum, Nickel, Copper and Gold in Namibia, is pleased to announce that it has listed on the Frankfurt Stock Exchange under ticker code DAX:8OH.