Lithium experts talk about countries outside of China developing vertically integrated strategies and whether it is a wise move for all.

The development of lithium supply chains in countries and regions outside of China has been a major topic so far in 2019, as regions like the US, Europe, Australia and Chile take steps to challenge China’s reign — a tough goal and a long journey given current market dynamics.

To get lithium from mines to electric vehicles, there are 15 steps in five different stages: mining, chemical processing, cathode or anode production, battery cell manufacturing and end use, according to Benchmark Mineral Intelligence.

The opportunity for countries to benefit from more than just lithium production is backed by numbers. By 2025, the market for mined lithium raw material could be worth US$20 billion, refined products could be worth US$43 billion and battery cells US$424 billion, as per a study by Australia’s Association of Mining and Exploration Companies.

Currently, China dominates the chemical sector and accounts for over 60 percent of battery capacity for its electric vehicle industry. However, it seems many countries are waking up to the reality of the energy revolution and are starting to consider developing their domestic supply chains — but is that a strategy worth pursuing for all?

Since the start of the year, the US has been receiving a lot of media attention regarding raw materials and how little control the country has over its supply chain. To put that into context, Benchmark Mineral Intelligence states that, in 2018, the country’s dependency on imports of lithium was 92 percent.

When the attention turns to battery manufacturing capacity, the US is well behind China, with total capacity reaching only 10.1 percent for the North American country in 2018 versus China’s 68 percent, with little change expected in the next 10 years given current plans.

In Europe, the European Investment Bank has committed in principle 350 million euros to support Northvolt’s lithium-ion battery cell factory in Sweden. France and Germany have joined forces on a plan worth up to 6 billion euros to develop electric car batteries in the region.

Europe’s battery manufacturing capacity reached 6.6 percent in 2018 and is expected to increase to 17.2 percent in the next 10 years, but where these megafactories will source and refine these raw materials is still uncertain. 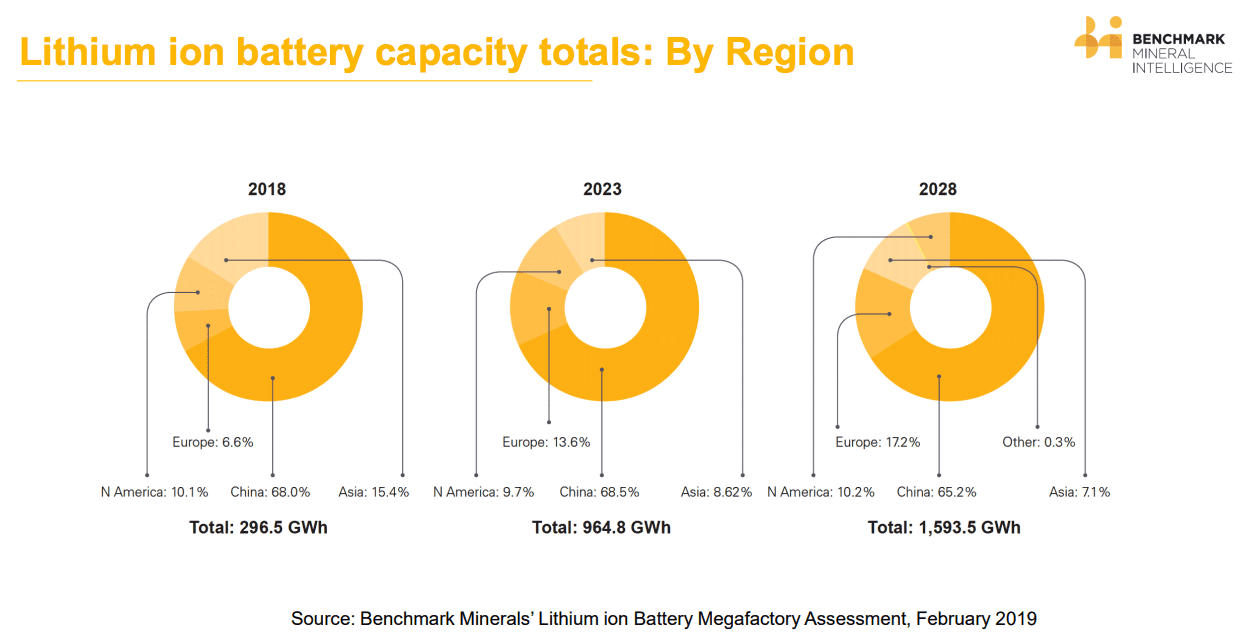 US and Europe need vertical integration

Speaking about whether pursuing a vertically integrated strategy makes sense for countries outside of China, Chris Berry of House Mountain Partners said it is a wise move, but one that is not for everyone.

“Let’s face it, the demand is in Asia, is in China, in Japan, in Korea … the supply chains are going to have to be geographically reasonably close.”

He believes a vertically integrated strategy would make sense in places like Western Europe and the US.

Echoing Berry’s comments was Howard Klein of RK Equity, who said the security of supply chains in the US and Europe is absolutely essential.

“We cannot have all of lithium chemical production, or a very significant component of that, in China,” he said, pointing to what happened with rare earths as an example.

“Having lithium mining close to where the manufacturing of cathodes and batteries are is important,” Klein added, mentioning Savannah Resources’ (LSE:SAV) project as his pick in Europe and Piedmont Lithium (ASX:PLL,NASDAQ:PLL) in the US.

In fact, as battery manufacturing capacity in Europe starts to pick up, the industry will want supply chains to be as short as possible.

“I think yes, there will be (battery capacity) and it’s a long-term project, we are only at the very start of it now, but it is going to go on for decades, so with time there will be more local supply,” said Fastmarkets Head of Base Metals and Battery Research William Adams.

“It is quicker to bring on new (battery) capacity than it is to bring on new mines,” he added. “I am more concerned down the road as to whether there will be enough lithium to feed the demand … It will be hard for the supply chain to keep up with the demand.”

Success may be elsewhere for Australia and Chile

However, going further downstream in the supply chain might not make sense for all countries.

Klein said he is skeptical about cathode and battery output in countries like Australia and Chile, despite the fact that they are top lithium producers.

In 2018, Australia’s lithium output reached 51,000 metric tons, according to the US Geological Survey. However, to date, there has been no commercial-scale lithium-ion battery manufacturing in the country.

That said, the federal government recently launched a strategy of seeking investment to position Australia as a key player in the sector and gain control over its lithium supply chain.

“I look at the lithium market as the lithium chemical market,” lithium expert Joe Lowry of Global Lithium told INN.

“Australia is a major precursor supplier, but right now they have zero percent of the lithium chemicals market,” he added. “Over the next five to 10 years they will be producing. Right now (my suggestion is make) lithium chemicals and see, because competing with cathode producers in Asia is a tough road.”

For Chile, which has the highest lithium reserves in the world at 8 million metric tons, the opportunities are not in battery production, but in becoming more competitive, according to Daniela Desormeaux of SignumBox.

She believes one way would be to develop capabilities to produce lithium hydroxide directly from brine.

In fact, one of the steps Chile has taken is signing contracts with the two producers in the country, SQM (NYSE:SQM) and Albemarle (NYSE:ALB), which have agreed to sell 25 percent of their lithium production at a favorable price for a value-added program.

China’s dominance a reality for all regions

For Benchmark Mineral Intelligence Head of Price Assessments Andrew Miller, the reality is that there’s a very long way to go for the rest of the world to catch up with Asia.

“The development of resources in that diversity of supply — I think it’s been slowed a little bit with the lack of investment going into the sector,” he said.

According to the expert, the industry is at a point now where to meet the increasing demand in 2022 to 2023, significant amounts of capital need to start coming into the market in the next six to 18 months. For countries outside of Asia, the question of how to manage supply chains in the most effective way is going to be a continuing issue over the next decade.

“Money is just not going into the market at the speed it needs to allow producers outside of Asia to challenge the dominance in particular of Chinese producers at the moment,” Miller added.

According to Benchmark Mineral Intelligence, over US$120 billion has been committed to building lithium-ion battery megafactories worldwide.

“If you don’t have the raw materials, it’s critical for nations to create the ecosystem for this new industry to thrive. China has done just that,” Managing Director Simon Moores recently said on Twitter.