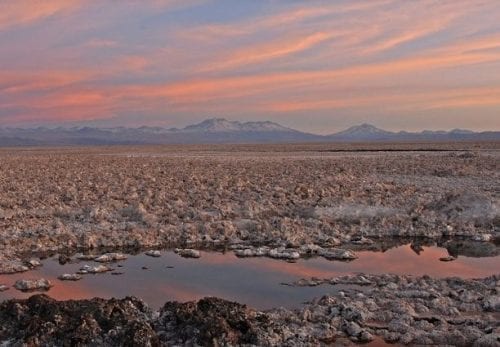 Uranium One Group, a subsidiary of Rosatom, Russia’s state nuclear company, will provide Wealth Minerals with its sorption lithium technology.

Uranium One Group (U1G) has signed a memorandum of understanding to buy up to a 51 percent interest in Wealth Minerals’ (TSXV:WML,OTCQX:WMLFF) Atacama lithium project in Chile.

A subsidiary of Rosatom, Russia’s state nuclear company, U1G will provide the company with its sorption lithium technology, which could boost the quality of lithium extraction and recovery levels.

“The lithium industry’s future growth is about the profound changes happening in the way the world uses energy,” Wealth Minerals President Tim McCutcheon said in a press release.

“Partnering with U1G will help Wealth accelerate the development of lithium projects by using modern technology and moving away from outdated solar evaporation to a more efficient and environmentally friendly sorption technology.”

U1G uses a reusable catalyst material to extract lithium out of brine — eliminating the need for solar evaporation and the physical footprint needed for this type of operation.

Once the deal is closed, the companies will also enter into an offtake agreement that will give U1G the right to purchase 100 percent of the products produced from the Atacama project.

Vancouver-based Wealth Minerals has been developing the asset in a joint venture with ENAMI, the state-owned national mining company of Chile, since March 2018.

Chile’s Salar de Atacama is host to more than 15 percent of the world’s known lithium reserves. The South American country is the world’s second largest producer of the battery metal.

Last year, Rosatom joined forces with the Chilean Commission of Nuclear Energy to promote cooperation in the nuclear and lithium sectors in Chile. U1G, which is one of the world’s largest uranium producers, has assets around the world, including in Kazakhstan, the US and Tanzania.

Aside from the Atacama lithium project, Wealth Minerals has interests in Canada, Mexico, Peru and Chile, with its main focus being the acquisition and development of projects in South America.

The transaction is subject to customary closing conditions and approvals.