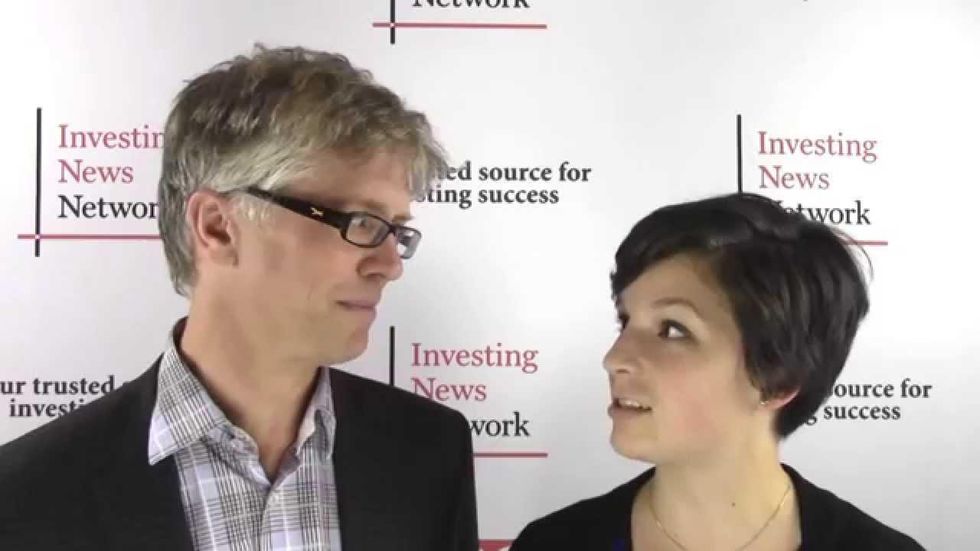 At the recent Canadian Investor Conference, the Investing News Network spoke with Dan Blondal, CEO of Nano One Materials, about his company’s innovative materials manufacturing technology. Although the technology could apply to a variety of different materials, Nano One has chosen to focus specifically on the cost-effective production of nanostructured cathode materials for lithium-ion batteries.

Although the technology could apply to a variety of different materials, Nano One has chosen to focus specifically on the cost-effective production of nanostructured cathode materials for lithium-ion batteries. “The battery space is something that everyone recognizes,” said Blondal, explaining the company’s choice. “Every investor out there knows that we need better batteries. There’s a big hockey stick of demand coming up, there’s a lot of pent-up demand for improvements to this space, and we think we can address that.”

Nano One has already started to receive third-party validation for its process, with testing by Canada’s National Research Council validating what Nano One has found in its own labs. The company also has materials test agreements with “some of the really big battery players out there.”

“We have started testing battery materials with them and we’ve got some very good results back … we’ve come now to the next stage where we’re starting to make improvements to the material to meet their specifications,” Blondal said.

The CEO also spoke about how Nano One’s process works, how he sees it bringing cost reductions for energy storage and how Nano One’s partner NORAM is progressing with the conceptual design of a commercial plant. Blondal anticipates that Nano One will have a pilot facility up and running by 2016, producing 10 to 20 kilograms of material per day. Watch the video above for more of what Blondal had to say.

INN: Nano One has a disruptive technology that’s looking at changing the way that many materials are processed but you decided to start with lithium-ion batteries, why did you choose that?

DB: Well, when we started the company in 2011, thelithium market was really high. Frankly, it was really easy to raise money. And I think it really comes down to the fact that the battery space is something that everyone recognizes. Every investor out there knows that we need better batteries.

What we’re trying to develop is a technology that’ll not only bring better batteries but bigger batteries to cellphones and the whole electric-vehicle space. So we expect to see – there’s a big hockey stick of demand coming up, there’s a lot of pent-up demand for improvements to this space, and we think we can address that.

INN: Great. So how exactly does the process work and how do you see it bringing cost improvements to energy storage?

DB: Well, that’s a great question. Essentially, what we’re developing is a technology that’s like a chemical assembly line. So we’ll take the raw materials – like carbonates, or hydroxides of lithium, cobalt, and nickel, and manganese – and we combine those into a structured product. We use a liquid-phase reactor vessel and we’ll take those materials and we’ll assemble them in the reactor then we dry them and then we run them through a furnace to basically complete the reaction. We get a ceramic powder at the end. And that ceramic powder is what stores energy with the mine battery. So that will then get processed at a battery plant where they will coat that unto an electrode, a piece of foil. And then that will become one side of the battery.

DB: Does that make sense?

DB: Well, let me give you a little sense of the history in where we’ve taken this. So, when we started in 2011, we were just an idea at that point. So we spent the first year-and-a-half building a lab, putting all the pieces in place, and then getting to the stage where we had a proof of concept. Proof of concept led us to the point where we were able to find patents. So we have 12 patents currently pending right now in North America and worldwide. And then following those patents, we were able to start to reach out to the third parties we speak of.

So one of the groups that we worked with is Canada’s National Research Council, NRC. And they did some battery testing for us and took our materials that build small test batteries then ran them to the battery cycling testers. And they basically validated what we’ve seen in the lab. So, we’re getting the same performance from them that we’ve received in our laboratory as well.

But we also have materials test agreements with a number of the really big battery players out there. And we’re under NDA with these guys so I can’t really specifically give any details but it’s the likes of Panasonic (TYO:6752) and Samsung (KRX:005930) and LG Chem (KRX:051910) and a number of their suppliers. So it’s all the big guys in the market who are supplying the consumer electronics and electrical vehicles.

So we’ve got material test agreements with those guys and we have started testing battery materials with them and we’ve got some very good results back, similar to what we saw at NRC. It’s pretty confirming with what we saw in the lab. And we’ve come now to the next stage where we’re starting to make improvements to the material to meet their specifications and we expect to be launching into more battery testing with these groups in the coming year.

INN: Yeah, very exciting. I also understand that a commercial facility is in the works, so I wanted to ask how work on that is progressing and how your relationship with NORAM and BC Research Council?

DB: That’s a good question. They’re very valuable partners for us. So we started a relationship with those folks back in the late summer, last year, so in 2014. And what that started out with is, there’s a facility first where we start to incubate the technology and build out a pilot facility. And in doing so, we’ve contacted NORAM to do a conceptual design of a full-scale commercial facility.

Now, we don’t expect to build that commercial facility anytime in the near future but that helps us understand where all the issues might be to actually scale up – and where some of the bottlenecks might be. And we expect that design to be complete in the next month, so mid-June. We should have some results back from that study. It’s been ongoing on for a few months. And that will then lead us to a pilot design, a much smaller version of a commercial pilot that’s now a commercial facility that will enable us to produce about 10 kilograms a day – 10 to 20 kilograms a day. And we expect to be designing that in detail in the fall and then bolting it to the ground in early 2016. By this time next year, we should have it up and running, and producing materials at about 10 to 20 kilograms today.

It’s all very exciting actually. That work we’re doing with NORAM and BCRI is really a big step in validating what we’re doing from a commercialization point. The big guys out there, they want to see someone de-risking the commercialization phase. They don’t want to get involved in that part of it. So, the partnership with BCRI and NORAM is quite going to go a long way improving. Yeah, it’s good.

INN: Okay and finally, one question that comes up a lot when you talk about lithium batteries is whether another technology will replace that in the near future – just at any point in the future. Is that something that you see happening, and how would your technology deal with that?

DB: That’s another good question. Lithium is at the top of the periodic table, which basically means it’s the lightest metal on earth. And it’s got very good energy potential. So, it’s likely to be the reigning material in portable electronics and electric vehicles for a long time because it just packs a lot of energy density into a small package. So it’s likely to be there for a while.

That’s not to say that there aren’t going to be other battery materials that come out there – whether it’s vanadium or iron phosphates, or other materials that become batteries. But they’re not necessarily going to be pervasive through the whole space. So they’ll have certain applications.

The upside of that – from outside the battery space is actually quite interesting. Because it’s a manufacturing technology, we can make any kind of material that doesn’t need to be a mixed metal aluminum oxide, for, let’s say, an aeronautical space application, or it could be a material for drug delivery system or it could be a material for coatings on metals or glassware or could even be materials for strengthening concrete.

So, we have many different applications for the technology itself. Our first focus is of course very narrow and it’s very focused on a specific material for the battery space.

INN: Okay, great. Thanks for joining me Dan.

DB: Thank you very much for having me Teresa. I really appreciate the opportunity to tell everyone about Nano One. Thank you.