Nickel has proven to be one hot commodity in the base metals space lately, but what led the metal to its current peak?

With the beginning of summer came skyrocketing nickel prices, which found themselves making major leaps and bounds in the sun.

The base metal’s price point managed to surpass most analysts’ expectations, raising interest about what was kindling the hot commodity. From proposed export bans to optimism surrounding things to come, there have been a handful of factors pushing nickel ahead in recent weeks.

But a question still remains — how long will nickel be on the up? Read ahead to find out what’s impacting the nickel price right now, how long experts think the heat will last and what to watch for going forward.

Once July started, prices began to creep upwards and surpassed the US$13,000 mark by July 11 at US$13,085. What investors and analysts alike may not have expected, however, was the subsequent leap nickel would make over the coming days. Within a week, the base metal’s price had gained US$1,500 to reach US$14,675 by July 18. 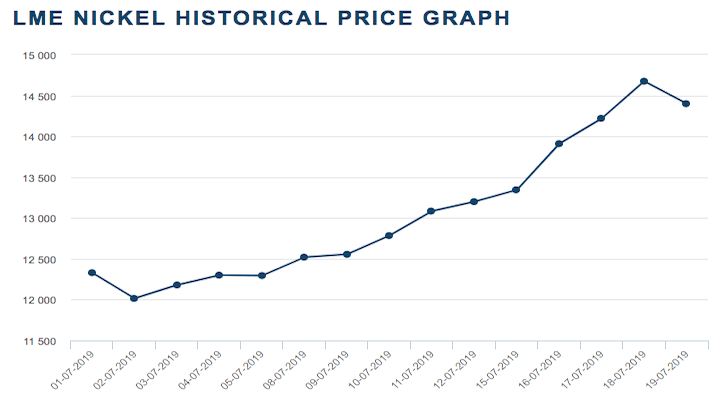 Though the commodity slightly cooled in the days that followed, it maintained its stance above the US$14,000 mark and has yet to slow down. Despite occasional ebbs and flows, nickel prices have gone on to reach highs of US$16,080, a level that was seen on August 16.

So what caused this summer surge? Experts have pointed to two major factors: optimism regarding nickel’s presence in the electric vehicle (EV) market, and speculation surrounding a potential ban on nickel ore exports out of Indonesia. Bear in mind, Indonesia is the world’s largest nickel producer.

Rumors began swirling in the space when reports surfaced that suggested the major nation could bring forward a nickel ore export ban originally docketed for 2022. Officials are allegedly looking to push the ban ahead to 2020. The ban is intended to force miners into processing their ore in Indonesia.

The news, which broke around August 7, sent nickel prices skyrocketing from US$14,735 on the London Metal Exchange to US$15,490 in a single day of trading. This marked the commodity’s biggest one day climb in London since 2009.

Despite the spook that saw prices go flying, some experts aren’t convinced that nickel has the necessities required to maintain its momentum.

“As such, assuming an earlier-than-expected Indonesian export ban doesn’t materialize, we think that current fundamentals will eventually come back into focus and send the price of nickel lower as investor exuberance fades.”

However, Clancy went on to admit that, if Indonesia’s export ban does end up being pushed ahead, prices could be “sent even higher” in the immediate aftermath.

“Analysts expect nickel prices to ease towards the end of the year, as the speculator-led rally fades. In addition, reignited trade tension between the US and China are expected to erode the outlook, as will concerns of a global economic slowdown,” the report reads.

Though nickel’s current spike may be short lived, that’s not to say investors should snub the commodity’s long-term potential. As mentioned, prices have also gained due to the growing EV market, which, as FocusEconomics acknowledges, sets a good precedent for the metal’s future forecast.

“Over the longer-term, higher EV-battery output bodes well for demand and should help lift prices through the forecast horizon.”

In the driver’s seat

The growth of the EV market has painted a heightened demand picture for several metals involved in the production and operation of EVs, including nickel, copper, cobalt and others. As such, there has been a surge in companies trying to help contribute to the growing battery market by adding nickel assets to their lineup or furthering investments in presently owned projects.

A recent example of this has been major miner BHP (ASX:BHP,NYSE:BHP,LSE:BLT) with its plans to expand its colossal Nickel West division in Australia. While announcing its game plan, the company noted that the growing EV market is expected to impact nickel demand by the mid-to-late 2020s.

“Many companies are investing in operations to produce high-purity nickel specifically for the EV battery market,” Clancy wrote in a note. “Examples include BHP’s announcement that it will ramp up its 22,000 tonnes (per) year Nickel West unit in Australia by Q2 2020 and Tsingshan’s plans to begin production of 50,000 tonnes (per) year of battery grade nickel at its IMIP operation in Indonesia by end-2019.

“The big picture is that the trend of major producers investing in high-quality nickel operations looks set to continue for the time being.”

While it’s to be expected that the big dogs will want to capitalize on a growing market, there are also a handful of smaller companies jumping on board. One example is Mincor Resources (ASX:MCR,OTC Pink:MCRZF), which has been working on its “nickel restart operation” in Western Australia’s Kambalda district. The move comes after its assets were put on care and maintenance in 2016 when pricing for the commodity crashed.

Others include Horizonte Minerals (TSX:HZM,LSE:HZM), which recently announced a mineral resource estimate for its Serra do Tapa nickel deposit in Brazil. The company highlighted its intentions to help supply the battery market with nickel and cobalt from its assets in the area, which hold a cumulative mineral resource of 280 million tonnes.

With China being the world’s largest producer of stainless steel, the major nation’s economy can create an ebb and flow effect for the nickel market. The first half of 2019 cast a shadow of doubt over nickel as supply was plentiful and ongoing trade war issues with the US left global growth in an uncertain position.

“Nickel prices slumped recently on narrowing supply deficits and weaker growth prospects in China amid the intensifying trade spat with the US, which has knocked demand. This came as a surprise to many analysts who had expected prices to trend higher through the first half of the year,” FocusEconomics Lead Economist Ricard Torné previously told INN.

However, the start of 2019’s second half saw a boost from Chinese demand, which helped push nickel prices forward.

As such, despite the optimism swirling around nickel’s place in the EV space, it’s important for investors to keep their eye on Chinese activity when exploring the base metal.