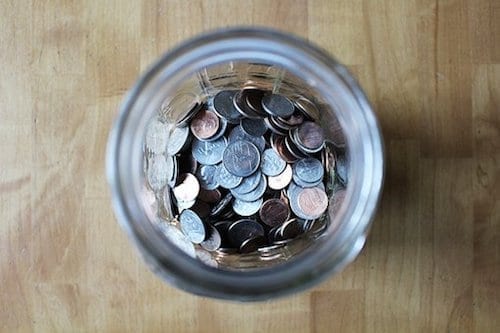 Here’s an overview of the main factors that impacted the nickel market in H1 2019, and what’s ahead for the rest of the year.

Nickel wasted no time in Q1 2019, making leaps and bounds out of the gate.

But despite the impressive strength it found in the year’s first few months, prices for the base metal would later ease off on the heels of various factors, including rocky China-US relations.

With the second half of the year now in swing, the Investing News Network (INN) caught up with analysts, economists and experts alike to find out what’s ahead for nickel supply, demand and pricing.

As mentioned, nickel took off right out the gate at the beginning of the new year. The base metal started 2019 at US$10,435 per tonne on the London Metal Exchange (LME) and managed to climb past the US$11,000 mark within just a week. By the end of January, nickel prices had already passed US$12,000. 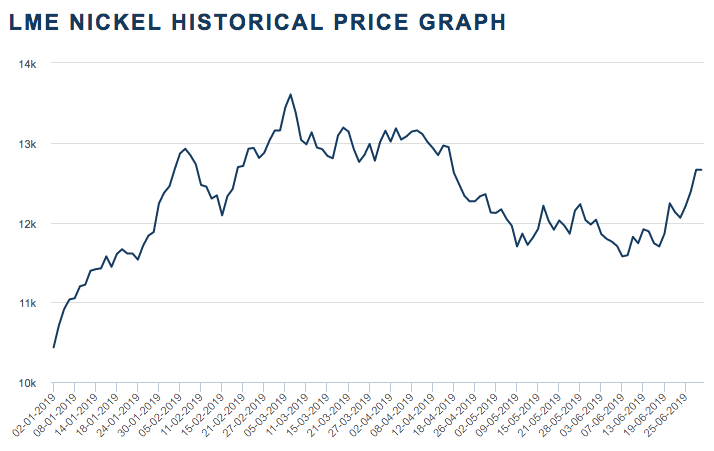 Chart via the LME.

While Q1 saw some temporary downfalls in pricing, the commodity managed to trend almost entirely upwards through the quarter. It peaked at US$13,605 in March, its highest point so far this year.

Q2 told a different story for the base metal, however, as it began to slide downwards by mid-April. The commodity experienced its lowest point of the quarter in early June when it hit US$11,575, though it managed to rally back up to US$12,660 by the end of the month.

According to FocusEconomics Lead Economist Ricard Torné, the bullish sentiment towards nickel found in Q1 ebbed through Q2 on the back of oversupply and reignited trade war concerns.

“Nickel prices slumped recently on narrowing supply deficits and weaker growth prospects in China amid the intensifying trade spat with the US, which has knocked demand,” he said. “This came as a surprise to many analysts who had expected prices to trend higher through the first half of the year.”

Chiming in on the topic of a reduced supply deficit was Sean Mulshaw, principal analyst of global nickel markets at Wood Mackenzie. Mulshaw explained that one of the biggest trends nickel has seen over the last six months has been the growth of nickel pig iron (NPI) supply, mostly in Indonesia but also in China.

“Expansion in NPI supply … has reduced the market deficits. At the same time, there is a risk to demand, mainly in China, where high stainless stocks and strong stainless production is leading to stainless oversupply and talk of cuts. Both are risks on the downside.”

Indonesia has been steadily ramping up its status as a nickel producer, with reports surfacing earlier this year that the base metal may eventually overshadow palm oil as the country’s second largest export.

Though stainless steel is still a dominant product of the nickel market, accounting for approximately 70 percent of its usage, the base metal is also crucial to most lithium-ion batteries and, in turn, the ever blossoming electric vehicle (EV) market.

With China being the world’s largest producer of stainless steel and a major player in the EV scene, one might think Indonesia’s combination of nickel supply growth and geographic proximity makes for a winning match up. However, Mulshaw noted that the issue of oversupply is a prominent one and that it was a partial culprit in nickel’s lowered Q2 price point.

“By Q2 though, things were turning more bearish, talk focused more on the expansion in NPI and the stainless oversupply in China, while resolution to the US-China trade dispute became more distant again. Ultimately, the uncertainty surrounding these issues has enhanced caution, so prices went lower and there seems to be little fundamental justification for them to rally again soon.”

In light of the aforementioned blooming EV market, other mining companies have made moves throughout H1 2019 to add more nickel to their rosters. One major example has been Mincor Resources (ASX:MCR,OTC Pink:MCRZF), which has been working to build its “nickel restart strategy” in Western Australia’s Kambalda district.

The company placed its nickel operations on care and maintenance in 2016 after prices took a nasty two year tumble. Since then, it has joined other Australian companies looking to take advantage of the country’s proximity to China by getting back in the game with offtake term sheets and asset acquisitions.

While oversupply concerns are alive and well among many analysts, others acknowledge that demand for the commodity is still present in its expected areas.

Speaking about the biggest trends that have affected nickel over the last six months was Colin Hamilton, managing director of commodities research at BMO Capital Markets.

“The biggest factor for nickel, as you’ve seen, is the return or the growth of Chinese NPI output, which has been stagnant for the past couple of years, but we really have seen a strong uplift there, maybe up as much as 10 percent year-on-year,” Hamilton told INN.

“The other thing I would say is the EV hype. I mean, for the longer-term trend, EVs are still there. For the battery raw materials, a lot of the hype has disappeared from the market at the present time. For nickel stainless steel demand, it still remains relatively strong.”

A hot button issue in the nickel space last year was that of a supply deficit — as the EV market continued to make traction, demand grew while the mining space was often criticized for not doing enough to keep up on the supply side.

However, at the end of last year, Japan’s largest nickel smelter, Sumitomo Metal Mining (OTC Pink:SMMYY,TSE:5713), told the media that it anticipated 2018’s global nickel deficit to drop significantly through 2019.

On the back of heightened output from global suppliers and lower-grade NPI in Indonesia, the company predicted last year’s 93,000 tonne deficit would shrink to 49,000 tonnes this year.

A commodity forecast report from FocusEconomics for July touches on the gradually closing supply deficit in the nickel market, but notes that EVs should still help keep demand afloat.

“Analysts expect nickel prices to rise in the near-term amid backstopped Chinese demand and tapering supply deficits,” the report reads. “Moreover, concerns of a global economic cool-off persist. Over the longer-term, higher EV-battery output bodes well for demand and should help lift prices through the forecast horizon.”

Going forward, experts agreed that there are a handful of key components to watch for in the nickel market. As is to be expected, the up and down relationship between China and the US is one of the major players.

“Although prices are expected to remain under strain as supply deficits disappear, recent events suggest that demand could stoke price pressures; short-term growth forecasts for China have begun to stabilize and, notably, calmer heads appear to be prevailing in US-China trade talks,” Torné told INN.

Looping back to the focus on Indonesia, both Hamilton and Mulshaw noted that high-pressure acid leaching — used for the recovery of nickel from nickel laterite ores — will be worth watching as it could potentially add to global supply.

In terms of pricing for the base metal, analysts polled for the aforementioned FocusEconomics report had a median nickel price estimate of US$12,429 in Q3 and US$12,551 in Q4.

The most bullish sentiment towards Q3 nickel came from Standard Chartered (LSE:STAN,OTC Pink:SCBFF), which is calling for a price point of US$13,075. The most bearish response was from BMO Capital Markets (NYSE:BMO), which predicts that pricing will be closer to US$11,500.