The copper price has started to bounce back from its drastic fall at the start of the year, climbing more than 6 percent over the past month. However, Morgan Stanley has cut its 2015 price forecast for the metal by roughly 16 percent, to $5,945 per tonne, on the back of lackluster demand from China. 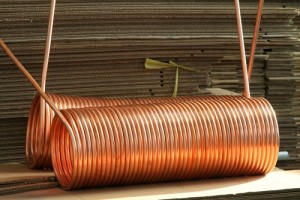 The copper price has started to bounce back from its drastic fall at the start of the year, climbing more than 6 percent over the past month. However, Morgan Stanley (NYSE:MS) has cut its 2015 price forecast for the metal by roughly 16 percent, to $5,945 per tonne, on the back of lackluster demand from China.

The firm remains convinced that base metals will outperform bulk commodities such as coal, but in a report it expresses concern that seasonal demand from China has failed to pick up as expected. In the report, analysts Tom Price and Joel Crane state that far from expanding trade in response to “a growing list of government approved property and infrastructure projects,” the metals processing industry in China “remains dormant” and is “actually sidelining capacity.”

“With only months left before the mid-year peak in sales of commodity-intensive goods, time is running out for China to support commodity prices in 2015,” the note reads. Certainly, Morgan Stanley isn’t alone in making that observation — the Financial Times pointed to an absence of increased demand earlier this month, and also noted that imports fell to their lowest since 2011 for February.

Still, Morgan Stanley also notes that the red metal is slowly recovering after recording the biggest fall of all the base metals during the last quarter of 2014. It chalks up copper’s fall to a reaction to collapsing crude oil prices, and also to “aggressive China-based hedge fund selling.”

“Once the oil price discovered a floor in late-Jan, copper’s largely unchanged tight mining fundamentals supported a price rally,” the firm states. Furthermore, it notes that while global exchange inventories have risen about 11 percent over the past three months, there are indications that “copper’s short-term fundamentals have actually improved a little.”

That said, the firm stresses in the note that the market will have to wait and see what happens in terms of Chinese demand when it comes to predicting an outcome for the copper price. So far, the meter could move either way.

Bloomberg notes that China’s Purchasing Managers’ Index fell to an 11-month low of 49.2 for March, indicating a contraction in manufacturing activity, while Morgan Stanley states that key power grid investment data came in at a two-year low for the first two months of the year. That said, Morgan Stanley points out that China’s state grid chairman recently announced that investment may by increased by 21 percent year-over-year, upping expectations for increased spending.

Taking a look at the supply side of things, Morgan Stanley believes that it will “expect ongoing supply disappointments, simply because it is a feature of the industry.” For instance, Indonesian exports remain at risk politically — especially in the wake of Freeport-McMoRan’s (NYSE:FCX) production halt at Grasberg — and Rio Tinto (NYSE:RIO) has cut Kennecott’s supply outlook. Still, the firm is also watching other projects that could drive mine supply growth, such as MMG’s (HKEX:1208) Las Bambas and Chinalco’s Toromocho, both in Peru, and First Quantum Minerals’ (TSX:FM) Sentinel mine development in Zambia.

All in all, copper investors have plenty to keep an eye on going forward when it comes to tracking drivers for the red metal’s price. At close of day on Tuesday, spot copper was up just barely by 0.14 percent, trading at $2.79 per pound.

A Brief Overview of the Copper Price Today