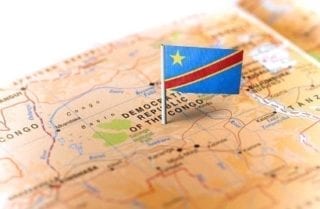 A power supply deal with a South African utility could increase the DRC’s copper output by as much as 20 percent.

The Democratic Republic of Congo (DRC), Africa’s top copper-producing country, has had massive power shortfalls in recent years, and its copper production has suffered as a result.
But a turnaround may be on the horizon. A provisional power supply deal with South Africa, announced earlier this week, could increase the country’s annual copper output by as much as 200,000 MT — that would amount to a 20-percent rise.
According to Ben Munanga, chairman of the energy commission at the Chamber of the Mines of the DRC, Congolese state-owned power company SNEL proposed importing 200 MW from South African utility Eskom at meetings in Johannesburg on April 20 and April 21.
“We still have a few years to go before we have new hydropower capacity on our network so if we have such an opportunity to buy we are going to take it,” SNEL spokesman Medard Kitakani told Bloomberg. He added that Eskom proposed the deal and said that it was unexpected.
DRC copper companies are in desperate need of power. SNEL estimates that demand from copper miners outstrips supply by 750 MW. The country’s Katanga region, where the metal is mined, receives only about half the power it needs from the national grid. Those shortfalls have been one of the biggest constraints on output growth in the past three years.
Some miners have dealt with the lack of power by using expensive generators or importing power on their own. For example, Glencore’s (LSE:GLEN) Mutanda Mining and China Minmetals’ MMG (HKEX:1208) have installed diesel generators to top up power supply for copper production.


Give me my free report!
But as mentioned, these generators do not come cheap. According to the Chamber of Mines of the DRC, they can increase costs by as much as $1,000 per MT. “If you compare the cost of imported power to the cost of [other alternatives] it’s a no-brainer,” Munanga said.
That said, analysts remain cautious about the agreement. SNEL’s deal with Eskom has yet to close, and once it does SNEL will have to then make power supply deals with mining companies. That could take longer than expected, and some have pointed out that the state-owned company has failed to deliver on previous power contracts.
What’s more, a 20-percent increase in copper output from the DRC wouldn’t necessarily be achievable — or desirable. Karen Norton, senior base metals analyst at Thomson Reuters GFMS, said via email, “while this would clearly be positive for DRC’s copper mining industry, we would question the capacity for a 20-percent boost to production this year. Perhaps it would be achievable over a longer timeframe.”
She also explained that if DRC’s supply were to increase by this amount over the course of this year, copper prices would likely respond negatively as “a modest surplus turns into a considerably larger one.”
On Thursday (April 27), three-month copper on the LME closed down 0.4 percent at $5,692 a tonne. Earlier this month it hit a three-month low of $5,569.
Don’t forget to follow us @INN_Resource for real-time news updates.
Securities Disclosure: I, Priscila Barrera, hold no direct investment interest in any company mentioned in this article.