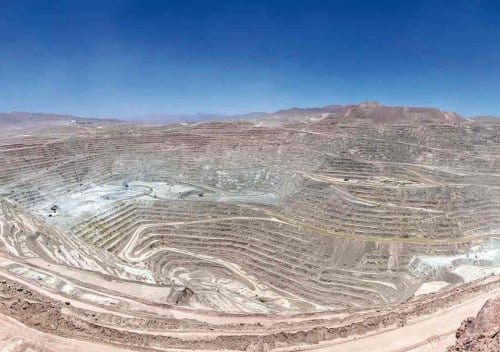 BHP plans to switch both the Escondida and Spence projects to renewable energy by the mid-2020s to decrease operational costs.

BHP (ASX:BHP,NYSE:BHP,LSE:BLT), one of the largest resource companies in the world, announced on Monday (October 21) that it is targeting 100 percent renewable energy at its Escondida and Spence copper projects and is looking to become water secure.

The company expects the two major projects to achieve its target sometime in the mid-2020s, promising value to both the environment and shareholders.

“These new renewable energy contracts will increase flexibility for our power portfolio and will ensure security of supply for our operations, while also reducing costs and displacing CO2 emissions,” said Daniel Malchuk, president of BHP Minerals Americas, in a press release.

BHP projects a 20 percent reduction in energy prices at both the Escondida and Spence operations. According to the company’s press release, this move follows the precedent set at the Kelar power plant about 10 years ago when it switched from coal to gas, lowering emissions.

The mining giant also announced it will be implementing more desalination water plants at other projects, such as the Spence project. The Escondida project has had two desalination plants since 2017, and BHP plans on upgrading the first plant in coming years.

“In addition to our new desalination plant at Spence, we have also invested over US$4 billion in Escondida’s desalination facilities to further our progress to eliminate groundwater usage in Chile by 2030,” added Malchuk.

Attempts at going green have not always gone well for miners. Less than a week ago, Chile’s Codelco announced it will be ditching its “green copper” push, citing the project’s long-term unsustainability.

In 2017, Codelco outlined a plan to introduce green copper, which would be sourced via sustainable practices and marketed at a higher price due to its increased value as a sustainably sourced metal.

Coldeco ultimately decided to move away from this project since it could not guarantee its copper’s sustainability once it left the mine for processing and therefore could not justify the higher prices.

Instead, the state-owned miner is moving toward making its overall product more sustainable. This upcoming venture may be successful, but scrapping the green copper project still comes at a time of uncertainty, with the US-China trade war affecting markets and protesters challenging the Chilean government.

The project also comes in the wake of the Chile’s ever-growing political crisis, with the Escondida mine experiencing a work stoppage set to begin either late Monday (October 21) or early Tuesday (October 22). This move comes as an act of solidarity between miners and those protesting in the country.

The push for greener copper and forecasts for both companies’ projects line up with the expected increase in demand for electric vehicles (EVs). The surge in popularity for EVs comes at the heels of growing concern over climate change, as consumers move toward more eco-friendly transportation.

Copper closed on Friday at US$5,750 per tonne and opened on Monday at the same price.