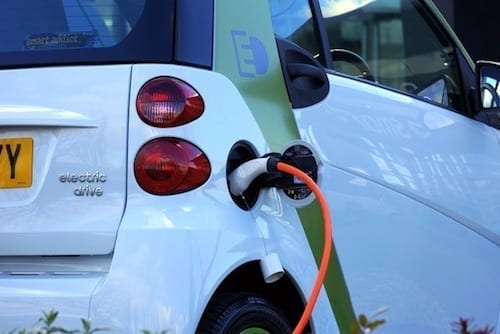 According to Wood Mackenzie, copper consumption is set to rise over 250 percent as electric vehicle charging points become more common.

A new report from Wood Mackenzie estimates that copper consumption is set to rise over 250 percent by 2030 with the implementation of 20 million electric vehicle (EV) charging points.

As the EV movement heats up, production of the commodities needed for their batteries and other components is also on the rise. This includes copper and metals like nickel and cobalt; as such, companies involved with the metals are getting their ducks in a row before demand goes off the charts.

According to Henry Salisbury, a research analyst at Wood Mackenzie, copper is set to be the “cornerstone” of the EV revolution.

“At the heart of the electric vehicle, (copper) is used throughout because of its high electrical conductivity, durability and malleability. The need for copper is even more significant when it comes to charging stations and supporting electrical grid infrastructure,” Salisbury states in the report.

With the expectation that the EV revolution will continue to grow in the years to come, WoodMac predicts that the need for copper will climb along with it.

“By 2040, we predict that passenger EVs will consume more than 3.7Mt (million tonnes) of copper every year. In comparison, passenger internal combustion engine (ICE) vehicles will need just over 1 Mt,” Salisbury added.

“If we look at cumulative demand, between now and 2040 passenger EVs will consume 35.4Mt of copper — around 5 Mt more than is required to meet current passenger ICE demand.”

Also highlighted in the report is the uniqueness of copper and how there are no “viable alternatives” to the base metal. According to WoodMac, copper’s physical properties make it the best for conducting electricity and also give it the ability to withstand the high temperatures often seen in EVs.

While aluminum is considered the next best thing — and has pros of being lighter and significantly cheaper — copper’s size capabilities and efficiency keep it in the number one spot.

“An aluminum cable needs to have a cross-sectional area that is double the size of any copper equivalent to conduct the same amount of electricity,” the report explains.

So what’s the issue with copper’s supremacy in the EV market? Experts in the space have been predicting an eventual copper deficit for some time now, which places the EV revolution in a precarious position.

CRU Group Principal Analyst Robert Edwards previously told the Investing News Network (INN) that a supply shortage is on the way, but that the question remains of when it will happen and to what degree.

“That’s a medium-term story that’s obviously been around for a number of years now. And I think it’s certainly true that, if you’re looking … at least five years ahead, there is, as we stand today, a shortage of copper coming,” he said.

“Certainly by the mid-2020s, and even slightly before, you’re starting to see some sizeable deficits in the market. I think what I caution against is the fact that, if we go back a year or 18 months, we were forecasting much steeper deficits emerging sooner.”

Issues at major copper mines and countries this year have further stoked negative sentiment surrounding supply of the red metal. Salisbury told INN in July that WoodMac had recorded more mine disruptions this year than in 2018 as a whole. This includes a strike at Codelco’s Chuquicamata mine, floods in Chile and unplanned cuts in Africa and Europe.

“There are lots of other, smaller projects that have got the go ahead, and so that’s closed the gap in supply that might have otherwise emerged in, say 2020 to 2021. So I think … there is an emerging deficit coming in the market, but it’s whether we ever really get to that stage, because obviously potentially more projects could get approved and that would then move that deficit further out.”

As of Monday (August 12), copper was trading at US$5,724 per tonne on the London Metal Exchange.

Zinc Price Update: H1 2020 in Review
ERG: Copper Prices Could Reach US$7,000 Next Year
Australia’s Lithium Producers Could Benefit from Vertical Integration
Best Copper Stocks of 2020 on the TSX