What’s the lowest silver price possible? Experts weigh in on the minimum price for the white metal given its varied uses.

The silver price has displayed volatility for much of 2020 on the back of the COVID-19 pandemic.

Market uncertainty has broadly benefited the precious metal, and as of mid-year it had added more than 50 percent to its value since January. Along with that turmoil, increased interest in physical silver and exchange-traded funds has pushed the white metal to prices unseen since 2007.

Silver is now around US$30 per ounce, and for investors looking for an edge it’s becoming increasingly important to understand how the price moved this high — and where it could go in a reversal.

With that in mind, the Investing News Network spoke with experts to gauge the intrinsic value of silver, and how low its price could go before it is uneconomical to produce. Read on to learn what they said.

Although economic uncertainty was a driver behind that price rise, the proliferation of solar panels and photovoltaics (PV) in the early 2000s also contributed to the white metal’s ascent.

The technology used in solar panels has been around since the 1970s, but the growth exhibited in the 2000s was propelled by government incentives, Philip Newman, director of Metals Focus pointed out.

“It was because of the environmental legislation that suddenly favored green technologies. And really, PV became suddenly commercially viable,” he said.

Today, the PV manufacturing space consumes 100 million ounces of silver annually and is a key end use for the metal — even though silver’s value as a currency and industrial metal have been long established, growth in other end use segments upholds the metal’s intrinsic value and helps prevent a lower price.

Newman also noted that prior to this year’s upheaval, many countries planned to integrate new solar capacity through fresh installations. While these projects have been delayed, they are not canceled.

Individuals’ desire to install solar power is also a driver, according to silver analyst David Morgan.

“There’s a move out of the cities and into the country in the US and other places — to become more independent, or more self-sufficient,” he explained. “And a fair percentage of those people don’t want to be necessarily off the grid, but they’re looking at putting solar into the construction, or adding solar to the existing construction.”

The implementation of 5G technology is another end use that will push silver demand higher. Just how much metal it will consume is hard to gauge, but Morgan gave a rough estimate.

“5G is going to take, in theory, 80 million ounces of silver,” he said. “Now, that’s not totally true, because not everyone is going to get a 5G phone. Some of the silver that’s in phones will be recycled. But it is an increased demand.”

The sale of 5G-enabled devices is just one of the ways the technology could cause an uptick in silver consumption. Referred to as the evolution of communication, 5G is poised to usher in an era of seamless connectivity — one that Newman believes will lead to the introduction of more devices and applications.

“By that I mean the opportunity for others to develop applications, which can now work given that much greater bandwidth for transporting information,” he said. “But in terms of the consumer devices, whatever it may be, you do have quite a positive outcome (in terms of silver price) there as well.”

Moving away from demand, the amount of silver available also contributes to price action. Total annual output is projected to increase year-on-year by 11 percent in 2021 — that translates to 68 million ounces. 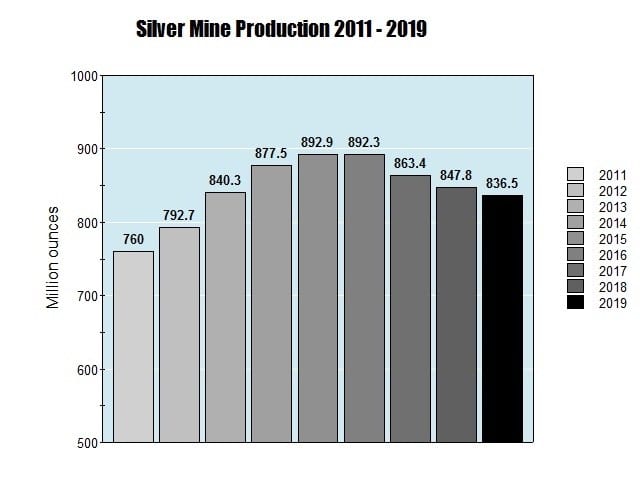 Silver mine production tallies from 2011 to 2019 via the Silver Institute.

Metals Focus anticipates annual output will top 912 million ounces in 2023, a record-setting level. But Adam Webb, the firm’s director of mine supply, was reluctant to use the term “peak silver” because there is potential to see new projects come online, especially in a higher price environment.

Morgan agreed that it is premature to say peak silver has been reached. “I’m aware of probably two or three projects that are in the billion ounce category,” he said. “So I don’t think we’ve hit the peak production yet … I’m aware of a few mega deposits that will add significantly for a few years.”

Morgan expects to see M&A activity increase in the space over the next few years as well.

“Absolutely. The big boys will need to capture deposits, there aren’t that many,” said Morgan. “You know, silver is very rare, so you’ll see M&A or joint ventures.”

In 2019, world silver demand grew slightly, coming in at 991.8 million ounces. Mine supply sat at 836.5 million ounces, evidencing a growing discrepancy that could provide price support.

The recycling sector is also a secondary silver source. In 2019, this stream accounted for 169 million ounces, but it is unlikely that that the recycling space can keep pace with demand for the white metal.

Looking further at supply of the white metal, another key aspect in understanding how low the silver price could go is the cost of production.

Importantly, the cost to produce silver varies depending on the company and project. That’s because the majority of silver output comes as a by-product of other mining operations. In fact, only 30 percent of total annual output comes from primary silver producers.

“So 71 percent, to be precise, in 2019 came as a by-product metal from copper, lead, zinc and gold mines, primarily,” explained Webb. “Those operations that are producing silver as a by-product, the economics of those operations mean that even if the silver price drops, they’ll still produce it because their profitability is based on the primary commodity they’re producing.”

Secondary silver producers are motivated by the price of their primary commodity, Webb noted. Volatility in the silver market is not a motivator behind their silver output.

For the 30 percent of primary silver miners, the price of the white metal dictates whether they turn a profit or need to enter care maintenance. Of course, the cost of transportation, labor, corporate overhead and other project-related expenses are also factors miners must take into consideration.

In Q1 2020, the “90th percentile was around US$19,” added the director of mine supply. He also noted, “At current prices, nothing’s going to close, the price would need to come down below probably around US$19 per ounce for production to come offline.”

Broadly, Morgan believes silver would need to fall below the mid- to high-teens before mines would close. “Somewhere in the ballpark between US$15 and US$17 is the bare minimum,” he said.