Silver may seem abundant now, but there are warnings that days of scarcity lie ahead. One reason? The rising consumption of energy used to extract the metal. 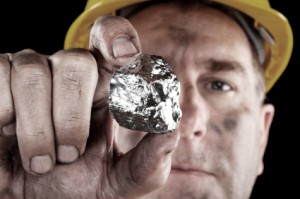 Many silver mining companies are announcing rising silver production. Combined with reports of a silver surplus in 2011 and forecasts for another surplus this year, the possibility that silver may go into deficit has been obscured. As a result, predictions that the future of silver mining may be in jeopardy are flying below the radar of most silver investors.

In August 2010, Scientific American published an article with a map of resources plotted against time. Silver’s time as an exploitable resource is slated to end in 2029.

“At current production levels, about 19 years’ worth of silver remains in the ground,” the article states.

The relevance of this date was reiterated earlier this year when the BBC quoted Mansoor Barati, an associate professor at the University of Toronto, as saying that global reserves of silver are diminishing rapidly and could run out as soon as 2029. “That is, if we consume silver at the rate we are today and no new deposits are found,” he added.

However, Barati, who leads his university’s Sustainable Materials Processing Research Group, also said that new deposits are likely to be found and that rising silver prices will make exploration more cost-effective.

“Silver will last longer, but not beyond this century,” Barati told Silver Investing News in an interview.

Steve St. Angelo, an independent researcher, notes in an article published by The Market Oracle that the supply of silver has already increased significantly over the past few years. He points to data from the US Geological Survey (USGS), which in 2009 reported that the world contains only 270,000 metric tonnes of silver. In 2012, the USGS reported 530,000 metric tonnes.

“The world now has more than 22 years worth of silver reserves remaining,” he states.

Barati explained that reserves represent the part of deposits that can be economically exploited with today’s silver price and technologies.

“If we find cheaper ways to mine silver, the prices go up or new deposits are discovered, that 500,000 [his rough estimate without looking at the USGS data] tonnes increases. All of these scenarios are likely,” he said.

Though that increase in reserves and the likelihood of further increases may seem to tread upon the bullish prospects of silver depletion (in the form of higher prices), there are more factors to be considered.

Barati said the population is increasing, and all data points to increasing consumption. He pointed out that silver is strategic in many applications, such as jewelry, electronics, photography and photovoltaic applications.

Furthermore, St. Angelo’s research is a reminder that the existence of silver does not guarantee that metal will be extracted. He warns that energy complications also pose risks for the future of silver production.

Many miners of silver and other metals are dealing with declining grades, which means more energy is being consumed to produce smaller amounts of metal.

Rising energy costs in the mining industry are very much in focus, but generally affordability is the main issue. However, though it is discussed less often, the availability of energy poses a real risk for those in the mining business, according to St. Angelo’s research.

Chile is one of the countries contributing to the increase in USGS silver reserves, and silver is a by-product of copper production. While researching, St. Angelo found that from 2005 to 2010, Chile’s copper production was virtually flat, yet miners’ consumption of diesel and fuel oil increased by 50 percent.

Such energy consumption rates should be a major concern within the mining industry as crude is a finite resource.

“The world is currently experiencing a plateau in global oil production and will soon be heading down the slope of continued depletion,” explains St. Angelo.

When using a model that incorporates technological advances — that allow companies to tap into harder-to-reach places — global oil production is set to peak in 2014, according to Scientific American. “By the 2050s we will have pulled all but 10 percent of the world’s oil from the ground,” the magazine asserts.

Competition for access is expected to intensify, and it is anticipated that exporting nations will continually increase domestic consumption, reducing the supply available for export.

But declining net energy will crush global growth, he warns.

“As the global GDP declines, so will the supply of base metals such as copper, lead and zinc,” St. Angelo comments. “There are … some very large open-pit mining projects supplying silver that are [forecast] to go into production within the next several years as well as others by the end of the decade. It is astounding to see these 25-45 year extended forecasts by the mining companies without any consideration of what the energy environment will be like in 2015-2020 or later,” he explains in another article.

Says Barati, the U of T associate professor:  “One thing is obvious: the mineral resources are finite, and they will run out unless we rely on new technologies using renewable materials or recycle so much that there is no need to extract from the ground. Both scenarios are unlikely at present.”