Mexico is best known for silver mining, but it’s also a major gold producer. Here’s what you need to know about gold mining in Mexico.

Gold mining in Mexico has taken place for at least 500 years, and the country has a history of both commercial and artisanal production. Today, gold and silver account for more than 50 percent of the country’s total metals output.

Over the last decade, gold production in Mexico has stayed relatively stable. However, due to the uncertain gold price environment, very few new mines have opened in the past few years. While gold is beginning to see a turnaround, most mining companies operating in Mexico have been focusing on reducing costs and improving capital management.

Will that change in the future? We’ve put together a brief overview of what the future may hold for gold mining in Mexico. Read on to learn more.

Mexico has been a top gold-producing country for many years, and in 2018 its gold output for the year fell slightly to come in at 118.4 metric tons.

The decline was largely due to junior miners having difficulty accessing financing, the one month blockade of Newmont Goldcorp’s (TSX:NGT,NYSE:NEM) Peñasquito gold mine and the ongoing obstruction to MAG Silver’s (TSX:MAG,NYSEAMERICAN:MAG) project in Chihuahua. Penasquito is Mexico’s top gold mine, and now harder and lower-grade ore types are being mined there. 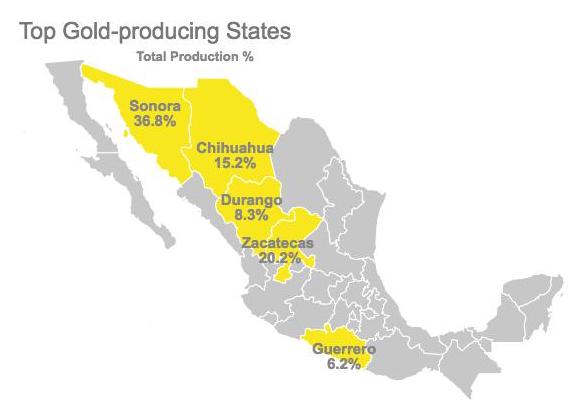 Last year, foreign and local companies invested approximately US$383 million in mining exploration in Mexico, down 37.4 percent from the US$612 million placed into the industry in 2017.

Increased scrutiny from President Andres Manuel López Obrador (AMLO) on miners’ environmental practices and treatment of indigenous people could cause these statistics to remain stagnant over the next few years. 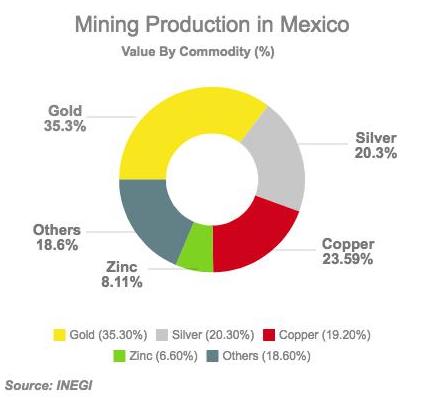 In total, there are approximately 1,158 mines in operation in Mexico, and many are considered world-class deposits. Even so, there are still opportunities for new mining companies to gain traction in the country — only 25 percent of Mexico has been explored in detail.

The problem is that currently relatively little exploration is taking place — in 2017, spending on exploration and development declined for the fourth year in a row to reach a 10 year low of US$483 million, and little has changed since. A report from Camimex (Spanish) says that this downtrend could impact the country’s metals production in the near future.

Although gold production in Mexico has been on the decline in recent years, the region remains an attractive investment opportunity for private business and many foreign investors. Due to the fact that natural wealth can be found throughout the entirety of Mexico, many miners, both large scale and juniors, continue to explore its mines.

In fact, experts have noted that approximately 70 percent of Mexico contains impressive geological potential for mining, making Mexico the world’s fourth largest foreign direct investment (FDI) destination for mining and the first destination for FDI in all of Latin America.

Toward the end of last year, Mexico was poised to reach a four year high in FDI in mining, and according to Global Affairs Canada, roughly 70 percent of the foreign-owned mining companies that currently operate in Mexico are based in Canada.

However, despite the boost that Mexico receives from foreign gold producers, there has been recent scrutiny of their activities within the region. In March of this year, AMLO announced that he will be carefully watching foreign companies when it comes to their environmental practices and treatment of indigenous people.

In order to do this, the president will strengthen the rule of law in Mexico, Juan Jose Gomez Camacho, ambassador of Mexico said, and “(will increase) the role of the state in making sure that the standards of operation in Mexico from foreign companies in this (mining) or any other sector are sustainable. … But it’s also a self-discipline, it’s a question of companies’ values on how they operate.”

This is not to say that gold producers cannot continue to explore and mine in the region, but elevated standards may continue to keep production of the yellow metal down.

Gold mining in Mexico: What the future holds

Despite the potential that Mexico has to offer, it is also well known that the region has been plagued with violence and illegal gold mining. This is one of the reasons that exploration has not exploded in the North American country.

However, many with a pulse on this jurisdiction have speculated that AMLO’s proposed changes, and new standards on mining the yellow metal, may be what Mexico needs to help the country and the industry move past its history of violence.

In addition to increasing security within the mining industry, AMLO will also waive a proposed tax increase for foreign miners in the region. With only about 25 percent of Mexico being explored for gold, these changes could be a catalyst for more exploration and gold production in the country.

What the future may hold for gold mining in Mexico remains to be seen, but for now the country continues to be a top producer of gold, as well as many other commodities, including silver, zinc, manganese, graphite, lead and copper.

While there are certain mining roadblocks, Mexico remains flush with natural wealth and untapped precious metals. While exploration has been down in the last few years, it does not exempt the fact that it is a prime location for commercial production. As market participant, now may be the perfect time to invest in a company with assets in Mexico.

2 responses to “What’s the Future for Gold Mining in Mexico?”