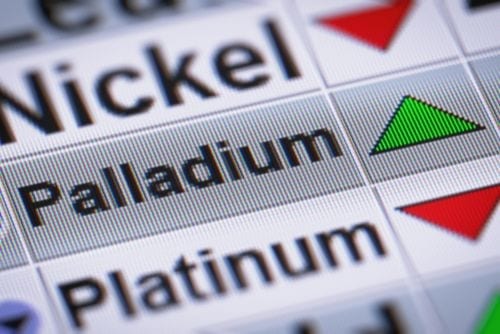 The price of palladium spiked to an all-time high of over US$1,600 per ounce on Tuesday as supply continues to tighten.

Palladium climbed to an all-time high of over US$1,600 per ounce during Tuesday’s (March 19) session thanks to a supply outlook that has grown tighter.

In addition to the growing supply deficit, there are also whispers that Russia may soon cut its output of the precious metal.

“The story remains the same [for palladium] as long as there is tight supply,” said Saxo Bank analyst Ole Hansen.

“There are also stories of Russians potentially cutting supply [of precious metal scraps and tailings] that is adding to a very bullish scenario.”

Currently, the trade and industry ministry of Russia, which is a top palladium-producing country, has begun contemplating a temporary ban on the export of precious metals scraps and tailings for a five-month period beginning on May 1 of this year.

Although many market watchers are speculating that automakers may soon trade the high-priced palladium for the much cheaper platinum, as both metals are emissions-reducing catalysts in automobiles, this process would be considerably time consuming and inconvenient.

“Platinum cannot substitute directly in the same quantities. You would need significantly more, you would need to change the layout, [as] they respond differently to heat and the chemistry,” Jim Gallagher, CEO of North American Palladium (TSX:PDL,OTC Pink:PALDF), recently told the Investing News Network.

“The real fact is that the palladium market, which is not known by most people, is actually larger than the platinum market. So you would be shifting from a market that is already in deficit to a smaller supply base,” he added.

While Gallagher believes that palladium’s rally is not speculative and is solely based on supply and demand, many analysts are predicting that the precious metal is headed for a bubble and that high prices are not sustainable.

However, the Saxo Bank analyst added, “as long as we see no change in the outlook for tight supply or changing demand dynamics from consumers, the price could go higher.”

Moving forward, FocusEconomics analysts foresee a price correction for the precious metal this year, with the analysts stating, “prices are likely currently running ahead of fundamentals.”

“Softer global economic momentum could also feed into lower demand for the metal. However, palladium prices should remain elevated by historical standards, supported by the ongoing supply deficit, the shift away from diesel vehicles and tighter environmental regulations,” they said.

Could the Silver Price Really Hit US$130 per Ounce?
When Will Silver Go Up?
What Was the Highest Price for Silver?
Platinum, Palladium Drop Over 40 Percent as COVID-19 Reverses Gains