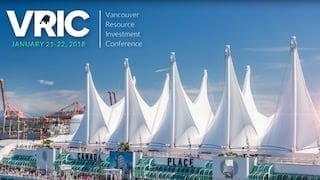 Did you miss this year’s Vancouver Resource Investment Conference? We’ve gathered all our video interviews from key speakers in one place.

This year’s Vancouver Resource Investment Conference saw a slew of experts share their vast knowledge of the resource space.

Co-produced by Cambridge House and Katusa Research, the two-day show was held in Vancouver from January 21 to 22. The trade show floor was expanded by about 40 percent compared to 2017, and the event garnered an audience that was four times higher.

If you missed it, don’t worry — we’re ready to fill you in. From analysts to CEOs, the Investing News Network interviewed important players about commodities such as gold, uranium, silver, copper and even cannabis and bitcoin. Keep scrolling to view all of our video coverage from the conference.

Doug Casey: Will the Next Bubble be in Mining?

Doug Casey is both a best-selling author and chairman of Casey Research, and he believes that the next bubble will be in gold, silver and other metals.

“They’re the only things in the world that are cheap right now. Everything else is sky high and promoted, but nobody cares about the mining stocks. I want to be there for that reason … when these little mining stocks run, they don’t just double, they go 10 to one, they go 50 to one. I think a smart speculator, as opposed to an investor … would put his money into small mining exploration companies,” he says.

Peter Schiff: It Could be Over for the Dollar

The US dollar has taken several hits this year, and Peter Schiff of Euro Pacific Capital thinks this decline shows evidence that it is “over for the dollar.” He states, “now the dollar is just going to be another currency, and that’s going to be a game changer.”

Rick Rule of Sprott US Holdings sees 2018 being uranium’s time to shine. He says, “the determinate as to whether 2018 is the year that uranium really moves will be made by the pace of Japanese reactor restarts.” Rule goes on to clarify that even if the uranium market doesn’t turn around this year, it’s “a when market — there’s no doubt it’s going to happen.”

Nick Hodge: It’s Not Too Late to Invest in Uranium

Excitement about uranium prices and stocks is on the rise, but Nick Hodge, founder and president of the Outsider Club, believes there is still time to invest in the the sector before it really starts to move.

He states, “you haven’t missed anything yet. I gave a talk here about uranium two years ago, [when] the sector was down 90 percent. Here we are with all these catalysts and production cuts, and the sector’s only down 88 percent — so you haven’t missed that much … there’s more to come for uranium.”

Mike Alkin: The US Energy Security Situation is Perilous

The US energy security situation is precarious, says Mike Alkin of the Stock Catalyst report. “The US consumes 50 million pounds a year of uranium. It only produces 2.9 million pounds. So we import 95 percent, 40 percent comes from Russia and Kazakhstan and Uzbekistan,” he comments.

David Morgan: These Factors Could Spark a Silver Feeding Frenzy

While the silver sector has been struggling, David Morgan, publisher of the Morgan Report, predicts that the metal will rise. “If we get the situation that I believe we will, we [will] see investment demand taking silver higher and higher, [and] it could squeeze the industrial silver available. That will start a feeding frenzy that will kick back to the investor side … and we will see more investor demand.”

Ed Steer, who publishes Gold and Silver Digest and is a member of GATA, is adamant that anyone investing in precious metals should know that the markets are managed by central banks.

He shares that, “JPMorgan (NYSE:JPM) [is] the main culprit … but like all market rigging operations, it will end.” He adds, “I think this price management scheme’s days are numbered … [and] I can tell you right now if you’re not positioned the day before, the day after you’re going to be out of luck.”

John Kaiser of Kaiser Research is bullish on gold, and he shares a few reasons why in this video. He notes, “a move into [the] $1,600, $2,000 range is very plausible without it being inflation driven. I think this is going to happen this year — this will kickstart the gold part of this market and driving it is Donald Trump’s declaration that America is no longer great.”

Brent Cook & Joe Mazumdar: Top Stocks and What to Look for in Juniors

Brent Cook and Joe Mazumdar of Exploration Insights address the decline in exploration in recent years, stating that “majors have cut their exploration budgets, but their reserves have not increased, so right now they are looking more and more into investing in junior explorers that fit their criteria”

Brien Lundin: These Juniors Will Respond First to the Metals Rally

Lundin says investors should look at junior mining stocks, which “have yet to respond to the rally in metals.” He adds, “you need to look for junior companies that have large resources — large, identified gold and silver resources. They have yet to really respond to this, and they’ll be the first movers.”

The cryptocurrencies vs. gold debate continues to thrive, and here Frank Holmes of US Global Investors takes on the discussion, addressing what bitcoin has done for blockchain technology. “Blockchain is going to revolutionize all payment systems. Bitcoin is what email was to the internet, bitcoin is waking the world up to blockchain technology,” he says.

Jeffrey Christian: Cryptocurrencies May Not be Gold’s Problem

Although industry experts have been pitting cryptocurrencies against gold for some time now, Jeffrey Christian of CPM Group (HKEX:1932) believes that the market is gold’s biggest threat.

“What is distracting investors from gold is the stock market,” he says. He also notes that he wouldn’t be surprised to see a market correction of up to 20 percent in the S&P 500 (INDEXSP:.INX) and the Dow Jones Industrial Average (INDEXDJX:.DJI) over the course of the year.

The price of gold increased more than 13 percent last year, and gold stocks underperformed the yellow metal. But Adrian Day of Adrian Day Asset Management does not believe that will continue in 2018.

“I think gold has definitely turned the corner, and I expect a much stronger gold market this year,” Day says. “The biggest challenge right now is finding enough ounces to replace the ounces we are producing, as discoveries are in a 20-year downtrend.”

David Erfle of JuniorMinerJunky is bullish on gold, silver, copper and zinc. In regards to gold, he’s looking for a monthly close above $1,375 per ounce because “once that happens we’re technically in a bull market.” Erfle adds, “silver juniors right now are leading, which is very bullish.”

While most investors who buy precious metals tend to gravitate towards gold and silver, Mercenary Geologist Mickey Fulp thinks there is a case to be made for purchasing physical platinum.

Author Gianni Kovacevic shares that copper demand from electric vehicles could rise by as much as nine times in the next decade. “The demand for copper will increase in the next 20 years by about 50 percent due to the intensive electrification of global energy,” Kovacevic says.

Cannabis is a sector that has gone from zero to $20 billion in about four years in terms of market-cap growth. James Black of the Canadian Securities Exchange says that those stats are “insane,” commenting, “we’ve never seen such velocity.” He also notes, “around 80 percent of our listing and trading and fundraising activity last year was tied to growth in the cannabis market.”

Ryan Irvine, president and CEO of Keystone Financial, discusses how to choose a small-cap stock and encourages investors to build a portfolio using a strategy called “focused diversification.” He says that involves “picking 10 to 12 stocks from varying sectors, and buying them over the course of a year. Overall that equates to buying one to two stocks per month.”

Aaron Dunn: Be Wary of “Buying into the Hype”

KeyStone Financial Senior Analyst Aaron Dunn explains that investors often make the mistake of “buying into the hype,” and points to the cannabis, blockchain and the junior mining sectors as places where that can happen. He emphasizes that companies must be able to generate revenue and be profitable in order to keep investor enthusiasm intact.

Dunn explains that when enthusiasm fades, “it is definitely catastrophic and you see share prices fall off extremely quickly. The vast majority of shareholders that take that strategy with a significant portion of their capital end up losing a lot of money in the long term.”