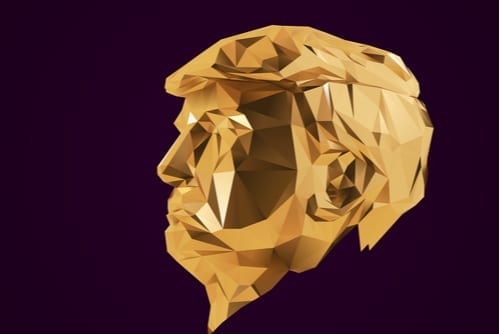 Everyone’s got an opinion on US President Donald Trump — including gold market watchers. We look at whether or not he’s good for the metal.

Everyone has their opinion on US President Donald Trump. Whether it be about his policies or outrageous statements, people can’t stop talking about what he’s done and what he may do next.

For resource-focused investors, one key question about Trump is how he may affect the gold price. Though he’s definitely caused the yellow metal to move both up and down since he was elected (and even before that), gold market watchers don’t seem to have reached a consensus.

Read on to learn more about what’s happened to the gold price since Trump was elected, and for a brief look at what his presidency could mean for gold stocks and the gold standard. It’s hard to find concrete answers, but it’s certainly possible to explore the possibilities.

Trump was elected president on November 8, 2016, and on the back of the news the gold price took a fairly steep plunge. The Kitco chart below, which lays out gold’s movement from November 2016 to September 2019, shows that gold was trading at just under US$1,276 per ounce the day of the election, but was well below US$1,200 in December 2016.

That price drop was a surprise for many involved in the gold space. Prior to the election, a slew of analysts were predicting that a Trump win would push the gold price higher — perhaps even to US$1,400. Their thinking was that a Trump victory would lead to widespread uncertainty; gold, which tends to fare well in times of turmoil, would thus benefit.

So what happened? While the gold price had many influences in the days after Trump’s election, overall it appears that its drop was largely the result of strength in the US dollar and concern that the US Federal Reserve would raise interest rates in December.

“Mr Trump managed to sound quite conciliatory and presidential in his victory speech … There was none of the harsh rhetoric that we heard during the campaign,” Mitsubishi’s Jonathan Butler explained the day after the election. “This calmed the markets and helped boost the dollar, eroding gold’s gains.”

Since then, the gold price has largely staged a recovery — in fact, the yellow metal has recently reached highs not seen in over six years.

The gold price recently surged through a more than six year peak, climbing over US$1,550 per ounce as concerned investors sought safe haven refuge from heightened US-China trade tensions.

Aside from the trade war, factors like last month’s interest rate cut have led to increased demand for the yellow metal. Market watchers believe the cut shows that US and global economies are weakening.

“China is not only fighting to maintain its control over Hong Kong, but continues to fight the Americans over trade. In my opinion, the longer this goes on, the worse it is for the global economy, as China remains an integral piece of the financial puzzle,” Brian Leni, founder of Junior Stock Review, told the Investing News Network (INN) via email.

The situation between the US and China has been grabbing the attention of market participants for over a year now, triggering concerns around a global slowdown.

Speaking about gold’s positive price move on Monday, Brien Lundin, editor of Gold Newsletter, shared Leni’s sentiment on the rally, telling INN, “Right now, the primary drivers for gold have been the US-China trade dispute and the explosion in negative-yielding bonds worldwide.”

This is one of the major ways in which Trump has affected the price of gold. His decision to increase tariffs and spark trade war concerns has sent many investors running towards the yellow metal as a safe haven from the geopolitical turbulence.

Another way that Trump has influenced gold is through his continuous insistence that interest rates need to be cut in order to help the US’ stagnant economy.

After ignoring Trump’s wishes for almost a year, the Federal Open Market Committee, led by Jerome Powell, finally cut interest rates at the end of July. The Fed knocked rates by a quarter point to a range of 2 to 2.25 percent, which initially sent the yellow metal down slightly, but had been one of the factors behind its rally in the months since.

EB Tucker, a director at Metalla Royalty & Streaming (TSXV:MTA,OTCQX:MTAFF) and the mind behind two publications at Casey Research, told INN that he believed that the Fed’s decisions moving forward will be beneficial for the yellow metal.

“The Federal Reserve made some statements that they were going to take seriously the notion of making the money supply softer. And historically … they never do a little bit of loosening. They start loosening and they tend to loosen for awhile, so to me that meant, ‘Here it comes,’” he said.

If you are interested in seeing where gold prices have been in the past in order to get a better perspective on how Trump may be shaping them in the present, check out INN’s handy guide to the historical changes in the gold price.

What about gold stocks?

While it’s important to consider the impact Trump is having on the gold price, it’s also worth looking at what what his presidency could mean for gold stocks. Many experts believe that companies mining for gold and other metals in the US could benefit during Trump’s time in office.

David Morgan of the Morgan Report and Mercenary Geologist Mickey Fulp are a couple of market watchers who have suggested that Trump could make it easier for mining companies to move forward. And, indeed, that seems to be the case so far. Trump has approved projects, reduced regulations in some industries and cut protections on monuments, allowing miners to harvest once-sacred land. All of these measures support the mining industry and mining stocks, although there are more factors at play that are beyond the government’s reach.

While not everyone agrees that gold’s current price is a direct result of Trump’s position in power, it’s worth noting what market watchers have predicted in terms of where the price of the yellow metal could go during his time as president.

For Lundin, he believes that there is a potential US recession on the horizon, which would certainly boost gold prices. “The prospect of ultra-low to negative real rates for as far as the eye can see justifies much higher gold prices. Add in the political and economic uncertainties, including the potential for a US recession, and I think gold will breach US$1,600 before the end of the year.”

John Kaiser of Kaiser Research, shares Lundin’s sentiment that gold prices are bound to go up, telling INN, “I think we are in the early stages of seeing a massive repricing of gold into the US$2,000 to US$3,000 per ounce range.”

There are, of course, analysts who believe gold’s reign will be short lived. Analysts who were recently polled by FocusEconomics see gold prices slightly dipping by year-end, averaging approximately US$1,388 per ounce in Q4.

Trump and the gold standard

As a final note, investors may want to be aware of Trump’s comments on the gold standard. The system, which would link the value of the US dollar directly to the price of gold, has not been used in the country since 1971, but there’s been speculation that Trump might be interested in returning to it.

Trump’s fascination with gold began somewhere in the 1970s, when private ownership of gold bullion became legal again. He reportedly invested in gold aggressively at that time, buying the precious metal at about US$185 and selling it between US$780 and US$790.

Since then, Trump has specifically praised the gold standard. In an oft-quoted 2015 GQ interview that covers topics from marijuana to man buns, Trump said, “Bringing back the gold standard would be very hard to do, but boy, would it be wonderful. We’d have a standard on which to base our money.” In a separate interview from the same year, he said, “We used to have a very, very solid country because it was based on a gold standard.”

According to Politico’s Danny Vinik, “(Trump has) surrounded himself with a number of advisors who hold extreme, even fringe ideas about monetary policy. … At least six … have spoken favorably about the gold standard.” This includes Judy Shelton, John Allison, Ben Carson and David Malpass. The last two — Rebekah and Robert Mercer — have distanced themselves from Trump’s campaign in recent months, but had strong influence on him before that.

Emphasizing how unusual the support for the international gold standard around Trump is, Joseph Gagnon, a senior fellow at the Peterson Institute for International Economics, told the news outlet, “(It) seems like nothing that’s happened since the Great Depression.” Gagnon, who has also worked for the US Federal Reserve, added, “You have to go back to Herbert Hoover.”

Politico also quotes libertarian pundit Ron Paul, another supporter of the gold standard, as saying, “We’re in a better position than we’ve ever been in my lifetime as far as talking about serious changes to the monetary system and talking about gold.”

Aside from the company he keeps, newsletter writer Jay Taylor points out that Trump’s tariffs and Iranian sanctions could have been motivated by an attempt to reduce the trade deficit and in effect claw back the dollar to US soil. Whether or not it’s working is in question, but Taylor points out that Trump’s efforts on money supply would be more effective if the gold standard was restored.

Of course, the fact that Trump and other members of his party like the idea of the gold standard doesn’t mean they will push for a return to it. If they do, however, gold would almost undoubtedly benefit. That said, Trump has admitted that it would be difficult to bring it back: “We don’t have the gold.”

7 responses to “Is Donald Trump Good for the Gold Price?”