The year started off slow for gold M&A activity, but the space has heated up in the second quarter — and more deals could be in store.

Global merger and acquisition (M&A) activity is down as much as 30 percent year-over-year, but there have been some sizeable deals in the gold sector in May.

Midway through the month, three deals were in the works, including a since-abandoned three way merger that would have seen Gran Colombia Gold (TSX:GCM,OTCQX:TPRFF) acquire both Gold X Mining (TSXV:GLDX,OTCQX:SSPXF) and Guyana Goldfields (TSX:GUY,OTC Pink:GUYFF), plus a merger between SSR Mining (TSX:SSRM,NASDAQ:SSRM) and Alacer Gold (TSX:ASR,ASX:ASR). Meanwhile, Adriatic Metals (ASX:ADT,LSE:ADT1) was planning to purchase Tethyan Resource (TSXV:TETH).

The SSR Mining deal has been described as a merger of equals, while Adriatic said the Tethyan acquisition would bolster its portfolio with Serbian assets.

Gran Colombia’s ambitious tie up was touted as a friendly merger with Gold X and a hostile takeover of Guyana Goldfields; both deals were contingent on the other being finalized.

“When you see deals happening, that means first of all that mining executives have confidence in the gold bull market, they have enough confidence that they’re pulling the trigger,” she added.

According to Preston, these large-scale deals create synergy in the sector, which incites investor interest and promotes further activity.

“It encourages the other miners to also make the kinds of M&A moves that they’ve been considering because they don’t want the assets to get scooped out from under them,” she said.

Speaking about the “3G” deal, Preston said that hostile takeovers tend to lead to bidding wars, which only amplify gold market momentum. As mentioned, the deal is now off the table — Gran Colombia ultimately announced that it would not be going through.

According to financial market data provider Refinitiv, the first month of 2020 brought the smallest number of takeovers and deals in almost seven years.

However, despite the onset of COVID-19, a rising gold price and spiking demand appear to have paved the way for second quarter deals, as outlined above.

And while global M&A activity was lower initially in 2020, gold sector deals — especially in Canada — have been ramping up since late 2018. In fact, 2019 saw a large amount of deal-making for gold companies in the country, with the total amount ringing in at C$31.8 billion.

“M&A usually increases in the early stages of a bull market, and so the increased activity in the gold space is certainly positive,” said Derek Macpherson of Red Cloud about the latest round of M&A.

“Additionally, these transactions (whether all-share or cash) often free up the capital of large institutional investors, allowing them to re-invest in the space, benefiting other companies.”

From January to December of last year, there were more than a dozen deals, ranging from total takeovers to project purchases. 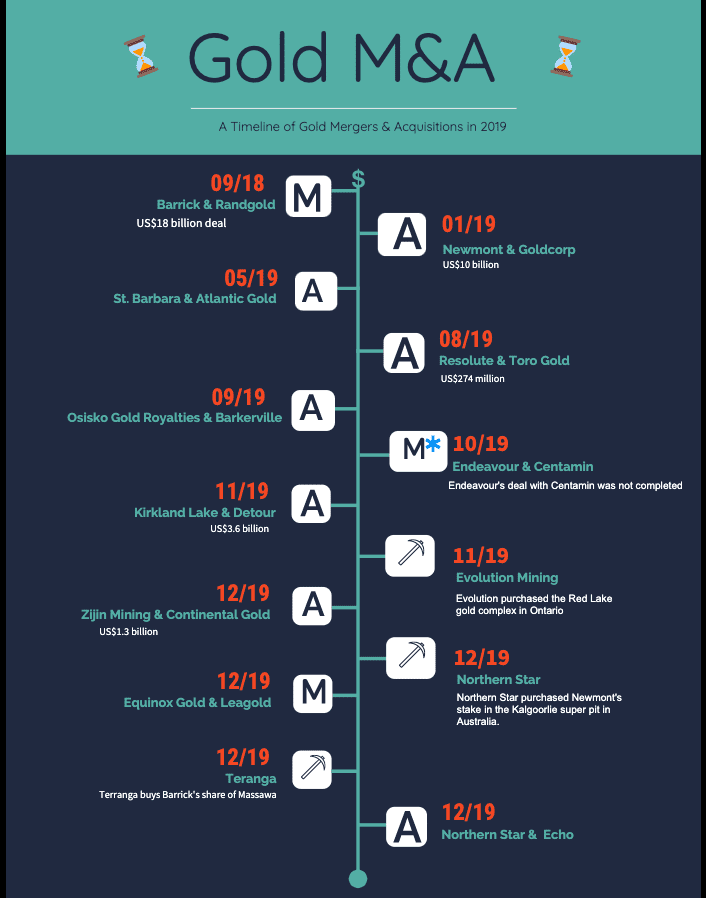 The year started with one of the most lucrative acquisitions in mining history, when Newmont (TSX:NGT,NYSE:NEM) announced plans to purchase Goldcorp for US$10 billion, creating the largest gold company globally by output.

The Newmont/Goldcorp merger came several months after Newmont declared its aim to spend US$18.3 billion on Randgold Resources.

By August, news that Resolute Mining (ASX:RSG) would be acquiring Africa-focused junior Toro Gold was making rounds. Resolute’s decision was largely centered on adding the Mako mine in Senegal to its portfolio of projects.

The final quarter of 2019 saw a surge in activity, with eight of the 12 deals occurring during this period.

There was an also an increase in project purchases during this time.

Of the deals announced during Q4 2019, Endeavour Mining’s (TSX:EDV,OTCQX:EDVMF) proposed all-share merger with sector cohort Centamin (TSX:CEE,LSE:CEY) was the most noteworthy.

The deal would have created an African gold producer operating in three countries, but before the end of 2019 the deal fell through due to Centamin’s belief that the C$2.5 million deal was a low-ball offer.

A friendly merger between Equinox Gold (TSX:EQX,NYSEAMERICAN:EQX) and Leagold Mining (TSX:LMC,OTCQX:LMCNF), and a takeover of Echo Resources (ASX:EAR) by Northern Star Resources (ASX:NST), capped off the year.

Is more M&A activity coming to the gold space?

As can be seen, 2019 was an eventful year in terms of M&A, and while 2020 has been marked with unprecedented uncertainty, experts and analysts believe the gold sector is primed to see more deal-making as the year progresses.

“My view would be that much of the M&A that is being undertaken currently results from pre-COVID-19 due diligence,” said Macpherson.

“Good M&A is always positive, but with current travel restrictions, executing proper due diligence could be a challenge, and may delay transactions from closing, but not from being announced.”

While billion-dollar deals made by majors tend to dominate in the news cycle, Macpherson noted that in the long-term smaller companies are ideally positioned.

“Historically, majors outperform in the early stages of a bull market, and this round of M&A focused on smaller companies could provide a boost,” said the Red Cloud analyst.

He continued, “Our work suggests that in a bull market it is ultimately the smaller companies that outperform, and in our view it’s just a matter of time before the smaller-cap gold companies outperform their larger peers.”