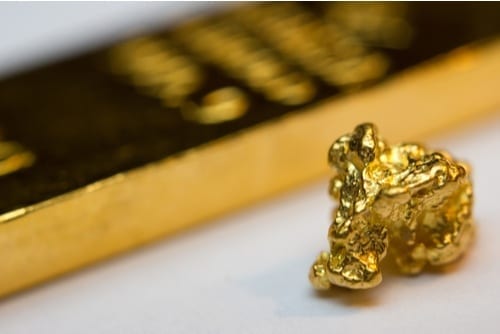 What happened to gold in Q1 2020? Our gold price update outlines key market developments and explores what could happen moving forward.

Though volatility reigned supreme in the first quarter of 2020, gold was able to retain its 2019 gains and end the period 1.6 percent higher than its starting value.

January and February saw the yellow metal trend higher as regional concerns in China regarding the coronavirus began to spread around the world and investors sought refuge.

Gold climbed as high as US$1,659.40 per ounce in February as geopolitical tensions between the US and Iran, and a phase one trade deal with China, also impacted prices.

March brought gold’s highest quarterly price of US$1,679.60, as well as its lowest — US$1,471.40 — as margin calls led to massive selloffs and central bank stimulus packages were introduced.

“Q1 of 2020 has been one for the history books,” said Brian Leni of the Junior Stock Review. “Not only did we see the global outbreak of COVID-19, but we saw governments around the world respond with the largest quantitative easing packages we have ever seen.”

Travel bans and country lockdowns led to economic turmoil, driving global markets into a frenzy, with the S&P/TSX Composite Index (INDEXTSI:OSPTX) exhibiting its worst showing in 80 years in mid-March, while the Dow Jones Industrial Average (INDEXDJX:.DJI) recorded its poorest day since October 1987.

“In the face of massive selling due to marginal calls, gold held up simply because it is insurance against the debasement of currency, and I fully expect to see new all-time highs this year,” said Leni.

The massive influx of uncertainty pushed gold to a seven year high of US$1,659.40 in mid-February as early tallies showed the coronavirus had wiped out US$5 trillion in value from global markets.

Towards the end of the month, news that central banks would cut interest rates to prop up the economy amid the pandemic weighed on the currency metal, which fell below US$1,600.

The yellow metal remained rangebound at US$1,590 for the first few days of March before starting to tick upward. By March 9, gold had hit its quarterly high US$1,679.60.

At this year’s Prospectors & Developers of Canada Association convention in Toronto, the impact the coronavirus could have on global economies, markets and the resource space was a key topic.

While some analysts downplayed the long-term effects that COVID-19 could have on the gold market, others advised investors to prepare for the worst by looking to the precious metal.

“When you look around the world, of all of the asset classes of all of the markets, gold to me does have the best risk/reward in the current environment, so I would certainly recommend a pretty high allocation for all investors,” said Adrian Day of Adrian Day Asset Management.

Ultimately, the consensus was that gold would benefit from the widespread uncertainty a global pandemic could bring, but how much the safe haven metal would gain see remained unclear.

“I think we’re heading into a major repricing of gold into the US$2,000 to US$3,000 range, which now I’m even a stronger believer in with the uncertainty that the coronavirus is injecting,” said John Kaiser of Kaiser Research at the time.

On March 11, the coronavirus was officially declared a global pandemic, and gold, which had been slipping lower since hitting its three month high, fell to US$1,529.90 on March 13.

The 8.9 percent price drop over four days was brought on by the first round of COVID-19-related travel restrictions introduced by US President Donald Trump.

Not only did the yellow metal react poorly to the news, but the decision to restrict most travel originating from Europe sent the markets into a nosedive, as US stocks fell into bear market territory.

By March 15, the US Federal Reserve had implemented a second emergency rate cut of 100 basis points, bringing down the benchmark rate to almost zero. The Fed also launched a quantitative easing program with the aim of boosting its bond holdings by at least US$700 billion.

The losses continued and gold’s safe haven nature wasn’t enough to buoy it up in the market chaos, as investors looked to mitigate losses in other sectors by liquidating the yellow metal.

The mass selloff led to the metal’s poorest showing in six months — it fell more than 7 percent from the beginning of the month to sell for US$1,471.40 on March 19.

The fluctuation in performance was no surprise to Mercenary Geologist Mickey Fulp, who attributed gold’s early Q1 ascent to seasonal demand, which tends to rise in autumn and last through January.

The fall this year was more pronounced due to the opaqueness COVID-19 has placed on markets.

“When the markets crater, (investors) have to sell whatever is liquid,” said Fulp. “If they don’t have enough cash, they’ve got to sell their gold or go to cash to cover their margin calls.”

The week of March 16 also saw the first round of mine closures and project rampdowns, as producers and explorers aimed to comply with various country-led social distancing and shutdown efforts.

The rapid rise in cases in an Italian town bordering Switzerland also led to the temporary shuttering of three of the world’s largest gold refineries in the following days.

By March 23, the gold liquidation had ended, and supply disruptions due to the closed mines and refineries began to benefit the yellow metal, with safe haven demand once again growing.

Calls for physical gold also increased in this period, with global gold-backed exchange-traded funds (ETFs) adding 298 tonnes, accounting for US$23 billion in net inflows in Q1. Of that, 151 tonnes, or US$8.1 billion, were added in March.

According to the World Gold Council, the soaring interest in ETFs led to the highest quarterly amount ever in US dollar terms and the largest tonnage addition since 2016.

With equity markets in bear territory and country lockdowns being prolonged, gold was able to move past US$1,636, but not for long — the metal slipped back below US$1,600 by month’s end.

Whether gold supply will be greatly impacted by coronavirus closures and supply chain upheaval won’t be known until later in the year, although Leni thinks it’s not likely to motivate prices greatly.

“I find it hard to buy into bullish sentiment on the gold price due to supply and demand issues,” he explained. “The fact is, essentially all of the gold that has ever been mined is still in existence; therefore, it can come back to market at any moment.”

He continued, “In saying this, I do think it is almost a certainty that we will see more people holding gold after this crisis, and therefore this demand will be a very strong price motivator.”

By the end of March, gold had begun to exhibit strength as the toll the pandemic was waging on markets began to become clearer and more widespread than originally thought.

Coffin also noted that demand for the yellow metal will increase as investors move towards assets outside the financial system.

“I think as we come out of this liquidity phase into the insolvency phase, as people recognize the scale of increases in the balance sheet and the money supply that have to be made to come out of the other end of this — I’m expecting much larger gold prices to be the ultimate effect of this deleveraging.”

“What we’ve seen before is gold is going to have its big run, the gold stocks have a bigger correction, and then we’re going to slowly see gold ratchet up. We’re in an election year in America. There’s going to be no raising of rates for at least a year, maybe 18 months, the same thing the rest of the world.”

This sentiment was repeated in a CIBC equity research update released on March 23. Analysts at the firm noted that without a significant breakthrough in the short term, the pandemic would continue to insert volatility and uncertainty into equities and leave interest rates in their current position.

“We continue to believe gold and gold equities offer an attractive risk/reward scenario — either the recession is extended, or governments further open the flood gates for both monetary and fiscal stimulus. Both would argue for an asset like bullion,” the note reads.

The case for gold was also reiterated by Fulp, who sees no other asset class retaining strong growth amid the pandemic aside from the yellow metal.

“So really, the demand is going to be safe haven gold. You have all this stimulus, monetary stimulus, increasing the money supply all over the world, that’s positive for gold. So all in all you have to look at gold and think, well I’m glad I bought it at US$1,470.”

In terms of price, many analysts remain bullish on gold currently and into the immediate future.

“I think we will see gold hit a new all-time, non-inflation-adjusted high above US$1,900 by the end of the year,” said Leni. “Unlimited quantitative easing while tempering markets in the short term is horrible news for our future. This debt will have to be paid by someone.”