In part one of a series on Ghana, INN takes a deep dive into the challenges, strengths and future of the country as a gold nation.

Ghana is a mining nation on the rise: a beacon of stability and a magnet for investment in West Africa, a region with countries that are often still dealing with the repercussions of colonial wrangling and small arms conflict.

The country is home to a healthy and growing gold mining community that hails from all corners of the Earth, with Canadian, South African and Australian miners operating there. As of recently, it is also Africa’s largest gold producing nation, having snapped up the top spot from South Africa.

Ghana is a nation with some growing pains ahead of it, though, with a promising future that has plenty of hurdles to overcome before it matures in its role as one of the world’s premier mining districts — and its new position as Africa’s largest gold producer means that the world is watching.

In three articles, the Investing News Network (INN) will take a closer look at this West African nation, exploring the reality on the ground, the challenges it and miners operating there need to overcome, its considerable strengths as a mining jurisdiction and what the future holds for the country.

The reality in Ghana

In 2018, Ghana overtook South Africa as the continent’s premier gold-mining jurisdiction, producing 180 tonnes of the precious metal compared to South Africa’s 120 tonnes, according to US Geological Survey data.

South Africa had led the continent in gold production as recently as 2017, when it produced 145 tonnes to Ghana’s 80 tonnes. South Africa is famed for being built on its mining industry, having held the title of the world’s largest gold producer for a century; however, that title is now held by China.

Its decline has been long and painful as its gold mines became deeper, more technical, more expensive and less profitable, while other global gold producers overtook the country over the past few decades — including Canada in 2014, as you can see in the chart below. 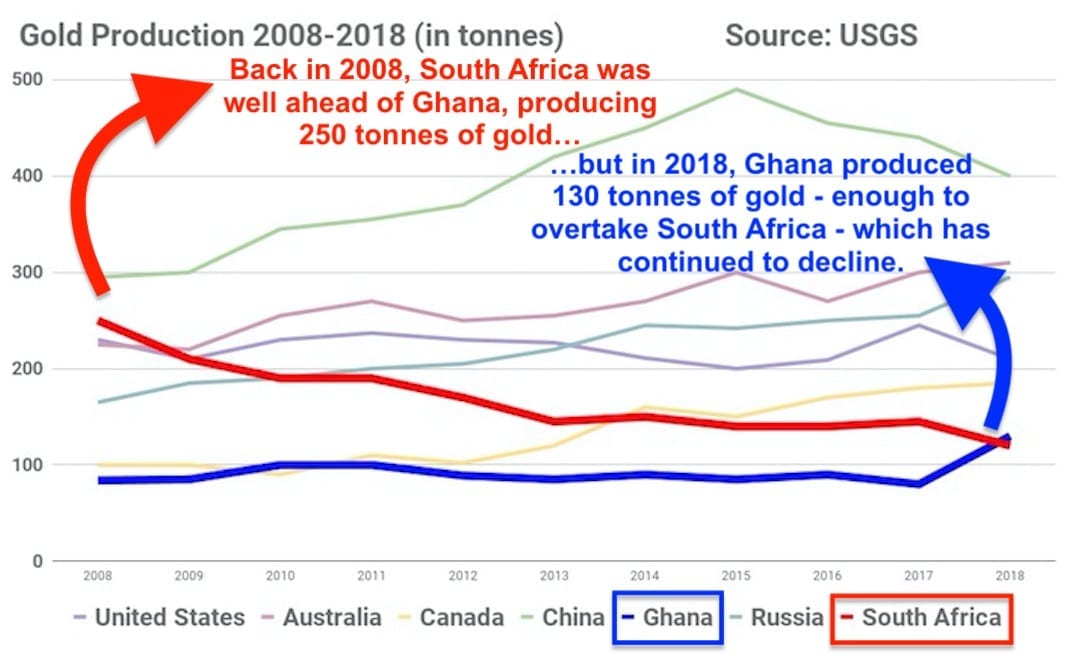 For its part, Ghana has been playing second fiddle to South Africa on the continent for awhile now despite being home to the prolific Ashanti belt, which has been mined for centuries.

The country is riddled with gold mines operated by well-known companies both big and small; Newmont Goldcorp (TSX:NGT,NYSE:NEM) with its Akyem and Ahafo mines, Kinross Gold’s (TSX:K,NYSE:KGC) Chirano mine and AngloGold Ashanti (ASX:AGG,NYSE:AU), which has committed to spending half a billion dollars on bringing its Obuasi mine back to life — but more on that later.

Jeff Swinoga, who is Canadian mining and metals leader with Ernst & Young (EY) and worked as an executive with Golden Star Resources (TSX:GSC,OTCQB:GLNS) which operates in Ghana, told INN that looking at the miners operating in the country and the money that’s being invested is proof enough that the gold world is very interested in what it has to offer.

Another former executive from Golden Star, Samuel Coetzer, who was CEO from 2013 to 2019, told INN that Ghana’s rise was not a surprise given the roll call of miners operating there.

“My expectation is we’re going to see more investment going into the Ashanti gold belt in Ghana; for instance, people are starting to find deeper gold, which is not a surprise.”

Ghana is a nation with lots of challenges ahead despite its new title as Africa’s largest gold producer. In our next article on Ghana we’ll explore the country’s geography and political situation as well as its infrastructure concerns, with more input from Swinoga of EY and Coetzer, formerly of Goldenstar Resources, as well as thoughts from Charles Dumbrille of In-D-Tel International.