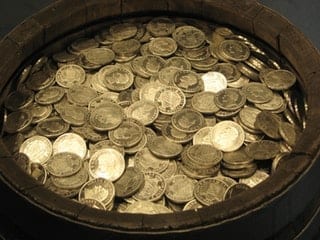 As the gold price continues to flirt with $1,300 per ounce, many investors are looking for ways to play the market. Buying physical gold remains a reliable standby, but gold stocks are also a popular option.
Abitibi Royalties (TSXV:RZZ) isn’t a typical gold stock, but President and CEO Ian Ball believes it’s worth a look. Speaking via phone, Ball described his company as “the only royalty company right now where the main driver of value is exploration,” and suggested that Abitibi’s other attributes — such as its declining share count and investment portfolio — only add to its appeal.
The company’s key assets are the net smelter return (NSR) royalties it holds on the Canadian Malartic mine. Located in Quebec, it began producing in 2011 and is now one of Canada’s largest gold mines. Originally the mine was owned by Osisko Mining, but major miners Yamana Gold (TSX:YRI,NYSE:AUY) and Agnico Eagle Mines (TSX:AEM,NYSE:AEM) took over the company in 2014, and launched the Canadian Malartic Partnership to operate the mine.


Give me my free report!
Exploration at Canadian Malartic is ongoing, and Abitibi holds NSRs on several parts of the property. Those include a 3-percent NSR on the eastern portion of the mine, where the Jeffrey zone and Barnat extension are located, and a 3-percent NSR on the Odyssey North discovery. Abitibi also has a 2-percent NSR on an area located 300 meters south of the main pit.
“Royalty cashflow is expected to begin next year with the commencement of production at the Jeffrey zone,” said Ball. “It got its major approval in the second quarter, and they’ve now started to prepare the area for mining.” Production is set to begin at the Barnat extension in 2019, and Abitibi will receive additional cashflow at that point.
An ongoing drill program at Canadian Malartic offers further upside — according to Ball, Yamana and Agnico Eagle have completed about 25,000 meters of drilling each quarter for the last six quarters. “It’s something that is extremely positive [for Abitibi],” he said. “If we were to do that work as an exploration company it would be quite expensive.”
He said Abitibi has royalties over “quite a few” of the areas where drilling is now focused. In particular, he’s interested to see new results from the Internal zone, which is located at Odyssey North. “Some of the best drill holes that we’ve seen from the property are coming from the Internal zone, and that seems to be the primary focus for Yamana and Agnico Eagle at Odyssey North,” he explained.
Ball is also eager to see how work at the eastern part of Canadian Malartic progresses. Parts of a past-producing mine in the area are covered by one of Abitibi’s NSRs, and he said that Yamana and Agnico Eagle have “started exploration with the view to evaluate it for mining again.” The mine produced around 2.5 million ounces from about the 1930s to the 1980s, and Ball believes it’s “potentially the next catalyst for when results start coming in.”
Yamana and Agnico are drilling at targets near the main pit at Canadian Malartic as well. “[They’re] tracking known zones to see if they can expand the mine … basically trying to extend the known mineralization,” Ball explained. An exploration update from the two companies is due soon, and details about the companies’ current work should be included.
Aside from Canadian Malartic, Abitibi has a stable of other royalties that Ball has described as “potentially valuable lottery tickets.” Speaking earlier this year, he noted, “we’ve only spent $195,000 to buy 18 of them. If none of them work out it’s not a big deal. But if one of them works out it’s a real positive.”
Since then, two of those royalties have entered into joint ventures. “A large percentage of the properties at Red Lake that we have royalties on have recently gone into joint ventures,” said Ball. “And the property that we have a royalty on that is right next to New Gold’s (TSX:NGD,NYSEMKT:NGD) Rainy River mine is now in a joint venture. We’re pretty optimistic that work is going to start on both of those.”


Give me my free report!
Ball also pointed to the fact that Abitibi has a declining share count and an investment portfolio that includes “large shareholdings in Agnico Eagle and Yamana.” He noted that a lot of work is going at Yamana, saying, “they have two mines that have relatively short mine lives, but they’re making new discoveries that there that I don’t think are being appreciated by the market.” He added that while the company’s third mine has had operational difficulties, “it seems like they’re getting that figured out now.”
“I [also] think people aren’t recognizing that the copper price has improved, and Yamana produces a fair bit of copper from its Chapada mine in Brazil. Yamana I think is one of the companies that has been trading at a discount to its peer group … we’re cautiously optimistic on the Yamana situation and how we see that moving forward,” Ball continued.
In closing, Ball shared his thoughts on where he sees the gold price going in the second half of the year, noting, “one of the things that we’re on the record for saying is that … we see gold trading in a range. When you see gold go up by $50, you hear a lot of commentary that gold is in the next phase of a bull market, or if it drops [you hear] we’re in the start of a bear market. Our view is that it’s probably neither.”
When asked whether he thinks geopolitical events like the recent tensions between the US and North Korea will continue to have an impact on the gold market moving forward, Ball said he sees gold’s fundamentals playing a more important role.
“The geopolitical obviously has an impact, but if you look historically it’s always very short term,” he said, adding, “short term you can see impacts, but long term it is the fundamentals, because the geopolitical does always seem to simmer down. Gold is money, and it is a currency.”
As of 3:30 p.m. EST on Friday (August 18), the gold price was trading at $1,287.34 per ounce. It passed the key psychological level of $1,300 earlier in the day. Abitibi Royalties’ share price was at $9.40, up 7.43 percent year-to-date.
Don’t forget to follow us @INN_Resource for real-time updates!
Securities Disclosure: I, Charlotte McLeod, hold no direct investment interest in any company mentioned in this article.
Editorial Disclosure: The Investing News Network does not guarantee the accuracy or thoroughness of the information reported in contributed article. The opinions expressed in these interviews do not reflect the opinions of the Investing News Network and do not constitute investment advice. All readers are encouraged to perform their own due diligence.