What were the main uranium trends in 2017? Despite low prices throughout the year, output cuts have begun to bring hope to beleaguered miners.

It’s been a tough year for the uranium market, but output cuts, one of the key uranium trends of 2017, have given market participants some hope.
Kazakhstan’s Kazatomprom brought the first round of cuts in January, announcing that it would reduce its annual production by 10 percent to fend off market oversupply. The country is the world’s top uranium-producing country, and the move, initially hailed as a “game changer,” gave the U3O8 spot price a significant boost — it was sitting at $26.68 per pound as of February 1, up 32 percent year-to-date.
Unfortunately, that price momentum was short lived, and the U3O8 spot price was down at $24.50 as of February 20. Commenting via email, GoviEx Uranium (TSXV:GXU) CEO Daniel Major said, “we budgeted for a flat uranium price for the year on the hope that there would be a recovery during [2017] … the long-term fundamentals and price vs. costs differential implied it should [happen].”

Get My Free Report
In the summer and into the fall, the U3O8 spot price sat around $20. Ted O’Connor, CEO and director at Plateau Uranium (TSXV:PLU), said that after Kazatomprom’s news and troubles with Paladin Energy, his company “expected the spot U3O8 price to continue to rise steadily in 2017. We were incorrect to say the least, as the price has been rangebound near the $19 to $21 mark until very recently.”
As of November 27, the U3O8 spot price was at $22, with many market participants expecting further gains. Optimism is being driven by the news that major producer Cameco (TSX:CCO,NYSE:CCJ) plans to suspend production at its McArthur River mine and Key Lake milling operations by the end of January 2018, as well as by a new announcement from Kazatomprom that it will cut output further in 2018.

Cameco’s decision to cut production in 2018 came on the back of “continued uranium price weakness,” and was welcomed by uranium firms. “McArthur River is the largest uranium mine in the world, and shutting it down is a major signal that producers cannot make money at current prices,” said Dev Randhawa, CEO of Fission Uranium (TSX:FCU) and Fission 3.0 (TSXV:FUU).
Research firm Raymond James estimates that global U3O8 output will be reduced by 15 million pounds if the suspension lasts 10 months as Cameco has outlined.
Some have been a little more cautious to embrace the news. As Junior Stock Review founder Brian Leni said, “for many, the recent news from Cameco regarding the suspension of production from its McArthur River mine and Key Lake mill was a sign of a bottom in the market, and it may well be. However, from a quantitative perspective, it is still going to be awhile to unwind the supply glut that overhangs.”
Kazatomprom’s second output cut announcement came in early December, with the firm saying that it will reduce its planned uranium production by 20 percent for three years beginning in January 2018. In all, 11,000 tonnes of uranium will come off the market for the three-year period, which is equivalent to 7.5 percent of total global supply. Kazatomprom is currently private, but it is anticipated that it will go public next year. Also in 2017, the company established a trading subsidiary with an office in Switzerland, allowing it to eventually buy and sell uranium on the spot market.
In terms of supply, it is also interesting to note that Western Australia’s ban on uranium mining came into force over the summer. Only the four uranium projects that have already gained approval in the state will be allowed to proceed. They are Cameco’s Kintyre and Yeelirrie projects, Vimy Resources’ (ASX:VMY) Mulga Rock project and Toro Energy’s (ASX:TOE) Wiluna project.

The “Big 5” consumers of uranium are: the US (27 percent), France (14 percent), Russia (12 percent), China (12 percent) and South Korea (7 percent). The Big 5 consume 123 million of the 175 million pounds of uranium consumed per year.
As the top consumer of uranium, the US receives a significant amount of its energy from nuclear power, with nuclear power providing 21 percent of its electricity. In fact, nuclear power provides electricity for about 23 million homes, or about twice the number of homes in California. “Without nuclear power, the lights would go off for one in five Americans,” says Katusa Research.
In 2017, one of the more interesting uranium trends has been the positive attention uranium has received from the Trump administration. US Energy Secretary Rick Perry declared that “no clean energy portfolio is truly complete without nuclear power” during Energy Week in June, and Mike Alkin of the Stock Catalyst Report has said that the US government is now “very pro-nuclear power friendly,” which is a “sea change from what you saw over the past eight years under the Obama administration.” 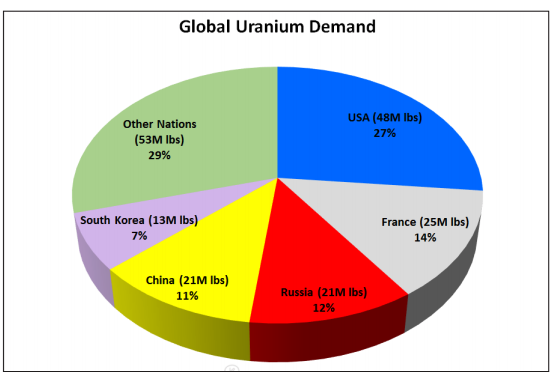 Chart via: Katusa Research.
Of course, challenges remain on the demand side, with one being “the overhang of global inventories held with suppliers and utilities, and enrichment supplier underfeeding,” as per O’Connor. “The perception of oversupply has resulted in depressed uranium prices with utilities and suppliers contracting very little material mid to long term,” he also commented.
He believes a turnaround could be in store moving forward, an idea that was echoed by Randhawa. “UxC estimates that while uncovered demand is only 4.1 million pounds U3O8 in 2017, it is projected to increase significantly from 2018 upwards, reaching 54.9 million pounds uncovered for 2020,” he said, adding, “that represents 29 percent of projected demand for that year, and annual uncovered demand rises even more rapidly after to over 179 million pounds U3O8 by 2030 (approximately 80 percent of total base-case demand).”
It’s worth noting that on October 3, Japan’s Nuclear Regulation Authority gave an initial safety approval to Tokyo Electric Power (TSE:9501), allowing the company to restart two of the reactors at its Kashiwazaki-Kariwa nuclear plant. The unanimous decision from five commissioners marks the first safety approvals the company has been granted since the 2011 meltdown of three units at its Fukushima plant.
However, the governor of Niigata prefecture, where the plant is located, has said he will not discuss a restart until the prefecture completes a review of the Fukushima disaster. The review is not expected to be completed before 2020.
Don’t forget to follow us @INN_Resource for real-time news updates!
Securities Disclosure: I, Melissa Shaw, hold no direct investment interest in any company mentioned in this article.
Editorial Disclosure: Fission 3.0 and Plateau Uranium are clients of the Investing News Network. This article is not paid-for content.