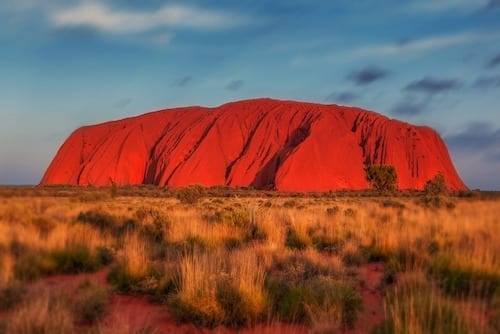 Australia, the third-largest uranium producer in the world, is home to nearly one-third of the world’s known uranium resources.

Australia, the third-largest uranium producer in the world, is home to nearly one-third of the world’s known uranium resources. Although nuclear arms development first spurred uranium exploration and some mining in the 1940s and 1950s, it was the development of nuclear power programs in the western world that gave rise to Australia’s current uranium mining industry.

Without a nuclear power program of its own, the South Pacific nation exports nearly all of the yellowcake it produces — on average, about 8,300 metric tons (MT) of U3O8 per year, which in 2011 amounted to 11 percent of world uranium supply from mines, according to the World Nuclear Association (WNA). As a member of the Nuclear Non-Proliferation Treaty (NPT), Australia only sells uranium to fellow NPT member nations. The majority of its uranium exports are received by electrical power utilities in the United States, the European Union and Japan. The East Asian markets of China, South Korea and Taiwan are expected to grow in significance as export markets due to rising growth in energy demand. Last month, Australia’s government began negotiations for uranium sales with India even though the Indian government remains opposed to signing the NPT.

The Four Mile in-situ recovery project in South Australia is owned by Quasar Resources, an affiliate of Heathgate, and Alliance Resources (ASX:AGS) through a 75/25 joint venture. The property contains two deposits, one to the east — contiguous to Heathgate’s Beverley mine — and one to the west. The project has a JORC-compliant indicated and inferred resource of 32,000 MT at a grade of 0.33-percent U3O8, according to a WNA publication. The partners were granted a 10-year mining lease in April 2012. In October 2012, Quasar announced that it would commence production at Four Mile East in Q2 2013 (with first uranium sales expected in Q3) and at Four Mile West in Q4 2013, noting that it aims to produce 2.1 million pounds of uranium oxide over 16 months.

The Kintyre deposit in Western Australia is a 70/30 joint venture between Cameco (TSX:CCO,NYSE:CCJ) and Mitsubishi (TSE:8058) with an indicated resource of 25,600 MT U3O8 at 0.49 percent and an inferred resource of 2,400 MT U3O8 at 0.47 percent. Originally slated for mine construction in 2013, Cameco shelved the project last year, citing depressed uranium prices and high development costs. The company’s fourth-quarter 2012 net earnings report, released in January 2013, includes a $168-million writedown on the project.

The Mulga Rock project in Western Australia is comprised of four separate uranium-bearing, polymetallic mineral deposits: Ambassador, Emperor, Shogun and Princess. The project, which is close to production, is held by Energy & Minerals Australia (ASX:EMA). The latest JORC-compliant resource estimate shows an inferred resource in excess of 62 million pounds U3O8. The company plans to mine the Ambassador deposit first, as per WNA information. Total production costs are $24 per pound U3O8 based on 1,200 MT per year from the Ambassador deposit, according to a scoping study.

The Samphire project in South Australia is held by UraniumSA (ASX:USA). The project is comprised of the Blackbush and Plumbush deposits, which together hold an inferred resource of 18,300 MT U3O8 at 0.0275 percent. The majority of the Blackbush orebody can be accessed at less than 50 meters, the WNA notes, making it suitable for an open-pit mine. In 2011, the company applied for a retention lease for an in-situ recovery field trial at the Blackbush deposit.

Paladin Energy (ASX:PDN,TSX:PDN), through a number of subsidiary companies, owns the vast majority of interest (91.04 percent) in the Valhalla/Skal group of properties located near Mount Isa in Queensland. AREVA (EPA:AREVA) holds the remaining percentage through its small stake in Summit Resources (ASX:SMM). The Valhalla uranium deposit alone has a measured and indicated resource of 63.5 million pounds at 830 ppm U3O8, with 12.8 million pounds at 643 ppm U3O8 in the inferred category. The end of the moratorium on uranium mining in Queensland has opened up the potential for monetizing these resources.

The Wiluna project in Western Australia was given the green light by the state government in October 2012 and received federal government approval in April 2013. Owned by Toro Energy (ASX:TOE), the project includes the Lake Way, Centipede, Millipede, Dawson-Hinkler and Nowthanna deposits, which hold a total resource of 24,360 MT U3O8 grading 0.044 percent. The Wiluna mine is expected to produce 780 MT of uranium per year from its two main deposits (Lake Way and Centipede) for a mine life of 14 years. Total costs are projected at US$279 million, with operating costs pegged at $37 per pound U3O8.

Toro Energy has until the end of the year to make a decision about whether or not to move forward with the project. To help fund mine development and construction, this week the company said it is looking for partners amongst seven potential suitors from Japan, China and South Korea, reported Bloomberg. The company has said it is willing to offer a 30- to 50-percent stake in the mine. If the project is a go, Toro anticipates production to commence by the end of 2015.

The Yeelirrie deposit in Western Australia comprises a JORC-compliant measured and indicated resource of 63,000 MT U3O8 with an average grade of 0.13 percent. The project could develop into a low-cost producer of 2,500 MT per year of uranium concentrate. Cameco bought the property from BHP Billiton in 2012.

Aura Energy (ASX:AEE) has three projects in Western Australia: Wondinong, Gunbarrel and Porcupine Well. Wondinong has a JORC-compliant inferred resource of 7 million pounds U3O8 at a 100 ppm cut-off grade. The company is in the process of converting the exploration lease into a mining lease.

Cauldron Energy (ASX:CXU) owns the Yanrey project in Western Australia, an advanced exploration project with a JORC-compliant inferred resource of 4.8 million pounds of eU3O8. The project covers 1,930 square kilometers adjoining Paladin Resources’ Manyingee deposit. Cauldron recently launched a takeover of Energia Minerals (ASX:EMX), which holds the Nyang project, situated along strike from the Yanrey project. The Nyang deposit contains the Carley Bore deposit, which has an inferred resource of 13 million pounds of U3O8.

Energy Metals (ASX:EME) has an extensive portfolio of nine projects covering 4,000 square kilometers in the Northern Territory and Western Australia. The Bigrlyi project in the Northern Territory is the company’s most advanced undertaking and is amenable to open-pit mining. The WNA notes that a 2011 prefeasibility study shows an indicated resource of 7,700 MT U3O8 at a 0.05-percent cut off and an inferred resource of 5,400 MT at 0.082 percent with an associated 16,700 tonnes of vanadium. At current market prices, however, the project is not considered economically viable. Bigrlyi is a joint venture between Energy Metals (53.29 percent), Paladin subsidiary Valhalla Uranium (42.06 percent) and Southern Cross Exploration (ASX:SXX) (4.2 percent). A subsidiary of China Guangdong Nuclear Power owns 60.6 percent of Energy Metals.

In March 2013, Energy Metals released a maiden resource estimate on the Peninsula prospect, which is located within its wholly owned Mopoke Well project in Western Australia. The estimate shows an inferred resource of 3.56 million pounds U3O8 at a cut-off grade of 100 ppm.

Laramide Resources (TSX:LAM) owns the advanced-stage Westmoreland project in Queensland, which has a NI 43-101 compliant resource of 51.9 million pounds of U3O8, including 36 million pounds indicated U3O8 and 15.9 million pounds inferred, with average grades of 0.089-percent U3O8. The company’s other Australian plays include three contiguous joint ventures in the Northern Territory.

One response to “Uranium Mining in Australia”