In the absence of pipelines, US oil producers transport their wares on “virtual pipelines,” about 200 train lines that accommodate oil trains of up to 100 tank cars. 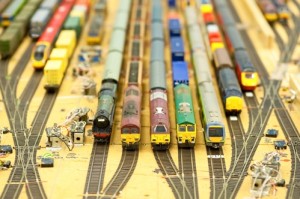 In the absence of pipelines, US oil producers transport their wares on about 200 train lines that accommodate oil trains of up to 100 tank cars.
Unfortunately, this mode of transportation can be dangerous, as is evidenced by the recent spike in rail accidents involving oil trains — since last March, there have been at least 10 large crude oil spills in the US and Canada due to rail accidents, according to The New York Times. Even more alarmingly, the total number of gallons of crude spilled in rail accidents in 2013 was much greater than the total amount from 1975 to 2012.
Explaining the spate of incidents, the news outlet notes that producers, which require ways to get oil to market as quickly as possible, have taken shortcuts and have not necessarily determined how hazardous moving product by train can be. Indeed, approximately two-thirds of the oil produced in the Bakken shale in North Dakota is transported by train, and 10 percent of the nation’s total oil production rides the rails.
Officials urge new solutions
There is an immense amount of pressure on the US railroad system in large part because the country’s oil production has increased markedly with no pipeline infrastructure to support it. Instead, railroads, which many consider archaic, are being tasked with the transportation of extremely valuable cargo.
Railroad executives, the transportation secretary and federal regulators are looking to change that. They recently met and vowed to look for ways to improve the safety of transporting oil by rail, perhaps by slowing down trains and directing them away from populated areas. A review of standards for the train cars that are used to transport oil is also planned, The New York Times notes.
“This is an industry that has developed overnight, and they have been playing catch-up with the infrastructure,” Deborah A.P. Hersman, chairwoman of the National Transportation Safety Board, told the publication. “A lot of what we’ve seen could have been a lot worse.”
However, given that the industry is large and fragmented — different companies produce the oil, own the trains and operate the railroads — a solution may be difficult to achieve. For many, the hope is that those different companies will respond to the growing pressure that is being placed on them.
“There was no political pressure to address this issue in the past, but there clearly is now,” Brigham A. McCown, former administrator of the Pipeline and Hazardous Materials Safety Administration, told The New York Times. “Producers need to understand that rail-car safety can become an impediment to production.”
Are pipelines the way forward?
In January, US and Canadian transportation safety officials warned of a risk of “major loss of life” from these oil train accidents, noting that while pipelines are often opposed as unsafe by environmentalists and others, the breaks and spills that occur in them are most often in unpopulated areas, in contrast to the spills on railway lines.
“The continuing series of rail accidents reminds us that in evaluating whether to build more pipelines, human safety should be a paramount consideration,” Diana Furchtgott-Roth, an economist at the Manhattan Institute, told The Washington Times. “Road and rail have higher rates of serious incidents, injuries and fatalities than pipelines.”
On a similar note, Republican Senator John Hoeven, told Platts, ”[c]learly, pipelines are part of the solution. Most of the pipelines go south. So we need to develop the infrastructure that goes with the energy development and the energy renaissance we are having in this country.”

4 responses to “US Oil Rail Accidents Make Case for Pipelines”