What the “tree huggers” don’t realize, says 321energy.com founder Bob Moriarty, is that “the BMWs they drive to anti-Keystone protests need fuel.” But the pipeline supporters who expect that fuel to come from American sources are just as delusional, Moriarty asserts in his scathing interview with The Energy Report. That’s why he’s looking beyond North America for lucrative oil plays. Find out which international producers may be ideally positioned to supply an energy-hungry U.S., and why Moriarty believes oil should be taxed “to the limit.”

What the “tree huggers” don’t realize, says 321energy.com founder Bob Moriarty, is that “the BMWs they drive to anti-Keystone protests need fuel.” But the pipeline supporters who expect that fuel to come from American sources are just as delusional, Moriarty asserts in his scathing interview with The Energy Report. That’s why he’s looking beyond North America for lucrative oil plays. Find out which international producers may be ideally positioned to supply an energy-hungry U.S., and why Moriarty believes oil should be taxed “to the limit.”
The Energy Report: In September 2012, you described $100/barrel (bbl) as the new normal. What market factors are behind today’s price of $93/bbl?

Bob Moriarty: If the new normal is $100/bbl in any given market, the price should be as high as $115/bbl and as low as $85/bbl. The price will continue to swing around that. Even with the Bakken coming on-line and other domestic U.S. production occurring in the U.S., cheap oil is gone.

TER: So when you look at oil consumption, do you look just at the U.S. or do you look globally? For example, what role does China play?

China is an indicator of global consumption. I am not concerned with global consumption. But if you want to measure what is happening in China, look at the spot price of copper, which is hitting new lows. China is slowing down. [See second chart below] 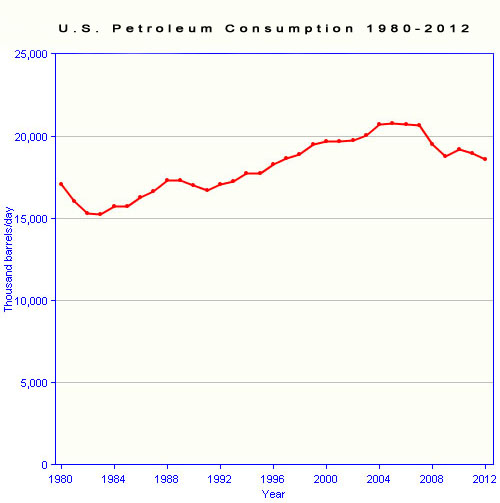 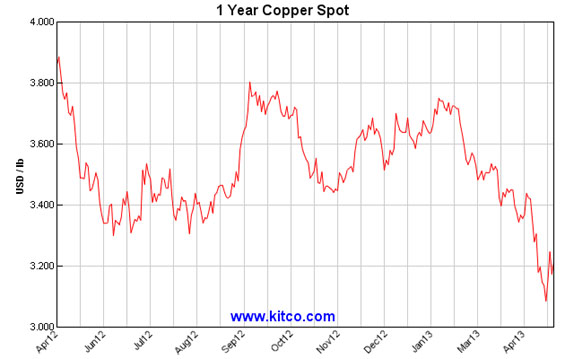 TER: Are you saying the U.S. is not in a recovery?

TER: You really are upset about the White House tours being cancelled, aren’t you?

TER: Many of the experts we interview and the Energy Information Administration say that the U.S. is on its way to being a net oil exporter by 2030. Do you agree?

BM: The idea that the U.S. is on the way to energy self-sufficiency is nothing but feel-good B.S.

TER: Is the biggest problem supply or production costs?

BM: If it costs $5 million ($5M) to drill a well, you have to sell the gas for more than $5M. Some wells in Canada have gone for 20 or 30 years and some wells in Texas go for five to 10 years. But the wells drilled in the Bakken are depleting far faster than anybody expected; they last only one to three years. When you multiply the production of a well by the number of years you expect it to produce, the numbers do not work out.

TER: In your last interview with The Energy Report, you said it would take a revolution to get the Keystone Pipeline built. Are you any more optimistic now?

BM: No. Americans are getting dumber. They need to wake up and smell the B.S. We need the Keystone pipeline; it’s good for the U.S. All these feel-good tree huggers need to realize that the BMWs they drive to the anti-Keystone rallies need fuel. All wealth is created by growing something, manufacturing something or mining something. Everything else is just a transfer of wealth. We need to do something that creates wealth, real wealth. The Keystone would create wealth.

TER: Marin Katusa said in an interview with The Energy Report that the Keystone Pipeline will be built, but that a “maple leaf tax” will be added on in the name of the environment. That tax will increase the price of the Canadian gas. Do you agree?

BM: The price of the gas does not matter. When you run out, you need more. I think Canada should charge a price that makes sense, and oil should be taxed to the limit of its ability. I would rather see taxes on oil two or three times higher than they are now. The U.S. has cheaper oil than any country that is not a big oil producer. It is foolish because we are encouraging overconsumption of a very valuable resource.

TER: If not from the U.S. or Canada, where will the energy come from?

TER: How can investors get involved in coal-bed methane?

BM: I have owned shares in CBM Asia Development Corp. (TCF:TSX.V) for four years. It has about 160M shares outstanding; 250M shares fully diluted. It has already found 1 trillion cubic feet (1 Tcf) gas. In Canada or the U.S., that 1 Tcf gas would be worth $200–500M. The company has a market cap of about $27M. It is in the middle of raising money to drill, which has driven the stock price down to $0.16. If it were operating in Canada, it would be a $500M company.

TER: What about oil? Where will our oil come from?

BM: The frontier is in the North Island of New Zealand, where TAG Oil Ltd. (TAO:TSX.V) has been enormously successful. Just last week, TAG announced spudding a 1,800 meter (1,800m) hole into shale on the east side of the North Island. That could be bigger than the Bakken.

TER: Is most of the action in New Zealand in the East Coast basin or in the Cardiff deep condensate?

BM: It has been on the west side, and that is fairly traditional oil. TAG Oil just spudded the very first hole in the East Coast basin. The results should follow in two to three weeks. If this turns into another Bakken, TAG Oil will go through the roof, along with Marauder Resources East Coast Inc. (MES:TSX.V).

TER: Marauder just closed a $1M private placement, and is exploring in that same area, correct?

BM: Correct. TAG plans to drill two wells about 200 kilometers (200km) apart. Marauder is exactly halfway between those two wells. The results at TAG’s two wells will give investors a real good idea of Marauder’s potential. When you are exploring for oil in a shale basin, you do not give a darn about drilling, as long as your next-door neighbor is drilling. Marauder is next door to TAG. [See map of TAG properties below] 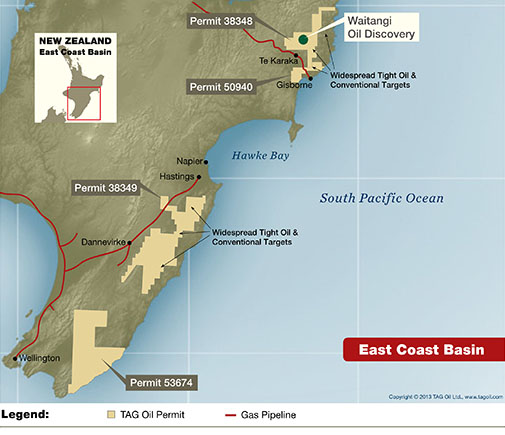 BM: If you are in Canada, you are in great shape. Canada has a lot of oil. I like a company called Aroway Energy Inc. (ARW:TSX.V; ARWJF:OTCQX). It is cheaper now than it has been in the last three years—$0.30/share. It is producing over 1,000 barrels of oil equivalent per day.

TER: It just came out with a new reserve estimate on West Hazel. Was it what you expected?

BM: It’s a really good number. The problem is trying to figure out what it is worth. Aroway has made money. It is cash flow positive. It has good management that does what it says it will do. With the market and the juniors getting creamed so badly over the past two weeks, Aroway stock has lost about one-third of its value. I expect Aroway to be $0.60–1.00 in three to six months. The current price is simply irrational.

Canada remains one of the best environments for investment. The Canadian banks are a lot saner than banks elsewhere. Taxation is not totally out of control.

TER: What is another way investors can get exposure to energy plays?

BM: One resource-related company I really like is called Synodon Inc. (SYD:TSX.V) and I do own shares in it. The company has a proprietary process that examines fumes from a gas or an oil pipeline. This is a critical issue. The infrastructure in the U.S. needs a lot of work. Oil and gas spills kill people and harm the environment every year. These guys have a process that is simply fabulous, probably ten times more cost effective than anybody else. It is a $3B a year industry. The stock price should be a lot higher than it is.

TER: Do you like energy services or producers better as a way to make money in oil and gas?

BM: Both of them are great investments. The bottom line is that it is time to be investing in something you can put your hands on. We have got this enormous $648 trillion dollars in derivatives, paper assets. They are bets and they are blowing sky high. You want to be in something real. A lot of people own bonds that they are going to end up putting on their wall as wallpaper. It is time to invest in something real.

TER: Is the current market a good entry point for getting into something real or is it too early to call a bottom?

TER: Bob, thank you. It is always a pleasure talking with you.

Want to read more Energy Report interviews like this? Sign up for our free e-newsletter, and you’ll learn when new articles have been published. To see a list of recent interviews with industry analysts and commentators, visit our Streetwise Interviews page.

2) The following companies mentioned in the interview are sponsors of The Energy Report: Aroway Energy Inc. and CBM Asia Development Corp. Streetwise Reports does not accept stock in exchange for its services or as sponsorship payment.

4) Interviews are edited for clarity. Streetwise Reports does not make editorial comments or change experts’ statements without their consent.

5) The interview does not constitute investment advice. Each reader is encouraged to consult with his or her individual financial professional and any action a reader takes as a result of information presented here is his or her own responsibility. By opening this page, each reader accepts and agrees to Streetwise Reports’ terms of use and full legal disclaimer.

6) From time to time, Streetwise Reports LLC and its directors, officers, employees or members of their families, as well as persons interviewed for articles and interviews on the site, may have a long or short position in securities mentioned and may make purchases and/or sales of those securities in the open market or otherwise.

Streetwise Reports LLC does not guarantee the accuracy or thoroughness of the information reported.

Streetwise Reports LLC receives a fee from companies that are listed on the home page in the In This Issue section. Their sponsor pages may be considered advertising for the purposes of 18 U.S.C. 1734.

Participating companies provide the logos used in The Energy Report. These logos are trademarks and are the property of the individual companies.