Controlled Thermal Resources Ltd. (CTR) is a public unlisted lithium resource and renewable energy company, developing the Hell’s Kitchen lithium and power project in Imperial Valley, California. CTR has invested eight years into the development of an integrated lithium extraction and conversion facility with a geothermal power facility on its leasehold within the Salton Sea Geothermal Field (SSGF). CTR is focused on delivering sustainably produced, battery-grade lithium products and renewable baseload power to support California’s clean energy mandates and to ensure a secure and reliable lithium supply chain in the United States. The company has headquarters in both California and Brisbane, Australia.

Globally, attitudes toward energy-related resource extraction are evolving to better reflect climate change concerns and the demand for cleaner, “greener” products. Investors are increasingly looking at jurisdictions and resource projects that are aligned with environmental and socially responsible development.

The integration of lithium extraction with renewable energy production provides further advantages to project economics and operating performance compared to stand-alone lithium facilities. In contrast to evaporation pond and open pit mining, direct lithium extraction is a closed-loop system that utilizes 100 percent renewable energy and steam for processing; takes hours, not months to produce high purity battery-grade lithium products; has a very small physical footprint and a near-zero carbon footprint; is not weather dependent; does not require off-shore processing, and operates 24 hours a day, 7 days a week.

Controlled Thermal Resources anticipates commencement of commercial production at Hell’s Kitchen in 2023. The production of geothermal power at Hell’s Kitchen provides CTR the ability to participate in California’s growing renewable energy market. In January 2020, CTR announced it had entered into a 25 year power purchase agreement (PPA) with Imperial Irrigation District (IID), the largest irrigation district in North America and the sixth-largest electrical utility in California.

CTR is seeking an equity investment of US$37 million to fund remaining project development activities up to the completion of financial close for construction of both commercial facilities.

The management team of Controlled Thermal Resources has significant project delivery experience in the mineral, chemical and renewable energy sectors, including more than a quarter-century of experience in the development and operations of large-scale geothermal energy projects in the Salton Sea region.

Over the next decade, lithium-ion batteries and energy storage systems are expected to play an increasingly significant role in providing power for transportation systems, homes, businesses, and economies worldwide.

In the United States, the Biden administration has released numerous Executive Orders and has pledged to create a ‘Clean Energy Revolution. Highlights include:

California’s Renewable Portfolio Standard calls for 50 percent clean energy by 2030 and 100 percent by 2045. To reach those goals, the National Renewable Energy Laboratory has advised the state to significantly increase the ratio of baseload geothermal power in its energy mix to ensure reliability and control costs.

Controlled Thermal Resources’ Hell’s Kitchen lithium and power project is located on the southeast shore of the world’s largest known geothermal resource, the Salton Sea Geothermal Field in Imperial Valley, California. The SSGF is a superheated brine aquifer that is situated between approximately 4,000 feet and 9,000 feet below surface level. Unlike most other geothermal fields, the SSGF is a very homogeneous, highly-mineralized resource body.

Geothermal operations have been active in this field for over 38 years with 240 wells drilled, resulting in extensive resource delineation and geothermal knowledge. The SSGF has the potential to produce up to 2,950 megawatts of clean power and upwards of 15 million tonnes of lithium.

Key transportation and utilities-based infrastructure in the region include rail to the Port of Los Angeles and other U.S. locations, major interstate highways, and access to water and grid power. 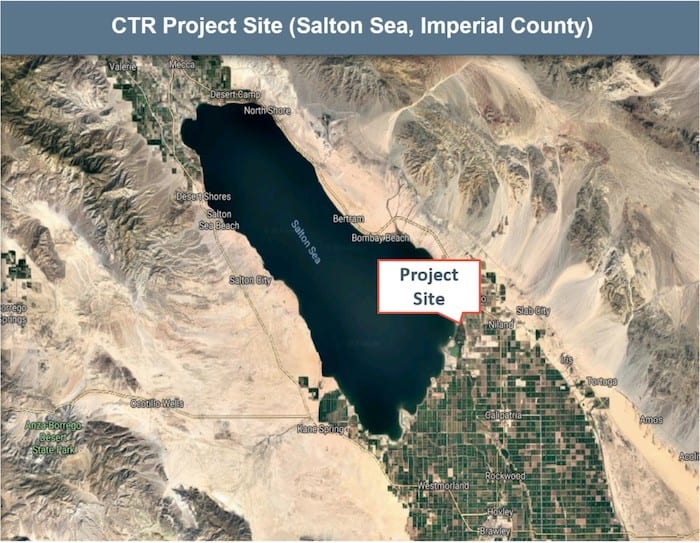 CTR’s lease agreement allows for the extraction of all minerals contained in the geothermal brine.  Additional mineral resources at Hell’s Kitchen include potassium, zinc, manganese, boron, strontium, rubidium and silica.

Direct lithium extraction is a streamlined process capable of yielding a concentrated high-purity lithium solution providing the feed for the conventional production of battery-grade lithium carbonate and hydroxide chemicals. 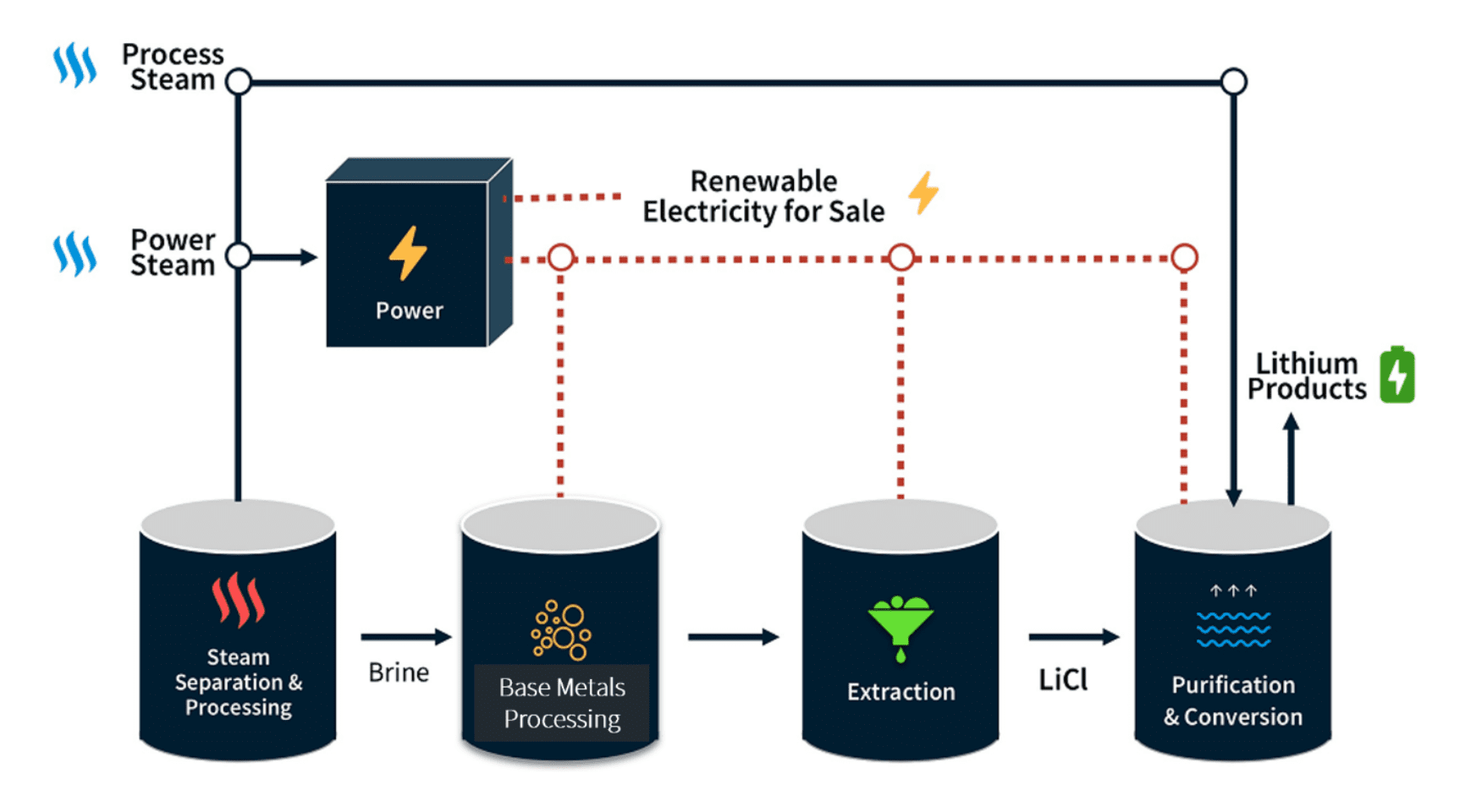 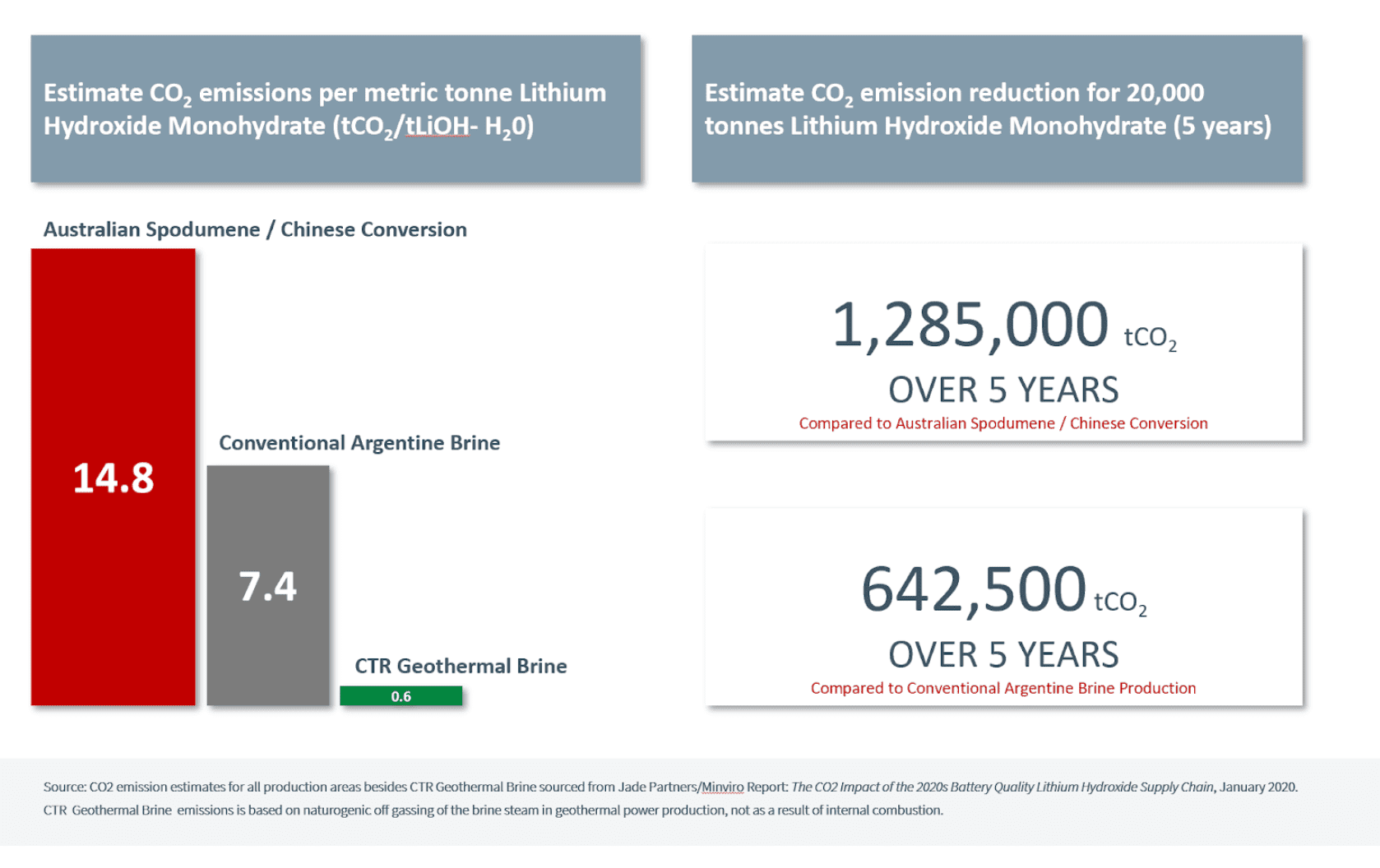 Hell’s Kitchen is expected to have a minimum 30 year life. Stage 1 of production is slated to begin in 2023, with a 20,000 tonnes per annum lithium hydroxide facility along with the generation of 49.9 megawatts of renewable energy from the integrated geothermal power plant. Additional stages will be developed according to market demand with a total resource capacity of approximately 300,000 tonnes LCE per annum and 1,100MW renewable power.

Rod Colwell is a seasoned corporate executive specializing in property, geothermal, and minerals commercial development. He has driven all stages of project development including concept, feasibility, and commercial negotiations. Rod has over two decades of experience in optimizing returns on investment with an emphasis on prime site identification and asset value maximization. He has developed relationships with key stakeholders to ensure integrity, long-term growth, and project viability.

Jim Turner has over 30 years of experience in senior management roles in the renewable energy and chemical industries including 25+ years developing and operating geothermal plants at the Salton Sea. He served as Vice-President and General Manager at CalEnergy (now Berkshire Hathaway Energy). His prior roles include Sr. Vice-President of Operations at AltaRock Energy and Sr. Vice-President of Business Development at EnergySource. His early career was with The Dow Chemical Company in engineering and technology management, and environmental business development. Jim holds a Bachelor of Science degree in Physics from Texas A&M University.

Disclaimer: Controlled Thermal Resources is a Public Unlisted Company. Opportunities to invest is restricted to Institutional and Accredited/Sophisticated investors only. To be eligible for investment you must satisfy the defined classification as set out by applicable regulatory authorities such as the SEC (US Securities and Exchange Commission) and ASIC (Australian Securities & Investments Commission). Interested Parties will be required to sign a Non-disclosure agreement (NDA).  Interested Parties may request an investor kit or contact CTR for further information.

The information contained here is for information purposes only and is not to be construed as an offer or solicitation for the sale or purchase of securities. Readers should conduct their own research for all information publicly available concerning the company. Prior to making any investment decision, it is recommended that readers consult directly with Controlled Thermal Resources Ltd and seek advice from a qualified investment advisor.