Can Europe become a leading region for battery manufacturing to supply the growing needs of its EV market? Read on to see what experts had to say.

Over the past year, Europe has taken over China’s top spot as a growing electric vehicle (EV) market, and the outlook for 2021 also looking bright.

If one thing is clear, it’s that the EV space will require batteries. To meet that demand, megafactory capacity plans are being put in place at a rapid pace.

Here the Investing News Network (INN) takes a deeper look at how Europe is positioning itself as a leading region for battery manufacturing to supply the growing needs of the EV sector.

Battery megafactories in Europe: State of the play

With the help of government incentives and tougher emissions regulations, the EV sector in Europe has been expanding fast, even during the pandemic. Almost 2 million EVs were sold in 2020 as traditional carmakers flooded the market with plans to electrify their fleets sometime in the next decade.

The region has started taking steps to strengthen its EV supply chain to reduce costs and to improve security, among other reasons. That’s why it comes as no surprise that Europe is pushing to develop its battery megafactory capacity.

“(This) has been driven not only by cell companies wanting to locate close to large European automakers, but also policy at the country and regional level to build a local lithium-ion economy.”

When looking at the battery manufacturing industry, Srinath Rengarajan of Oliver Wyman told INN the biggest opportunity for Europe in this space is that there’s actual local demand.

“There’s a lot of complexity involved in the production of battery cells and battery packs — it’s not easy, and there will be a lot of challenges along the way,” he said. “That’s why it’s very important to have battery production domestically in every region where there are EVs being sold.”

According to Roskill data, Europe accounted for around 6 percent of global lithium-ion battery cell capacity in 2020.

Most capacity in Europe is currently owned by large players. Among others, LG Chem (OTC Pink:LGCLF,KRX:003550), CATL (SZSE:300750), SK Innovation (KRX:096770), Samsung SDI (OTC Pink:SSDIY,KRX:006400) and Envision AESC all have plants in Europe that are operating or in construction.

But Europe also has a number of newer operators hoping to enter the market with plants that are either in construction or in the planning phases, Rawles pointed out.

“Primarily in the near term this would be Northvolt in Sweden, but there are several other companies looking to develop large (>30 GWh) plants,” he said. “These are newer and therefore smaller companies, but we may see them achieve success in the coming years.”

However, as a global general trend, Benchmark Mineral Intelligence is expecting to see consolidation across the battery supply chain going forward.

“Benchmark is tracking more than 100 cell companies globally. As completion grows, we expect this number to dwindle, particularly in China,” Rawles said.

Europe’s plan to increase its battery megafactories means that the environment will become more competitive — this will be one of the main challenges the region faces going forward.

At the end of 2018, Benchmark Mineral Intelligence was tracking eight planned plants in Europe over the coming decade; by the end of March 2021, this number had increased to 21 plants.

“The majority of that capacity will be from Tier 1 cell producers, which are already supplying European automakers,” Rawles explained to INN. For Benchmark Mineral Intelligence, a Tier 1 battery producer refers to a company qualified to supply multinational EV producers outside of China.

“These Tier 1 players are not going to give up market share easily, making it challenging for a new entrant to break into the market. But in many ways this is true in other regions too,” he noted.

Further to this, Rawles added that recent vertical integration strategies by automakers like Tesla (NASDAQ:TSLA) and Volkswagen (VW) (OTC Pink:VLKAF,FWB:VOW) may see cell supply to some extent brought in house, reducing the need for a larger pool of outside suppliers.

Tesla is on track to open its first Gigafactory in Europe in 2021, where the US company will produce EVs and is set to turn into the ‘world’s largest EV battery plant’. For its part, VW recently said at its Power Day that it plans to build six battery factories in Europe, each with a capacity of 40 GWh by 2030.

Conversations about building local EV supply chains have picked up pace in the past year as tensions between China and the US escalated and the pandemic put their resilience to the test.

When thinking about shorter supply chains, building battery megafactories in the European region is a move that makes sense.

One thing that it is important to keep in mind is that the location and ownership of battery megafactories is different than operation. The majority of current and future European cell capacity is owned/operated by non-European entities, primarily Chinese and Korean cell makers.

“To date, one of the five operational GWh-scale plants in Europe is operated by a European company, although that is set to change with Northvolt expected to start production in late 2021,” Rawles said.

By 2030, Benchmark Mineral Intelligence expects to see 35 percent of regional capacity being operated by Europe-based companies under current plans.

“That’s as opposed to 2 percent today, so we do see European companies playing a growing part in cell production,” he added. “The recent addition of cell plants announced by VW on its Power Day has helped to boost the outlook — but certainly there is lots of further interest in adding capacity in Europe from domestic enterprises.”

However, this will not be without challenges as competition heats up alongside extensive requirements in research and development to stay at the frontline of technology in the market, Rawles said.

When looking at the buildout of its lithium-ion supply chain, Europe not only has to consider its battery cell capacity, but also must pay attention to battery components — namely anodes and cathodes. 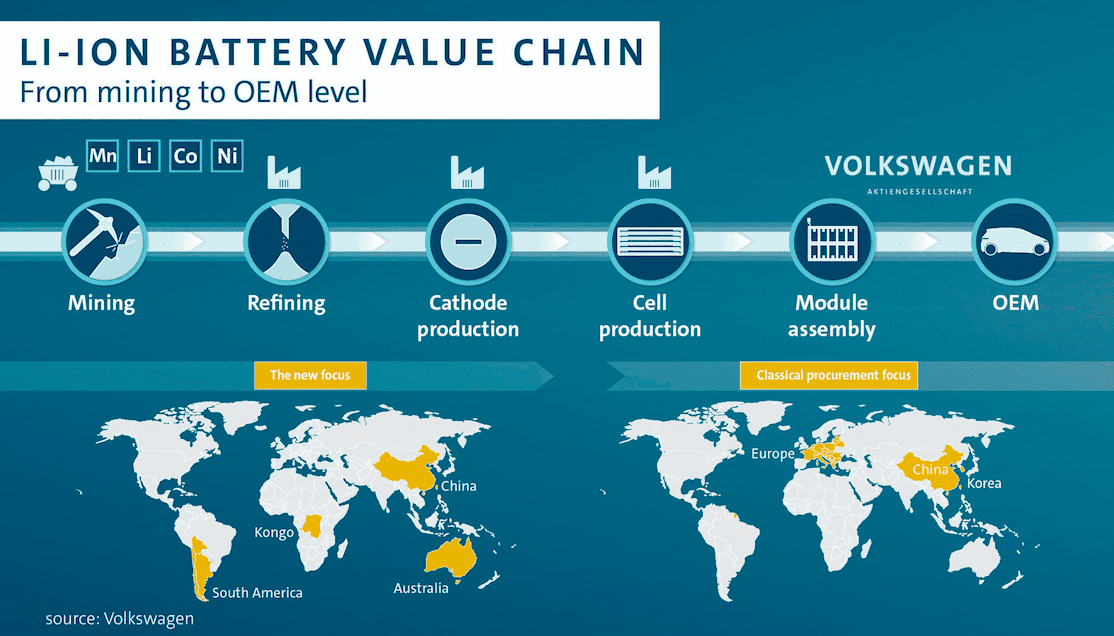 “Current plans in the pipeline for Europe mean it will only have enough cathode capacity by 2030 to supply 4 percent of its needs; for anode this is just 2 percent,” Rawles said.

Roskill’s Shang also said that despite Europe’s fast-expanding capacity for lithium-ion battery production, its cathode materials production capacity is struggling to keep up.

More production in the region is expected, but Roskill’s analysis shows that by 2025, Europe will still have to import 56 percent of the cathode materials used for lithium-ion battery production from East Asian countries like China and South Korea.

“This would create significant space for localized production of cathode materials in Europe,” Shang said.

Speaking about the challenges related to this part of the supply chain, Rawles said there are relatively few risks currently as the region needs the capacity.

“The main challenge is competing with lower-cost material from Asia, particularly China,” he added.

Shang pointed out that the cathode business is capital intensive, but margins are modest. “Coupled with a long-time investment frame, this creates a headwind for cathode production expansion,” he added.

The analyst also highlighted the fact that cathode production is not an equipment business.

“New entrants need years of experience to output high-quality cathode materials products, especially for safety-critical automotive applications,” he said. “In addition, a localized supply chain of raw materials needs to be built up to achieve a European cathode strategy.”

Cell capacity in Europe is heavily focused on supplying the EV market.

According to Benchmark Mineral Intelligence, the majority of capacity is forecast to be centered on nickel-containing chemistries, primarily nickel-cobalt-manganese (NCM), shifting towards NCM 811 in the coming years from the current NCM 523/622 base.

“The growth ranges between 10 to 25 times roughly,” Rawles said.

“This is well ahead of the global average of 10 to 15 times demand growth, meaning demand in Europe will outpace other global regions, in part due to large ongoing investment in battery production capacity in the block, and a lower starting base.”

“This is becoming increasingly challenging with tightening markets, rising prices and more material getting locked up in long-term supply agreements by incumbents,” he added.

Some examples seen in the lithium space include VW striking a deal with top producer Ganfeng Lithium (OTC Pink:GNENF,SZSE:002460), BMW’s (ETR:BMW) recently announced deal with Livent (NYSE:LTHM) and Tesla saying it plans to extract its own lithium from clay in Nevada in the future.

Speaking with INN about battery chemistries used in Europe’s megafactories, Egor Prokhodtsev of Roskill said the industry is moving towards nickel-rich chemistries within ternary cathodes, and the recent development of lithium-iron–phosphate chemistry is keeping its competitive advantage.

“Recent announcements from VW and Tesla are suggesting more manganese-intense cathode chemistries for volume production,” he said. “We think this trend, along with blended cathodes, will define the future chemistries landscape.”

Steady sourcing and processing of raw materials locally to meet quality, performance and sustainability requirements could be a potential hurdle for megafactory buildout in Europe, Shang said.

Battery megafactories in Europe: What to watch

For battery metals investors interested in what’s ahead for the European region, there are a few factors to consider when looking at battery megafactories specifically.

“Don’t underestimate the challenges for cell producers to ramp production at more than 20 GWh cell plants, and the timeline this typically takes,” Rawles said. “It can take longer to ramp a battery plant to capacity than it takes to build it.”

Rawles also explained that not all cells are created equal.

“It is extremely challenging for Tier 2 or 3 cell producers or new market entrants to qualify and maintain the quality standards needed for the global EV supply chain,” he said. “Therefore, whilst there is lots of pipeline capacity, not all of it is of the standard required to supply the EV market.”

Another area to watch is sustainability, which is already significant. This is currently primarily over power supply — it’s critical now for a new cell plant to use 100 percent renewable energy in its cell production.

“It’s also important as part of the European supply chain that the cell producers can source some of their feed of battery chemicals from recycled sources,” Rawles said. “The EU is imposing recycling content minimum requirements from the mid-2020s, and being able to source this material will be a requirement for future production.”

Commenting on sustainability, Dominic Wells of Roskill also said Europe benefits more than most nations from higher-than-average use of renewable energy resources.

For the analyst, environmental, social and governance challenges faced by European megafactories will be predominantly in the sourcing of battery materials as opposed to the manufacturing process itself.

“Battery raw material industries are facing concerns from the downstream market over the sustainability of their supply chains,” he said. “To combat this, EV and battery manufacturers are taking steps to improve transparency in their supply chains via responsible sourcing initiatives, and raw material producers are becoming more proactive with disclosing details of CO2 emissions, environmental incidents and other aspects of their operations.”