In this interview with Peter Epstein, lithium expert Joe Lowry talks about stocks and current supply and demand dynamics.

This is my 4th interview of “Mr. Lithium,” Joe Lowry. Do people still call him that? Following Joe’s advice by paying a pretty penny for his consulting services, or following him for free on Twitter and Linked-In, is one of the absolute best ways to stay on top of the lithium sector. Although Joe does not give investment advice, he sometimes issues PSAs, “public service announcements,” warning followers to be careful not to believe everything they read or hear about lithium juniors! {ask him what he thinks of the dozens of Li juniors heavily focused on projects in Nevada …. actually, don’t} 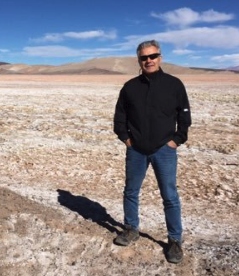 Still, reading between the lines, it’s been clear which names he has liked over the months and years. Lithium Americas (TSX: LAC) and SQM (NYSE: SQM) are prime examples. It’s truly worth one’s time to follow Joe. Consider that LAC shares have more than doubled from an early July low of C$0.78 (it closed at C$1.70 on September 15th) when rumblings suggested that SQM might not move forward on the LAC/SQM Cauchari-Olaroz project. Joe was among the first to squash those rumors, setting up what turned out to be a highly profitable buying opportunity. SQM is up 120% in the past 12 months (by comparison, the Global X Lithium ETF is up 54%, and the S&P 500 Index 16%)
Another key takeaway from reading Joe’s real-time accounts of the lithium industry is that things happen, a lot of things, away from the U.S. & Canada! And, it’s not all about south America’s, “Lithium Triangle” either. China is incredibly important and Australia is a long-time and growing hotspot for hard rock Li mining. Joe has mentioned Chinese & Australian-listed companies that have also had tremendous performance over the past year, Ganfeng Lithium (SHE:002460) + 208% and Tianqi Lithium (SHE:002466) + 97%.
Joe is a fan of Australian-listed Galaxy Resources (ASX: GXY), a company a hard-rock operation in production in Australia, a world-class brine development project (Sal de Vida) in Argentina that has a Bank Feasibility Study on it, and a promising exploration project in Quebec, Canada near Nemaska’s (TSX: NMX) Whabouchi project. GXY is up 60% in just the past 3 months.
Reading my prior 3 interviews of Joe in preparation for this one was quite interesting. Consider what he said in June 2015,

“There’s already significant tightness in the upstream market (both carbonate & hydroxide) that will build over the next 24 months resulting in a significant price rise.” 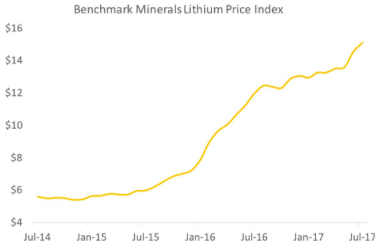 Notice what happened around June, 2015? I always learn a lot from interviewing Mr. Lithium, this time was no different. Please enjoy this latest masterpiece, my fourth, and view links to previous interviews at the bottom of the page. NOTE {I have no prior or existing financial relationship with Joe Lowry or any of his business interests}
What has been the biggest change in your view of either demand or supply for the next 5 or 10 years?

Since mid-year when I have been asked to speak on lithium supply & demand, I say the following, ‘all the positive surprises have been on the demand side and the negative surprises on the supply side.’ I do a lot of expert consultant calls on the subject of lithium. These calls no longer dwell on the topic of demand — investors seem to recognize that electric transportation demand is real and significant. 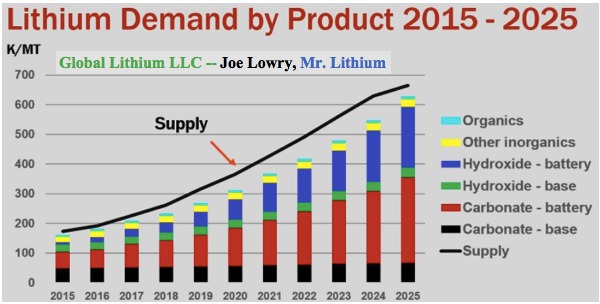 The question now is more about speed of EV implementation. On supply, it has been great to see LAC, Pilbara Minerals (ASX: PLS) & Altura Mining (ASX: AJM) get funding, but the continued issues with Albemarle’s (NYSE:ALB) La Negra II expansion, and Orocobre (ASX: ORE) ramping up to phase 1 capacity of 17,500 tonnes/yr. of lithium carbonate, are further evidence that lithium projects take time and have considerable execution risk.
While most agree with you & Simon Moores that Li prices will remain at or above $10-12k/tonne for years to come, what event(s) could cause prices to fall below $10k/tonne?
Oversupply, which isn’t likely to happen. Also, the global average cost of production is creeping up each year. Even Albemarle in the Atacama salar in Chile has significantly higher cash costs after agreeing to a new royalty regime this year.
What is the most important lithium industry topic that investors are not talking about?
The biggest issue with the retail investor is falling love with a company because its stock price is up, even if the company’s project is poor or marginal.
On the institutional side, many are asking the wrong questions and accepting what some major banks say, that is, in many cases, simply poor quality analysis. I have done calls with hedge funds and institutions that were only willing to look at ALB for a lithium investment. Juniors were not on the table for them because of their size or the exchange they are traded on. I always said to buy SQM, but would get some response about the CORFO issue. Look at the missed opportunity (up 120% in the past year).
Are you receiving more calls from investment fund managers lately? At what point on the investment spectrum are we on in terms of boom-bust / fear-greed, bubble / pop?
Since 2015, the rate I charge for expert consulting calls has tripled, while at the same time, the volume of calls coming in has also tripled. I say we are in, ‘lithium’s 15 minutes of fame‘ which may turn into a 15-year ‘super cycle.’ 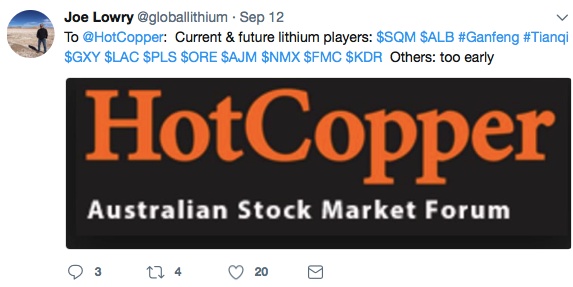 Companies you’ve spoken favorably on, companies like Tianqi, Ganfeng, SQM, and Lithium Americas are up between 87% & 208% in the past year. Can large lithium companies continue to vastly outperform market indices?
First, let me clarify, Tianqi should be at the end, not the beginning of that list. They have great assets but are not great operators like SQM & Ganfeng. In this cycle I bought SQM at $15/shr. and bought more shares up to $20. It’s at $58 as we speak. I started buying shares ofLAC the week of the SQM JV deal in March of 2016. I was public about this only to prove that I, ‘eat my own cooking.’ At this point in the cycle, SQM may be approaching full valuation, but in my opinion LAC is still significantly undervalued and has a lot of room to run.
NOTE: {Howard Klein of RK Equity has excellent commentary on the perceived under-valuation of LAC, and a few other names. He publishes the Lithium-ion Bull newsletter. Twitter: @HowardKlein10}
China’s announcement to ban gas & diesel cars is hardly a surprise, yet the market seems to have been blown away by this news. In what year do you think China will start phasing out ICE-powered vehicles?
Much of my business is directly tied to what happens in China. My opinion is that this announcement is both aspirational and significant. I take it as more of an indication that near-term policy decisions will support e-transportation & ESS growth. But, we could easily be talking five years from now about when China is going to turn that pronouncement into reality. 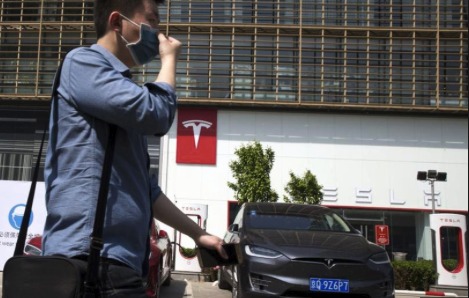 There are > 20 juniors with at least 1 owned or optioned Li brine property in Argentina. Lacking large sums of capital, some are planning to pump brine into evaporation ponds, then ship a 1%-2% Li concentrate to a larger player for processing. Is that a business model that could work?
This idea sounds good, but would be difficult to implement. Most brine assets have significant variations. Salars are dynamic — it’s not just about, ‘pumping brine into ponds‘; expertise is required to manage the mix of brines. This is true on the world’s best brine resource in Chile and wouldn’t be any easier with combined mediocre assets. Blending brines from several salars will increase processing complexity significantly. It may look good on a, ‘white board‘ and make for a good story for investors who don’t understand how lithium processing works, but I’m skeptical to say the least.
You comment periodically about FMC Corp., Albemarle & SQM. Please summarize your views on each.
SQM only fairly recently decided to go ‘all-in’ on lithium, as evidenced by the LAC and Kidman Resources (ASX:KDR) deals and their expansion in Chile. SQM is now the, ‘lithium superpower.’ Yes, they still have to work out issues with CORFO, but the Chilean government does not want to kill the golden goose.
Albemarle has great assets, but are, at best, mediocre operators. They have a very poor record of executing on capital projects. Their announcement on September 15th about new technology was a typical PR move, but likely lacks substance — they highlighted a technology that even they say is not ready for commercial use. ALB has issues with their brine operation that are starting to be recognized based on their limited output vs. SQM. In one sentence; ALB is a company run by a lawyer trying to compete in a world where operations are key. 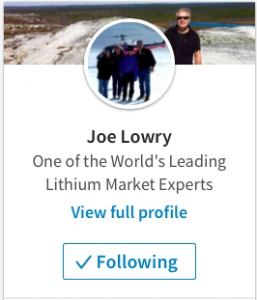 FMC Corp. (NYSE: FMC) has allowed their franchise to atrophy by not investing in resource capacity. They have a very good, but small upstream operation in Argentina. They have a very old processing plant in North Carolina, and an old downstream plant in the UK. Their newly announced tolling operation is what I have called a ‘House of Cards‘ — your readers can find my posts on Linked-In. From a top 3 producer in years past, FMC will be #6 globally in LCE production in 2018.
Joe, I notice that you mention a company named Nano One, ticker NNO.v from time to time. What can you tell us about that company?
Nano One Materials (TSX-V: NNO) has an extremely interesting technology. The primary focus is to lower the cost of producing cathode by eliminating process steps. In addition, Nano’s process may enable the use of non ‘battery-grade‘ lithium materials in cathode production. Another benefit of the process is the ability to use lithium carbonate to produce high nickel compounds such as NCA that currently require lithium hydroxide.
SQM has operations or projects in Chile, Argentina & Australia. It’s been reported that they’re looking for a fourth jurisdiction to operate in. Any thoughts on where they are looking?
I have very clear thoughts on this, but I will keep them to myself. Clearly SQM is now “all-in” on lithium and part of what I call the, ‘Lithium Star Alliance‘ along with LAC, Ganfeng, Kidman & PLS (via Ganfeng’s interest)
You & Simon Moores say that the lithium supply chain is in need of funding from additional sources, presumably battery makers & EV manufacturers. Has there been any evidence of this yet?
Absolutely, there is evidence, but valuation is a major issue. I am speaking with interested parties across the supply chain (from cathode to car makers). The problem is that car and battery companies want to negotiate from strength and tend to be bullies when dealing with their suppliers. They are trying to price shop in a seller’s market. It will take time for them to realize the reality of the lithium market — lithium suppliers are in the driver’s seat.
Thanks Joe, very good stuff, as always. Great catching up with you!