What nickel trends drove prices in 2018? We run through top supply, demand and price catalysts in this overview of the space.

In 2018, the nickel story was one of increased interest in its use as a battery component, along with anxiety over supply mixed with trade war jitters.

From the start of 2018 through to now, nickel has had as bumpy a ride as other base metals, but with a peak well above its starting value in the middle of the year.

A yearly high of US$15,745 was hit during that period, but from July 1 onward it was a downward journey as nickel lost 25 percent of its value between the midpoint of 2018 and late December. 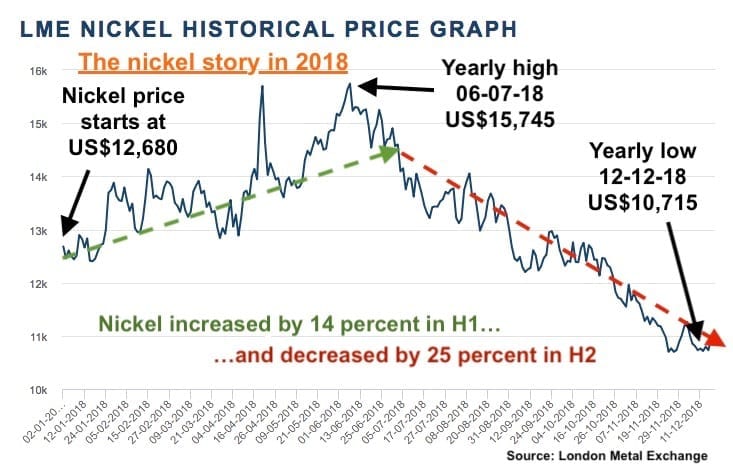 Nickel trends Q1: Prices on the up

The year began with the news that Chinese company Jinchuan Group (HKEX:2362) would be expanding production of nickel sulfate by 40 percent in a move to position itself to take advantage of the coming electric vehicle (EV) boom.

Canadian miner RNC Minerals (TSX:RNX) was on the same wavelength, announcing plans to build what it is calling the largest nickel-cobalt project in 2019  — news that brought the company a 47-percent increase in its share price on the TSX.

Cobalt 27 Capital (TSXV:KBLT) soon after signed a royalty deal for nickel and cobalt production from the project. RNC President and CEO Mark Selby said in March that even without the EV demand driver, nickel fundamentals were strong.

Supply tightness and increased demand were behind a surge in value during the quarter, with market analysts at the time predicting the increase would be maintained in the near term.

The increased value did not last long though; shortly afterwards there was a fall in price as volatile markets and a stronger greenback took their toll in early February.

In Q2, with nickel prices maintaining a steady upward trend, Glencore (LSE:GLEN) announced it would be spending US$1 billion to hunt for more nickel ore near its Sudbury operations in Canada.

Around the world in Q2 the nickel story was one of pressure, from the Philippines to Cuba to New Caledonia.

In the Philippines, Rodrigo Duterte, the Asia-Pacific nickel powerhouse’s firey president, started banging on about how much he hates mining, threatening to ban open-pit mining in the country due to environmental infractions. It was a theme he would repeat at regular intervals through 2018.

Meanwhile, in the Caribbean, Cuba set itself a nickel-cobalt production target of 50,000 tonnes in 2018 after — according to business sources close to the industry — failing to hit its 2017 targets.

On the other side of the world in New Caledonia, Vale (NYSE:VALE) continued pulling its hair out over its troublesome VNC nickel complex there; at the time, the company was searching for a joint venture partner to work with. VNC posted good numbers in Q1, but has been a headache for Vale since it opened (late) in 2010.

In 2017, it was reported that Vale would mothball the complex if it didn’t find a partner by the end of Q2 2018 — something that did not come to pass.

To salt the wounds, Moody’s Investor Service announced in May that the mining industry wasn’t doing enough to keep up with EV demand, and prices kept rising as demand outstripped supply.

All this, while increased discussion around the importance of nickel in EV batteries began taking shape.

Despite angst over VNC, Vale still pulled the trigger on its Voisey’s Bay nickel-cobalt expansion in Canada.

Nickel trends Q3: Boom in the land down under

First up, miners in the Philippines warned that Duterte’s antics and decreasing prices would impact output for the remainder of the year; later in the quarter Manila announced a mild loosening of mining rules to allow exploration.

Meanwhile, Mincor Resources (ASX:MCR) flaunted an increased mineral resource at its Cassini project in Western Australia, and GME Resources (ASX:GME) was another company going for the battery spin, releasing a prefeasibility study for its NiWest project.

And don’t forget Australian companies barging into neighboring markets, with Axiom Mining (ASX:AVQ) acquiring a mining lease for the San Jorge deposit, and Metminco (ASX:MNC) revealing plans to snap up the Jejovo project — both nickel projects in the Solomon Islands.

Not to be outdone, mining behemoth BHP (ASX:BHP,NYSE:BHP,LSE:BLT) revealed that it has zero plans to be left out of any ongoing or future nickel boom, announcing intentions to build a slew of mines and refining projects to underpin a major push into the EV space through its Nickel West division.

Q4 begun with more nickel development news out of Australia, with Western Australia turning out to be quite the hot spot for the metal.

Over in Queensland, Townsville looks set to become home to yet another nickel refinery after Pure Minerals (ASX:PM1) announced plans to take over a private company that already had big plans. Combined with Pure Minerals’ ore agreements from miners in New Caledonia, 25,000 tonnes of new nickel could come onto the market thanks to the plans.

Western Areas announced it is pulling the trigger on its Odysseus mine in Western Australia, banking on the project coming online as demand for the metal increases (and with that, prices).

Brazil saw developments too, with Horizonte Minerals’ (TSX:HZM) Araguaia project set to double with a second-phase expansion announced by the company in a review, while Centaurus (ASX:CTM) inked itself a deal that completely de-risks the exploration and evaluation stage of its Itapitanga project.

Vale popped up in the news again, this time with protests over pollution halting operations at its Onça Puma mine.

In what could be seen as good news for miners in New Caledonia, voters in the French Territory voted to remain with France in a nail-biting referendum, meaning no need to renegotiate mining leases.

Nickel prices kept sliding through the quarter, with analysts predicting that markets should get used to market volatility (and depressed sentiments) at least until the 2020 elections in the US — if not beyond.