Copper was hit the hardest with the news that manufacturing activity in China has slowed to its lowest level in six months. 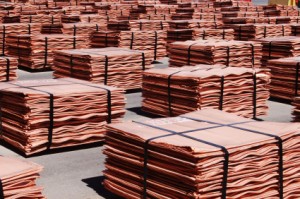 Copper futures were down to their lowest level in a month today after Thursday’s weak manufacturing data from China and the United States inspired doubts that demand for the red metal is going to rise.

Copper for March delivery on the London Metal Exchange is changing hands at $7,199 per metric ton, down from Thursday’s close of $7,292. Urged on by HSBC’s China manufacturing purchasing managers’ index (PMI), which recently indicated a slowdown in industrial activity for the first time in six months, the red metal touched a one-month low on Thursday, reaching $7,185.

Meanwhile, in New York, copper for March delivery was little changed this morning, trading at $3.2845 a pound on the COMEX. The red metal touched $3.275, its lowest since December 19. Overall, copper prices are down 1.8 percent this week.

“Copper was hit hard following the downbeat news on the Chinese economy,” Jens Naervig Pedersen, an analyst at Danske Bank in Copenhagen, said in a note. “Markets will have to factor in weaker Chinese demand.”

In the United States, copper has been up against a strengthening dollar. The greenback has been on short winning streak, posting gains in four out of five sessions against a 10-currency basket, Bloomberg reported. Boosting the greenback’s confidence this week was further speculation that the Federal Reserve will opt for a meeting next week to reduce the economic stimulus program in the United States.

US economic stimulus reductions combined with weak growth out of China have put investors on edge.

Speaking with Reuters, Aslam explained that “[t]here is nothing positive for copper at the moment,” adding that “[t]he HSBC Flash manufacturing PMI data rattled many nerves in the market.”

The forecast is in contrast to the sentiment felt at the end of 2013, when the general consensus was that copper prices would remain relatively flat. For Goldman, the forecast is down from its 2013 estimated average price for the metal, which was $7,328 per tonne, or $3.32 per pound.

Red Metal Resources (OTCBB:RMES) released the results of the drill program being undertaken by its Chilean subsidiary, Minera Polymet Limitada, on the Farellon property, the company’s copper-gold asset in Chile. The company’s intention with the program is to expand on the intercept of 3.95-percent copper and 0.53 g/t gold over 8 meters in drill hole FAR-11-001. The company completed two new drill holes totaling 16 meters, FAR-13-001 and 002; they were drilled 25 meters along strike and were aimed at aiding in identifying the most prospective areas on the site in order to start small-scale production.

Curis Resources (TSX:CUV) announced the results of its 2013 supplement to the Arizona State University 2012 Economic and Fiscal Benefits Study of Florence Copper Project. According to the latest results, Florence Copper stands to generate $2.1 billion in total economic activity for Pinal County, and would create and support nearly 800 jobs in Arizona for more than 25 years.

Michael McPhie, president and CEO of Curis, said in a company statement, “[t]he original ASU Study confirmed that Florence Copper will have a significant impact on the local economies ofFlorence and Pinal County, as well as a profound contribution to the economic well-being of the State by creating head of household jobs and spending hundreds of millions of dollars in supply and service contracts,” adding that the company is “pleased that the updated study shows Florence Copper will create an even stronger boost to the local and state economies than originally projected, and shows the project can bring widespread benefits for years to come.”

Top Stories This Week: Fed Meets and Gold Price Drops, US Steps Up EV Efforts
EV Infrastructure in the US the Next Challenge for a Growing Industry
What Was the Highest Price for Copper?
OPINION — Should You be Positioning for Decarbonization? Part 1