Ian Parkinson, an equity research analyst at GMP Securities, shared his views on the copper market at the 2015 AME BC Mineral Exploration Roundup. He made several interesting points regarding what’s been bringing the red metal down and shared a few factors that he sees affecting prices going forward. 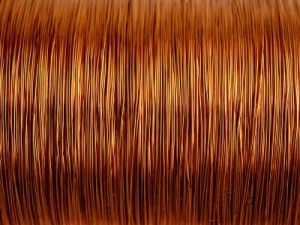 At the 2015 AME BC Mineral Exploration Roundup, Ian Parkinson, an equity research analyst at GMP Securities, shared his views on the copper market. He made several interesting points regarding what’s been bringing the red metal down and identified a few factors he sees affecting prices going forward.

To start, the analyst led with his conclusion. “I believe copper is going higher,” he said. He admitted that there are others who don’t agree with him on that front, but noted that there are fair arguments against predictions for copper to go lower.

For example, looking at technical analysis that sees copper going the way of oil, Parkinson sees a couple of problems. Case in point: some technical charts have called for copper to hit $1.40 per pound, but Parkinson believes that while such analyses can be valuable, they “do not look at the fundamentals of the underlying business.”

While oil producers used to enjoy huge margins, there’s still plenty of room for prices to come down. Not so for copper, which costs more to produce. “My view is, there is more downside in the near term for copper, but it’s going to be underpinned by this marginal cost,” said Parkinson, stating that while the red metal could fall another 20 cents in the near term, he sees the bottom coming either this quarter or early next quarter.

Dipping into the demand side of things, he stated that emerging markets in China and India “are still very, very strong in our view and are still going to be major drivers in the near term.” While he noted that the emerging markets have underperformed the broader market in recent years, he sees renewed optimism on the horizon and suggested that long-term potential growth in emerging markets will help drive long-term demand for copper.

Parkinson also anticipates the oil price helping out, since less money spent on oil means more money for other items. “Hopefully it’s lots and lots of copper,” he said.

Still, in the near term, Parkinson believes a surplus is on the horizon. “Copper is going to be in a modest to moderate oversupply situation for the next two years,” he stated.

That said, he also noted that what’s forecasted is a 200,000- to 250,000-tonne surplus for a 20-million-tonne-per-year market in an industry that “has a tendency to over promise and under deliver when it comes to production.” In that light, he added that it’s important to take the forecasted surplus with a “grain of salt.”

To give a few examples, he pointed out that Barrick Gold’s (TSX:ABX,NYSE:ABX) Lumwana mine in Zambia is set to close on the back of a new 20-percent royalty, adding that “the longer-term impacts of that will be negative for copper production in the country.” There have also been talks of a strike at KGHM’s (WSE:KGH) Sierra Gorda mine in Chile.

Furthermore, as others have noted, exploration spending has “all but dried up,” meaning that quality projects still are not getting the financing they need to come into production.

“Medium term, we see a return to a deficit in the copper market in 2017, 2018,” said Parkinson, “and unless … there’s a window to finance a lot of these projects, that deficit will remain intact for quite awhile.” Beyond that, looking at real sustaining capital costs to pay back construction costs for building a mine, he concluded that “the current spot price does not build a mine. It does not keep current mines operating,” and that “longer term, [the] industry still needs a massive recovery in the copper price” to develop projects.

In closing, Parkinson stated that GMP’s long-term copper price forecast $2.85 — a bit lower than what most market watchers would like. However, there is a caveat: “with that, we looked at existing projects we have in our project database, [and] 43 percent of those projects are underwater at $2.85 long-term copper,” he said. Certainly, it doesn’t look like $2.85 copper would be sustainable in that light.

“So again, the copper price, in my view, definitely needs to move higher,” said Parkinson.

Did you miss our copper videos from the recent 2015 Vancouver Resource Investment Conference? Check them out here: