The electric car revolution has market participants focused on lithium, cobalt and graphite, all of which are key components of lithium-ion batteries. But how much will increasing demand for electric vehicles (EVs) impact copper prices?
According to Ivan Glasenberg, CEO of Glencore (LSE:GLEN), the world’s third-largest producer of copper, the rise of EVs will significantly boost demand for lithium, as well as other metals like copper, in the coming decades.
Why? EVs require more copper wiring than standard internal combustion engines. In fact, while conventional cars typically contain about 20 kilograms of copper, for EVs the copper load is about three to four times that amount.
And according to Glasenberg, copper demand from the EV sector could increase soon. He told investors at an industry conference in Barcelona on Tuesday (May 15) that “the electric vehicle revolution is happening and its impact is likely to be felt faster than expected.”

Grab Your Report
Glasenberg is not the only one who is optimistic about the impact of EVs on future copper demand. Last year, Jean-Sebastien Jacques, CEO of global mining group Rio Tinto (ASX:RIO,LSE:RIO,NYSE:RIO), another major copper producer, said he expects demand for copper to rise as EVs take a growing share of the market.
“With 90 or more kilos of copper used in a full electric vehicle — three to four times more copper than used in a gas-powered car — it is clear to see the positive impact the use of electric vehicles could have on copper demand,” he said.
Similarly, BHP’s (ASX:BHP,LSE:BLT,NYSE:BHP) Huw McKay, vice president of market analysis and economics, has called for a big boost in copper demand from the EV sector.
“Building the EV fleet will use about 11 million tonnes of copper. Subtract the amount that would have been used in the conventional vehicles ‘displaced’ by EVs, and that figure comes down to about 8.5 million tonnes of genuine new demand — equivalent to more than a third of total global copper demand today,” he commented recently.
Electric cars currently make up about 1 percent of new global vehicle sales, but should account for over 35 percent of sales by 2040, according to Bloomberg New Energy Finance. 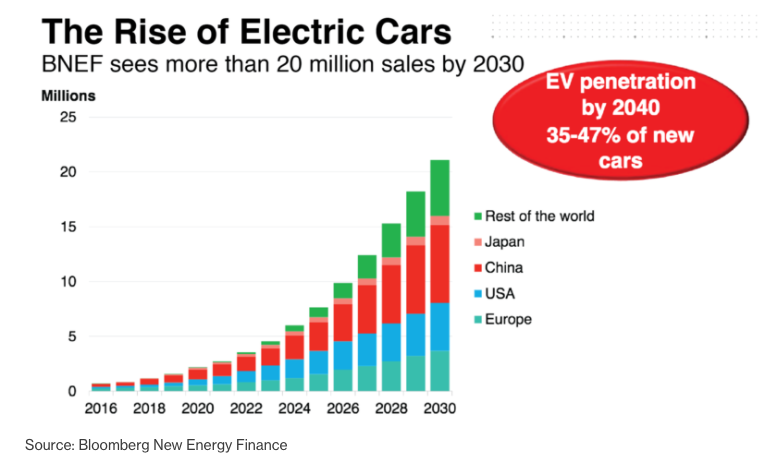 Chart via Bloomberg.
In Europe, sales of alternative-fuel models, such as fully electric cars and hybrid vehicles, jumped 36 percent in the first quarter of 2017, to 235,438 vehicles, according to the European Automobile Manufacturers’ Association.
While that’s impressive, the biggest increase in EV demand will come from China, says a report from Germany’s University of Duisberg-Essen’s Center for Automotive Research.
“As early as 2020, we expect annual sales of 4 million of new electric cars in China. The state-planned electric car quotas will give important impetus. However market share will accelerate from 2020 and as a result, we predict a 30 percent market share of new electric vehicles in China by 2025,” the report states.
There’s no doubt that the EV boom is already on its way, and together with metals such as lithium, cobalt and graphite, copper seems to have a bright future ahead.
Don’t forget to follow us @INN_Resource for real-time news updates.
Securities Disclosure: I, Priscila Barrera, hold no direct investment interest in any company mentioned in this article.