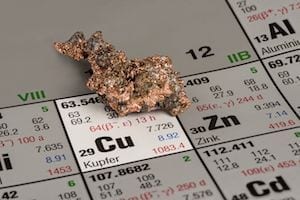 Copper’s critical uses make it the most precious of the base metals. Its important role in technological advancements will fuel strong demand.

Copper is the king base metal. From electrical wiring and plumbing to communications technologies and electronics, copper is key for a range of applications.

Dubbed “Dr. Copper,” the red metal’s broad range of applications across most sectors of the economy means the status of copper demand is often viewed as the most reliable gauge of the current and future health of the world’s economy.

Copper had a good run in 2017, despite a few bumps in the road. It closed out the year up 39 percent to reach a four-year high of $7,259 per tonne. What’s in store for the red metal in 2018? Overall, analysts and CEOs are cautiously optimistic that the same factors that supported prices in 2017 will carry forward in the short term. In the long term, copper’s important role in the technological advancements of the next decade will fuel strong demand.

“Sustained growth in copper demand is expected to continue because copper is essential to economic activity and even more so to the modern technological society,” says the International Copper Study Group (ICSG) in a recent copper market forecast. “Improvement is anticipated for the world economy for 2017 and 2018 which, although modest, should support copper demand growth.”

Key factors in the copper market

Investors who know which factors will have the most influence on the copper market over the short to long term will be better positioned to take advantage of the commodity’s wealth-generating potential.

“There are three major factors driving today’s copper market,” said Dr. James Culver, a 40-year veteran of the commodities markets. He is former chief economist for the Commodity Futures Trading Commission and is now president and CEO of VVC Exploration (TSXV:VVC), which operates a feasibility-stage copper project in Chihuahua, Mexico.

“The first factor is that the world economies, including in the US and in Europe, are actually perking along rather well. Yes, the Chinese economy is not as robust as it has been in the past, but it is still growing at an annual rate of 6 or 7 percent,” Culver told the Investing News Network (INN). “The second factor is that as technology evolves so do the primary uses of copper, and the electric vehicle industry is an example of that. And third, we are using more copper than we have coming onstream. The demand is increasing steadily and the supply has not caught up.”

Although China is the second-largest producer of copper, the Asian nation’s aggressive infrastructure development means it still needs to import the red metal. In fact, China is responsible for 40 percent of the world’s copper demand. “Infrastructural development in major countries such as China and India will continue to sustain growth in copper demand,” says the ICSG, which forecasts that Chinese copper demand will grow at a rate of around 3 percent in 2018.

A few of the drivers of China’s demand for copper products include the government’s Made in China 2025 program — which involves upgrading factories into “smart factories” — demand for electric vehicles, the internet of things and more environmentally friendly manufacturing.

Copper is highly ranked as a conductor of electricity compared with other metals. That and its anti-corrosive properties allow for its use across a wide range of energy-related technology applications — including energy-efficient generators, motors, transformers and renewable energy systems.

An interesting technological factor influencing rising copper demand stems from the growth in the electric vehicle (EV) market. “[T]he EV story is generally positive for copper over the long term. Both in terms of the metal used in the vehicles themselves and also the power distribution infrastructure required to charge the batteries,” Paul Benjamin, research director at Wood Mackenzie, told INN.

“As we transition to battery-powered EVs, we will need more copper,” pointed out Dr. Terrence Martell, chair of ICE Clear US and vice chair of the ICE Future US boards at Intercontinental Exchange (NYSE:ICE); Martell is also a former COMEX chief economist. “The Wall Street Journal recently featured a graphic sourced from Citigroup (NYSE:C) which demonstrated that plug-in hybrids and battery-powered electric vehicles use more than two and more than three times the amount of copper used in conventional cars, respectively.” According to Citigroup, conventional cars use 23 kilograms of copper compared to 51 kilograms in plug ins and 77 kilograms in EVs.

Environmental concerns are playing a larger role in global policy, and there are several countries looking to ban the internal combustion engine in favor of electric vehicles in the relatively near future — including the UK by 2040 and India by 2030. “This represents a huge change in the market,” Martell, who is also chairman of VVC Exploration, told INN.

This shift would also transform entire transport infrastructures as fleets become electric. BHP Billiton (NYSE:BHP,ASX:BHP,LSE:BLT) predicts that there will be 140 million electric vehicles by 2035, representing a significant portion of the global automobile industry.

Dr. Copper in the antimicrobial market

Martell said another growth industry in which he sees copper playing an important role is the anti-microbial market. “Currently this use for copper is not getting as much attention, but I think it will become a significant source of demand,” he explained. “Bacteria doesn’t grow on copper, and as we see increasing concerns about drug-resistant bacteria it would seem to me that you’ll find heightened use of copper surfaces in places like restaurant kitchens, major transportation centers and in hospitals where people are reasonably concerned about reducing bacteria.”

Studies conducted in three hospital intensive care units in the US showed a 58-percent reduction in infection rates. Several hospitals in France have also recently installed copper surfaces. “Global copper demand could be boosted by as much 1 million tons per year over the next 20 years if copper is deployed to fight infections in the home and public spaces likes schools, supermarkets and gyms,” according to Bloomberg Markets.

Supply imbalance may continue in 2018

“We have been increasing the amount of copper used without a concomitant increase in the available supply,” said Martell. “On top of that, we will see a significant number of labor negotiations in 2018. This is causing the market a little bit of discomfort because depending on how the negotiations go, there is a mild concern about supply disruptions, which would exacerbate the already existing imbalance in the production/consumption trade off.” He sees these fundamentals supporting prices at current levels.

Chile is the world’s number-one copper producer, and was in the news this past year for a number of mining contract disputes and labor strikes. Supply disruptions, like the historic 43-day-long strike that took place at Escondida, the world’s largest copper mine, cut global production by 5 to 7 percent, sending copper prices up 7 percent in Q1 2017.

That trend might continue in 2018. “There are between 20 and 25 collective negotiations expected [locally]. If some of them lead to significant strikes that would have a positive impact on prices,” said Sergio Hernandez, vice president of Cochilco, Chile’s state copper commission.

Copper’s critical use in numerous industries makes it the most precious of the base metals, and the one to watch when it comes to gauging the health of the global economy.

“The industrial metals as a group are an excellent gauge of the economy and within that group copper certainly has historically played a role. Something like lithium doesn’t have the range that copper has,” said Martell. “There are short-term drivers of the copper price and those are ‘what is China going to do tomorrow’ and ‘how many strikes we’ll see this year,’ but for the longer-term fundamentals of copper look to the way batteries and other technologies are developing.”

One response to “What’s Driving the Copper Market?”

Comments are closed.
See our exclusive index of Copper companies on the move
EXPLORE