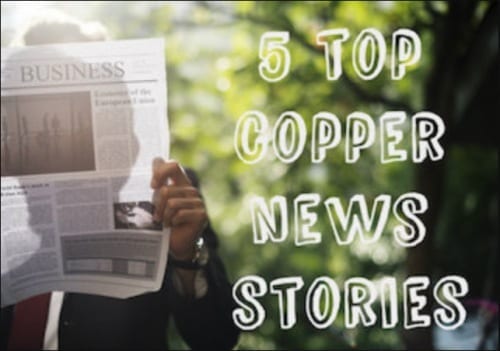 Which copper news stood out to investors the most in 2018? We run through our five most popular articles of the year in this overview.

In 2018, the copper story had two distinct halves. From January to early June, prices hovered around US$7,000 a tonne — but that was before the trade war locked into place and markets adjusted to the new reality of tariffs and retaliatory action.

It fell even lower in the weeks after that, but since a 2018 low of US$5,822 in early September, it’s been inching its way back up above US$6,000. Here the Investing News Network has a look back on the most popular copper stories over the past 12 months.

1. BHP Picks Copper Over Other Metals to Benefit from EV Boom

Early in 2018, BHP (ASX:BHP,NYSE:BHP,LSE:BLT) CEO Andrew MacKenzie endorsed copper as his pick to benefit from the coming electric vehicle (EV) boom, and discussed BHP’s plan to ride the wave.

“We have a strong growth plan for copper,” he said. “The copper market is an order of magnitude greater even when you allow for [EVs] than we would expect the cobalt market or lithium market to be.”

Anglo American (LSE:AAL) revealed in April that it had designs on a decision on its Quellaveco copper mine in Peru by mid-2018. The commitment was followed by the sale of 21.5 percent of the project to Mitsubishi (TSE:8058) in June, and a final decision in July, when the partners pulled the trigger.

First production of copper from Quellaveco is expected in 2022, and it will ramp up to full production of 300,000 tonnes a year in 2023 for its first 10 years of production.

Mining companies huffed and puffed their way through late 2017 and early 2018 to no avail, as a new mining code in the Democratic Republic of Congo (DRC) became a reality.

The takeaway from negotiations with Kinshasa by a consortium of miners including Glencore, Ivanhoe Mines, Randgold Resources (LSE:RRS), China Molybdenum (HKEX:3993) and AngloGold Ashanti (JSE:ANG) was simple: talk to the hand.

The new code includes a “strategic substances” categorization allowing the DRC to slap a 10-percent royalty on minerals of its choice, including cobalt and copper.

Around the middle of 2018, copper peaked in value as fears of a repeat of 2017’s supply disruptions gripped the market, with workers at BHP’s Escondida mine in Chile agitating for higher wages.

The union, which represents 2,500 workers at Escondida, demanded a signing bonus of US$34,000 per worker — 4 percent of the dividends paid to Escondida shareholders BHP and Rio Tinto last year.

The strike was eventually averted, and on cue the copper price fell.

Copper is a metal of the future; despite being in use since ancient times, the red metal is shaping up to be the backbone of the technologies of tomorrow, and production hasn’t been able to keep up.

So investors’ ears always prick up when a big name like Arnaud Soirat, CEO of the copper and diamond division at Rio Tinto, points to supply deficits and increasing demand.

Soirat predicted in April of this year that “tightening supply and solid demand are combining to produce a positive pricing environment … (Rio Tinto) anticipates global market supply and demand will keep close to balance in 2019 and 2020.”