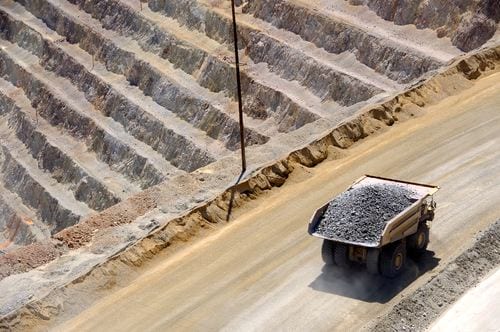 Due to their size and scope, copper porphyry deposits have the potential to become large-tonnage, low-cost operations based on mineralization.

The world’s most important sources for copper today are copper porphyry deposits, as they contain the largest-known exploitable concentrations of copper.

Copper porphyry deposits can range from 10s of millions in metric tons (Mt) to more than 1 billion Mt of ore. This high tonnage of mineralized rock and the associated long mine life that can span decades make them very attractive to both major mining firms and junior exploration companies.

According to a report by the United States Geological Survey, the output from copper porphyry deposits around the globe totals billions of kilograms each year. “These are some of the largest copper deposits in the world — most of the world’s copper comes from large porphyry deposits,” Mercenary Geologist Mickey Fulp told Investing News Network in a phone interview. Copper porphyry deposits are responsible for 75 percent of the world’s copper resources and reserves, and 20 percent of global gold production. These polymetallic powerhouses also account for nearly all of global molybdenum production as well as significant amounts of rhenium, silver, lead, tellurium, selenium, bismuth and zinc.

Emgold Mining Corporation (TSXV:EMR,OTC:EGMCF,FWB:EMLM) is a junior gold and base metal exploration company focused on advancing its projects in Nevada and Quebec.Send me an Investor Kit

Forged in what’s geographically known as “The Ring of Fire,” an area that surrounds the Pacific Basin, porphyry deposits are concentrated in the Southwest Pacific where two ocean plates have collided to form the island arcs we know as the Philippines and Papua New Guinea. They are also found in the orogenic belts of the west coast of North and South America, along convergent tectonic margins where ocean plates have subducted down into the Earth’s mantle.

A prime example of a copper porphyry hotspot is Chile, the world’s leading copper producer. Accounting for about 5 percent of the world’s total copper output, BHP Billiton (NYSE:BHP,ASX:BHP,LSE:BLT) and Rio Tinto’s (NYSE:RIO,ASX:RIO,LSE:RIO) Escondida mining complex in Chile produces more than 1 million Mt per year from two operating supergene-enriched copper-molybdenum porphyries. To the north of Escondida is the Collahuasi mine, held by Anglo American (LSE:AAL), Glencore (LSE:GLEN) and a Japanese consortium led by Mitsui (NASDAQ:MITSY). The world’s second-largest copper mine, Collahuasi, produced 559,000 Mt of copper in 2018. The world’s second-deepest open-pit copper mine, Codelco’s massive Chuquicamata deposit in Chile may have been originally comprised of over 9,000 million Mt of mined ore and reserves. Production in 2018 from the century-old mine totaled 320,744 Mt of copper.

In North America, the United States is the largest producer of copper and it is the fifth-largest in the world. Rio Tinto subsidiary Kennecott operates the Bingham mine in Utah, which is the deepest open-pit mine in the world — and the most productive. It’s estimated to have produced more than 20 million tonnes of copper since operations began in 1906. In 2018, Bingham produced more than 203,900 Mt of copper, 196,700 ounces of gold, 2.5 million ounces of silver and 5.8 million pounds of molybdenum. The Robinson mine in White Pine County, Nevada, was first discovered in 1867, with large-scale copper mining beginning in 1907. The mineralization system is porphyry skarn hosting copper, molybdenum and gold. Owned and operated by Polish copper miner KGHM Polska Miedź (WSE:KGH) since 2012, production in 2018 totaled 48,000 Mt of copper and 37,100 troy ounces of gold.

Grade is one of the most important factors to consider when evaluating a potential mine’s profitability. Grade refers to the concentration of a valuable mineral within ore, and higher-grade ore is typically cheaper to extract. The higher the grade, the more economical the deposit and the more likely it will be mined.

Other geological factors can have a large impact on the economic viability of a project. Within porphyry systems, the mineralization can extend vertically for several kilometers beyond the main base of the open pit. This vertical scale often translates to a decades-long mine life — Chuquicamata, Bingham and Robinson are not anomalies — meaning these mines can outlive market cycles, taking hits that would knock smaller mines out of commission. The metallurgical properties of this deposit type also make for lower cost mining operations.

“Copper porphyry deposits, despite their low to medium grades, are highly attractive to major producers for a variety of reasons, including their polymetallic nature, massive size and ease of mining. The ore is relatively inexpensive to mill and concentrate using flotation methods, heap leaching and electrowinning processes. These deposits are typically amenable to large-scale, low-cost operations using bulk-mining and milling or heap-leaching methods,” David Watkinson, P. Eng, president and CEO of Emgold Mining (TSXV:EMR,OTC Pink:EGMCF,FWB:EMLM) told the Investing News Network (INN).

Emgold has an extensive portfolio of gold and base metal exploration projects in Quebec and Nevada. One of the company’s recently acquired Nevada projects in the Santa Fe mining district is New York Canyon, a highly prospective project with significant copper-molybdenum porphyry mineralization. One of the most geologically diverse mining jurisdictions in the world, Nevada hosts a variety of mineralization systems including copper porphyry deposits. In fact, copper ranks behind gold as the second-most-produced metal in Nevada. In 2018, the state’s production of copper accounted for 5.5 percent of total US production.

“Our focus for New York Canyon will be to try to unlock the potential of the deeper porphyry mineralization that was identified back in the 1970s and 1980s but hasn’t been the subject of exploration since the early 2000s. We think the potential is there for a significant copper porphyry deposit, subject to additional exploration,” said Watkinson in an INN CEO interview.

The alteration haloes associated with the copper porphyry deposit type are much larger than the actual deposit and can cover tens of square kilometers in a district. The large scale of the mineralized system in these regions also lends itself to the formation of other types of deposits within the same area, including high-sulfidation epithermal gold-silver-copper deposits. The increased opportunity for the discovery of other deposits within the mineralized system has the potential to improve the economics of any copper porphyry project. For example, the historic Santa Fe gold mine, which operated in the 1980s and 1990s, was located just to the north of New York Canyon; it produced about 345,000 ounces of gold and 711,000 ounces of silver.

Copper porphyry deposits are the go-to for global copper production for several good reasons. Their enormous size, district-scale potential, extensive mine life, polymetallic nature, amenability to low-cost operations and high production rates rank them as one of the world’s most valuable deposit types on the planet.

The information contained here is for information purposes only and is not to be construed as an offer or solicitation for the sale or purchase of securities. Readers should conduct their own research for all information publicly available concerning the company. Prior to making any investment decision, it is recommended that readers consult directly with Emgold Mining and seek advice from a qualified investment advisor.