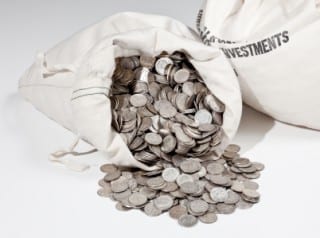 What happened in the silver market this year? Here’s a review of the precious metal’s market in 2016.

Silver prices surged this year after a tough 2015. The ongoing deficit, political announcements and concerns worldwide, and a weak US dollar have all impacted the precious metal’s market.
Here, INN looks back at the major developments that happened in the silver market in 2016.

After a troubled 2015, the white metal prices had a strong start in 2016. The gold-silver ratio was at its highest in the first two months of the year since February 2008. According to Commerzbank at the time, the silver price per ounce had benefited from a weaker US dollar, strong ETF inflows and purchases from speculative investors.


Take Survey
Silver hit $15.90/oz on March 1 after the Federal Reserve announced to leave interest rates unchanged. By the end of that month, the precious metal had gained over 8 percent from the beginning of the year.
In April, silver prices saw an impressive rebound and hit an 11-month high reaching $17.85/oz, outperforming the gold price, but dip back to $15.93 in June.
After the United Kingdom voted to leave the European Union, silver prices jumped over $20 an ounce for the first time in roughly two years and outshined gold in the post-brexit precious metal’s rally.
Brexit wasn’t the only political development that had an impact in silver prices this year. During 2016 the run for the White House kept the precious metal’s market expectant. After Donald Trump’s win and his announcements of infrastructure plans, metals rallied, but silver lost roughly 10 percent by November 25.

Political announcements and developments worldwide brought uncertainty in the markets and turned investors to gold and silver as a safe haven.
The UK voted to leave the European Union, in a decision that was unexpected by many, and silver made year-to-date gains of 44.74 percent, as of July 4th.
That week, PureFunds CEO Andrew Chanin told CNBC: “Silver is a metal that most people don’t really think about when they think about precious metals, but it does have this dual property towards both an industrial metal and a precious metal.
“So many of the reasons that investors chose to invest in gold, silver has many of those properties, at the same time as having a lot of demand coming from industrials,” he said.
Another major political development that drove markets was the US Presidential election. Once the winner was announced, metals rallied, supported by the proposed infrastructure plans that could be implemented by the incoming US President Trump.
David Morgan suggested that this was not only the reason of the rally, “The economic and financial conditions are entrenched so deep, and so far, and so wide that we have a precious metals bull market,” he said.
After Trump’s victory, the US Federal Reserve finally announced the rate hike already expected by the markets, as they are confident that the economy will grow.
“Job gains have been solid in recent months and the unemployment rate has declined,” the Federal Reserve said in a statement.
GFMS Analyst Erica Rannestad said: “The two geopolitical surprises this year, Brexit and Trump’s win, led to increased uncertainty in the market.
“As these two events unfold, uncertainty is expected to reduce, which would be negative for safe haven demand.”

The silver market is expected to be in physical deficit for a fourth consecutive year in 2016 with a total annual shortfall of 52.2 million ounces, the GFMS Silver Institute reported.
Solar power demand has been rising, accounting for around 8 percent of overall silver consumption. Sales of jewellery and silverware, the largest single segment of physical demand, are expected to have dropped to 257.6 million ounces, GFMS said, their lowest since 2012.
“A decline in discretionary spending, thrifting, lower economic growth and a higher silver price have all contributed to the overall decline,” GFMS Analyst Johann Weibe said.
Demand for silver from the photovoltaics industry is forecast to increase by 11 percent to reach a record high of 83.3 million ounces this year, up from just 1 million ounces in 2002.
GFMS analyst Ling Wong said to Reuters: “We do expect photovoltaic installations to see stable growth in the coming years — about 3-5 percent per annum — but this does not necessarily cascade to silver demand growth.”
Similarly, in terms of supply, the GFMS Silver Institute forecast that the total silver supply will fall 3 percent to 1,012.4 million ounces in 2016. The decline is expected to be driven by a 1 percent drop in mine production, a 0.3 percent fall in scrap supply and net de-hedging of 20.0 million ounces.
HSBC also projected a silver supply deficit of 116 million ounces this year and forecasts mine supply to fall 887 million together with a silver-scrap supply decrease of 145 million by the end of the year.
“After many years of steady increases, we anticipate a reduction in mine supply in 2016 and 2017,” HSBC said.

Earlier in the year analysts made predictions as to what would happen to silver in 2016. In an interview with INN CPM Group’s Jeffrey Christian expected a rebound in precious metals prices.
“We think that gold and silver probably have fallen pretty much as low as they will, and we’re looking for them to bounce along the bottom and then start to rise later this year,”
Similarly, Bo Ponly of Gold 2020 Forecast, predicted in February that silver prices had reached bottom in December 2015.
“We believe from December, the low, it’s progressing upwards. It’s finishing out a channel right now. We’re about to have some pretty exciting moves on gold and silver.”
Speaking about the resource sector in 2017,Sprott US Holdings’ President and CEO, Rick Rule, said to INN: “If the resource sector that you’re referring to is primarily precious metals, I think the direction is a little lower first because there’s a lot of confidence in the economy, and then much higher.”
Morgan, who was bullish on silver since the beginning of 2016, anticipated a better year ahead, “The bull market that started in 2016 is still intact, even if this correction is a bit trying on us all.”
He suggested that investors should diversify if they are leaning towards the precious metals, and said: “and then that portion of your portfolio, which I then recommend 10 maybe 20 percent if you are a full-fledged gold or silver bull.”
Don’t forget to follow us @INN_Resource for real-time news updates!
Securities Disclosure: I, Priscila Barrera, hold no direct investment interest in any company mentioned in this article.

One response to “A Look Back at Silver Trends 2016”