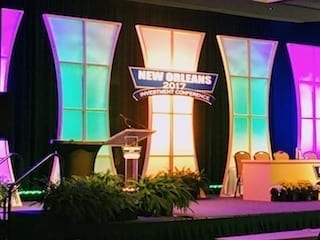 We spoke with over a dozen key presenters at the New Orleans Investment Conference — here’s all of our video coverage in one place.

Held every year for over four decades, the New Orleans Investment Conference is an opportunity for investors to further their knowledge of the trends driving US and global markets.
This year’s event ran from October 25 to 28, and featured dozens of speakers and exhibiting companies. Gold featured prominently in discussions, but many other topics came up as well, including other metals and commodities, cryptocurrencies and more.
If you weren’t able to make it to the show, don’t worry. We’ve put together a recap of the four-day event, and below we’ve gathered all of the video interviews we conducted with speakers at the show. Scroll down to get a taste of what happened.

Brien Lundin: Here’s Why a Higher Gold Price is Inevitable

Brien Lundin runs the New Orleans Investment Conference, and in this interview he lays out his argument on why a higher gold price is inevitable. “The bottom line is there has to be some significant depreciation of the dollar, and that’s bullish for precious metals. That’s why much higher gold prices are inevitable,” he says.

The gold price has had a tough time reaching — and staying above — $1,300 per ounce this year, but Rick Rule of Sprott US Holdings isn’t concerned. “I’m very satisfied … with gold’s performance this year,” he comments. Rule also touches on cryptocurrencies and the impact — or lack thereof — of US President Donald Trump.

Doug Casey: Why You Need to Look at Gold, Cannabis and Bitcoin

Well-known investor and self-described “notorious bear” Doug Casey believes western civilization is on the decline, and he’s not optimistic that its downward trajectory can be stopped. That might sound bleak, but Casey has a suggestion for those who want to weather the storm — consider speculating rather than investing, and look at gold, cannabis and bitcoin.

Peter Schiff: Do This to Survive the Stock Market Bubble

The US Federal Reserve has inflated three stock market bubbles this century, and according to Peter Schiff of Euro Pacific Capital, the current one is the biggest yet. So what’s an investor to do? Schiff says one option is to look at gold.

2017 hasn’t brought many surprises for David Morgan. Silver has performed as he expected, and like he predicted last November, Trump has had little impact on the resource space. However, he emphasizes here that debt remains a major issue.

Brent Cook: Majors are Looking at This Type of Junior

Major miners have cut back on exploration dramatically in the last few years, but according to Brent Cook of Exploration Insights, this year they’ve started moving back into that arena once again. And more importantly, they’re starting to fund juniors.

Adrian Day of Adrian Day Asset Management isn’t keen on the US stock market, but that doesn’t mean he thinks investors should stay away from stocks in other areas. He comments, “if gold is cheap relative to the financial assets like stocks and bonds, gold stocks are even cheaper because they’re cheap relative to gold on a fundamental basis, on a price basis.”

Louis James, editor of the International Speculator, still has high hopes for gold and uranium, two metals he was positive about at the beginning of the year. But when asked what he’s most excited about right now, he said energy metals are at the top of his mind.

Bill Murphy: Gold’s Next Move Up Could be Explosive

Bill Murphy has spent nearly two decades working to expose gold market manipulation as chairman and director of the Gold Anti-Trust Action Committee, but he believes there’s still much to be done. In this interview he comments on what he sees going on currently and explains why investors should continue to get into the gold market.

Judy Shelton: Trump, the Next Fed Chair and the Gold Standard

Trump transition team economist Judy Shelton shares her thoughts on how he’s doing. She also talks about the new US Federal Reserve chair and why the gold standard is important.

Dennis Gartman: Investors Should be More Exposed to Commodities

Dennis Gartman, publisher of the Gartman Letter, believes investors should consider increasing their exposure to commodities. “And if I had to choose one area, the grains seem awfully cheap to me,” he says in this interview.

Chris Blasi: Bitcoin is No Substitute for Physical Precious Metals

As the creator of the PMC Ounce, a unique investment asset that provides investors with exposure to gold, silver, platinum and palladium, Chris Blasi is no stranger to innovation. But Blasi, who runs precious metals dealer Neptune Global Holdings, encourages investors to be wary of cryptocurrencies like bitcoin.

Thom Calandra, Part 1: Why Gold Needs to Get Digital

Thom Calandra of the Calandra Report explains what he thinks of cryptocurrencies, and discusses what gold market participants can do to make the yellow metal more competitive with them.

In part two of our interview with Calandra, he discusses the lithium, graphite and uranium sectors, including which stocks he currently likes in those sectors.

Uranium has spent years in the doldrums, but Nick Hodge, founder and president of the Outsider Club, thinks it won’t be long before there’s a turnaround. “I don’t think any uranium company in the world is making money [at $20 to $21 a pound], and so by the laws of supply and demand, the price has to rise,” he says.
Don’t forget to follow us @INN_Resource for real-time news updates!
Securities Disclosure: I, Charlotte McLeod, hold no direct investment interest in any company mentioned in this article.
Editorial Disclosure: The Investing News Network does not guarantee the accuracy or thoroughness of the information reported in the interviews it conducts. The opinions expressed in these interviews do not reflect the opinions of the Investing News Network and do not constitute investment advice. All readers are encouraged to perform their own due diligence.