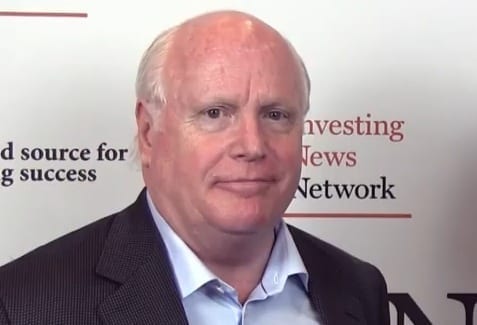 The Investing News Network caught up with James Pettit, president and CEO of Aben Resources (TSXV:ABN), at the recent International Metal Writers Conference in Vancouver. Aben is a Canadian gold exploration company developing projects in BC, the Yukon and Saskatchewan.
Pettit said over 100 holes have been drilled at Aben’s flagship Forrest Kerr project in BC’s Golden Triangle over the last two decades, while about 20,000 soil and rock samples have been taken. Over the course of eight months, the company consolidated all of the historical data for the property, and that has helped identify 20 to 30 drill targets. This year, Aben expects to focus on drilling three to four of those targets.
According to a recent news release, the company is aiming to have an exploration team arrive on site in the third week of June to begin fieldwork, including surface sampling. Aben has also applied to the BC Ministry of Energy and Mines for a multi-year permit.
Aben also has an option agreement with Eagle Plains Resources (TSX:EPL) to earn an 80-percent interest in the Chico property in Saskatchewan. Additionally, the company has a 100-percent interest in the Justin project located in the Yukon, southeast of a project held by Golden Predator Mining (TSXV:GPY). Aben’s 100-percent-owned Hit property is also located in the Yukon.
In terms of the gold market, James Pettit said gold has performed exactly as people thought it would, and he believes it will go higher.
The transcript for this interview can be found below.

Metals Weekly Round-Up: Gold Hits 7 Year High, Then Retreats
Cannabis Analysts: Institutional Investors Still on the Sidelines
Potash Fertilizers: What’s the Difference Between SOP and MOP?
VIDEO — Rick Rule: Positioning for the Good, the Bad and the Ugly in Mining