Georgia Williams
US Election 2020 and Gold

What will happen to the gold price if Joe Biden wins the presidential election? Experts weigh in on how the yellow metal may perform.

Americans have a lot to consider ahead of the presidential election. Some of the most pressing issues facing the head of state will be the country’s US$23.3 trillion in debt, rising COVID-19 cases and the growing chasm dividing the country socially.

Reviving the economy will also be an immediate challenge, no matter the winner.

In the resource sector, however, one of the most pressing questions investors have is what will happen to the gold price post-election. After a major increase this year and over the course of Donald Trump’s presidency, what would a Joe Biden win mean?

Read on to learn what mining experts think, and click here for coverage of what market watchers believe could happen to gold in the event of a Trump victory.

The last Democrat in charge of the White House was Barack Obama, and if Biden wins on November 3, the country he will lead will be markedly different than the one he saw as Obama’s vice president.

The overall US market is one reason why. Before the coronavirus outbreak, the Dow Jones Industrial Average (INDEXDJX:.DJI) had been on a steady upward trajectory since February 2009, and in February of this year, the index of 30 large US-listed companies reached an all-time high of 29,398.

The rally was of course short-lived. Markets plummeted globally just over a month later, and the Dow hit its lowest point since November 2016 at 18,588. 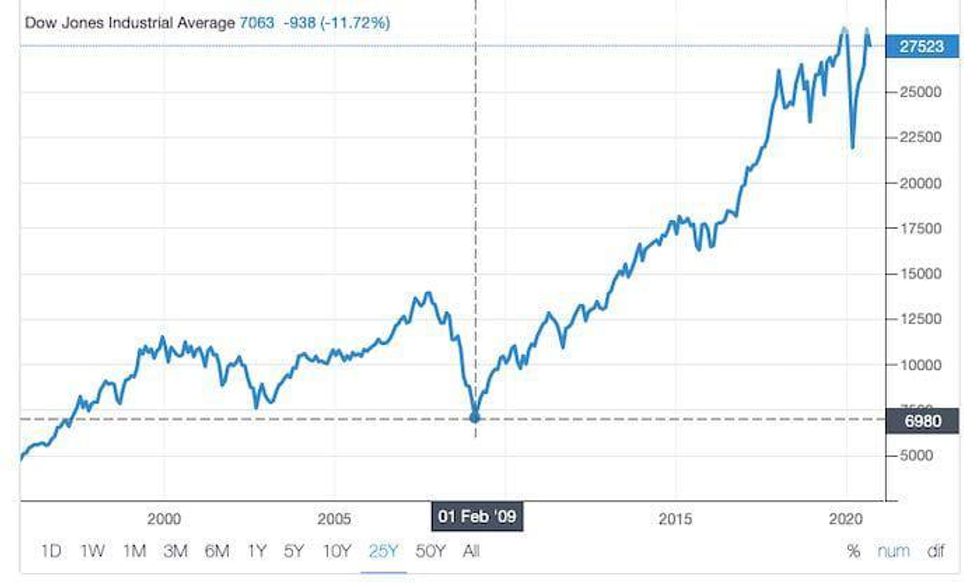 At the same time, the price of gold has been incrementally increasing since November 2016 — it’s risen from US$1,183 per ounce at that time to around US$1,900 a month before this year’s election.

While his first four years benefited the metal greatly, Obama’s second term proved more volatile. Gold slipped from the US$1,685 level in 2013 to approximately US$1,195 in 2017, a 28.9 percent decrease.

Performance of the gold price from January 2009 to January 2017. Chart courtesy of Kitco.

Over the entirety of his presidency, gold’s value increased by 34 percent. It should also be noted that the metal’s previous all-time high of over US$1,900 occurred during Obama’s tenure. 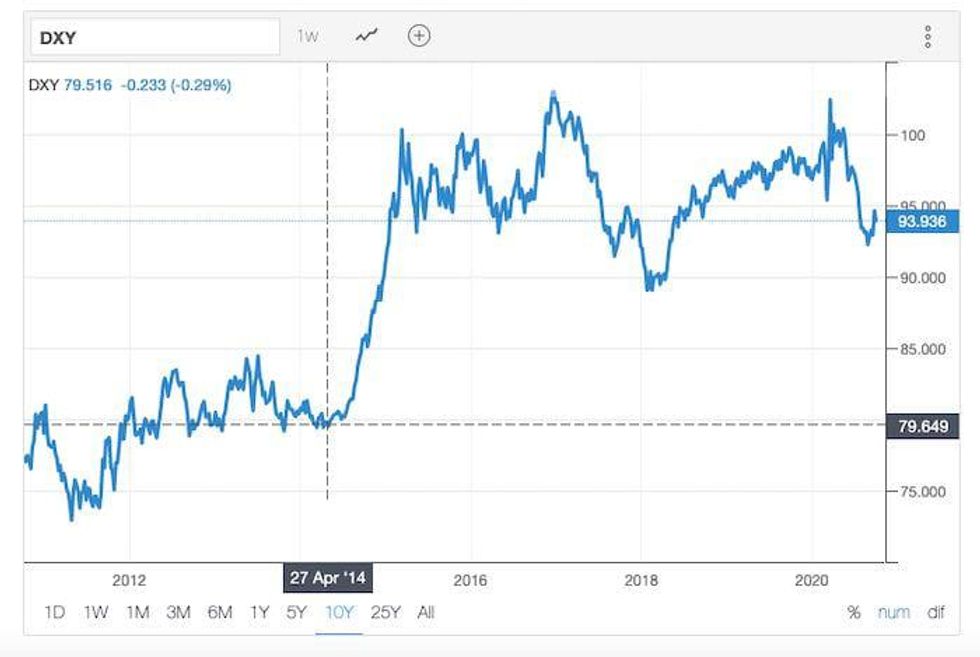 Performance of the US dollar over 10 years. Chart courtesy of Trading Economics.

As mentioned, gold moved positively during Trump’s first term. In January 2017, the currency metal was priced at US$1,210, and there was a fresh all-time of more than US$2,000 set during his presidency.

By the end of September, gold had added roughly 54 percent to its value under the Republican leader. 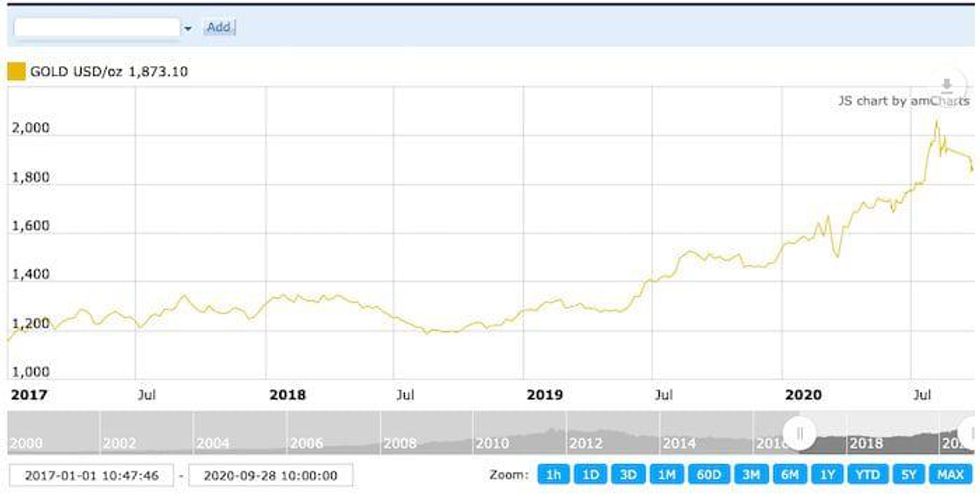 Performance of the gold price from January 2017 to September 2020. Chart courtesy of Kitco.

Looking at Trump’s potential impact on gold and the dollar, Lobo Tiggre of Independent Speculator posited that a second Trump term could be just as good as the first in terms of the gold price.

However, he did note that a Democratic sweep on election night could also be a good thing.

He continued, “I’m just saying as an analyst looking at the gold price, I suspect a Biden administration, especially with Democrats in both houses of Congress approving long-delayed infrastructure plans and other things — I think that would be really good for not just gold, but all commodities.”

Biden and gold: Price rise not guaranteed under Democrats

Not all mining sector watchers are quite as optimistic about a Biden victory. For example, Brent Cook of Exploration Insights sees a Democratic win having little impact on gold’s value — he believes Biden will simply have other issues to tackle.

“I think it would stay about the same. I mean, bottom line, the amount of money that’s being pumped into the system, in the trillions of dollars and the push towards inflation, those things aren’t going to change regardless of who’s in charge,” he said.

The trained geologist and founder of Exploration Insights instead sees another catalyst being more motivational for the gold price.

“I think probably more impactful for the gold price is going to be when and if a (COVID-19) vaccine becomes widely available, which starts kicking the US economy back into gear,” he said.

A widespread restart paired with a vaccine could add US$100 or more to the gold price, added Cook.

The junior mining expert also expects the sector to keep its current pace regardless of who is in the oval office. “I think it’s neutral,” said Cook. “If Biden gets in, there’s so many things you’ve got to fix and repair. And junior miners and metal prices are not very high on that list.”

All the experts the Investing News Network spoke to did agree that while uncertainty is positive for gold, it is bad for the dollar — and there is undoubtedly more uncertainty ahead.

“I see political downside in the dollar just because of the general level of argument over politics in the US,” said Byron King, who writes the Whiskey & Gunpowder newsletter at Agora Financial. “We only like democracy as long as our side wins; when we lose, we spend the next four years waging a permanent campaign or permanent coup to stop this guy because we don’t like him.”

Biden and gold: The disruption factor

For Mercenary Geologist Mickey Fulp, a Biden presidency would a deterrent for gold, especially the transition period between governments, which he would expect to cause market volatility.

Fulp sees downside in gold because he views the yellow metal’s August run up to over US$2,000 as unsustainable, and believes gold has no resistance at its current level. “(Gold has) a really, really strong base at US$1,720, plus or minus. So it has a lot of downside risk right now,” he said.

“Gold and disruption go hand-in-hand,” she said. “So to the extent that there was continued and increased social unrest after the election, that I think would benefit gold prices for sure.”

The economic commentator explained that a Trump presidency would be viewed as “friendlier” for riskier assets (including gold), while a Biden presidency could result in a crackdown on monopolies.

“There’s a presupposition that Biden would clamp down a little bit more on the monopolization of the US economy, which, I’m sorry, but a blind person could see that,” she said.

“It doesn’t take much to understand that we have become a nation that is worse than what it was back in the ‘robber baron’ era. So that would certainly come as a risk if Biden was to win.”

Regardless, DiMartino Booth doesn’t think either candidate will tackle what she views as the Fed’s oversteps in terms of price discovery.

“I don’t know any leader right now being considered to run the country that would have the strength given the (present) fiscal backdrop. Given how deep the recession is, and how prolonged it looks like it’s going to be — who would even begin to try and rein in the Fed right now, because they need the money printers, so to speak. Especially if we see continued gridlock,” she said.

While fiscal stimulus and national debt are a priority in the US, similar issues are playing out in countries around the globe. That’s a factor that Tiggre believes could lead to an uptick for metals across the board.

“We will see a commodity supercycle with the precious metals, the energy commodities and industrial metals all surging higher,” he said.

“Either because the economy recovers and the raw materials of the economy are needed, or because it doesn’t, and the stimulus really opens the inflationary floodgates and includes infrastructure plans and other investing that would be good for commodities.”

Leading up to the first presidential debate at the end of September, a Reuters poll tracker had Biden leading Trump 50 percent to 40 percent. After the debate, Biden’s percentage remained at 50 percent, while Trump’s had risen to 42 percent.

Where Does US Energy Security Stand Ahead of the Election?

Too Close to Count: How a Contested Election Could Play Out

What Happens to the Gold Price if Trump is Re-Elected?

What’s at Stake for Mining in the US Election?

Featured US Election 2020 and Gold Stocks