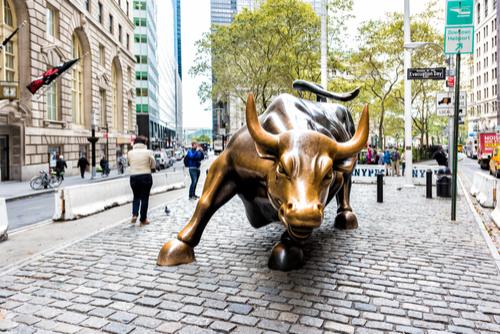 What is a gold bull market? Here’s a look at the factors that create them, how they affect company share prices and more.

Although many market watchers believe that gold has not seen a bull market since 2011, others argue that rising prices, supported by ongoing geopolitical issues and a pause in Fed hikes, are signs that the yellow metal is currently entering a new bull market.

In order to truly understand a gold bull market, it is important to recognize the contributing factors and the ways in which it affects the economy as a whole.

Read on for an overview of the factors that create a bull market for gold, an analysis of long-term versus short-term bull markets, how a gold bull market affects stock prices and whether or not the yellow metal is currently in the middle of a bull market.

What is a gold bull market?

Although a bull market typically refers to the stock market, it can be applied to anything that is traded, such as precious metals.

Bull markets are generally characterized by optimism, investor confidence and an increase in prices that is expected to continue for an extended period of time. However, even with these factors in play, it is oftentimes difficult for market watchers to predict when the trends in the market might change.

While it is common for bull markets to appear when the economy is strengthening or already strong, the opposite is true for a gold bull market. Due to the fact that the yellow metal is a safe haven for investors, it flourishes when the economy is on shaky ground and the US dollar is struggling — two factors that send investors to seek safety within the market.

When optimism, investor confidence and price increases surround the gold space, and generally the precious metals sector as a whole, it usually means that those same things do not fully exist within the economy on a grand scale.

Additionally, there are psychological price levels that indicate when the yellow metal has begun or is about to begin a bull market. For some time, that number has been over US$1,350 per ounce.

Finally, there are two types of bull markets for gold. The first is a long-term bull market, in which gold rallies and analysts predict that the rally will last for a year or more. The other is a short-term bull market. In this case, yellow metal prices pick up, but market insiders don’t believe that the increase will last longer than a few months, so they predict it will be a shorter phase and not a full, official bull market.

What factors create a bull market for gold?

In today’s global economic landscape, there are currently six common factors that create a bull market for gold.

The first, and perhaps the largest influence on the precious metal, is monetary policy, which is controlled by the US Federal Reserve.

When the Fed implements interest rate hikes, gold tends to dip as a response. When the economy experiences several rate hikes within a year, like it did in 2018, it becomes a rather hostile environment for the yellow metal. These hikes tend to increase the greenback — which results in the lowering of gold prices.

Federal Reserve commentary can also help foster a bull or bear market for the gold space. The Federal Open Market Committee (FOMC) holds meetings approximately once every six weeks where it discusses not only the state of the US economy but the future of monetary policy as well. If the FOMC implies that it will raise interest rates in the near future, the gold price tends to react poorly.

On the flip side, if the FOMC hints that rates will remain steady, gold prices generally rise due to the fact that the opportunity cost of forgoing interest-based assets for gold remains low.

The second gold bull market driver is, as previously noted, economic data. Economic data, such as jobs reports, wage data and manufacturing data as well as broader-based data such as GDP growth, influences the Federal Reserve’s monetary policy decisions, which can in turn affect gold prices.

Supply and demand for gold is a third common factor that influences a bull market. Essentially, an increase in gold demand paired with constrained or low supply often creates an upswing in the precious metal’s price. Conversely, oversupply of the yellow metal or a lack of demand will inevitably negatively affect the overall price of gold.

Finally, currency movements and exchange-traded funds (ETFs) also have a hand in which way the gold market will sway. The movement of currencies, very specifically the US dollar, has the power to affect the price of gold either negatively or positively. When the greenback is up, gold is down, and therefore it becomes harder to create a bull market for the yellow metal. However, when the US dollar is down, the price goes up, as investors seek the metal as a safe haven and become far more likely to buy gold. As previously mentioned, climbing prices of gold bode well for a bull market.

As for ETFs, while they remain the smallest influencer on bull markets, a surge in the trading of these funds has the ability to lift the price of gold and therefore increase its chances of flourishing.

How do stock market prices affect a gold bull market?

Like with a strong economy or a heightened greenback, flourishing stock market prices tend to push down the price of gold and stave off the yellow metal from being bullish.

For example, the end of the 2001 bear market for gold coincided with the weakening of an upward trend in the stock market.

“This can be explained by the dot-com bubble of 2001. As the stock market collapsed after the bubble burst, investors were looking for secure investments, including gold and silver,” states a report from Sunshine Profits.

This event ignited the price of gold while the stock markets were in decline. Similarly, in 2008 gold proved to be bullish in the wake of the international financial crisis. The metal’s safe-haven nature prevailed.

“These factors are essential for precious metals investors as they might predict a bull market for gold from the price trends and developments in the general stock market. In such a situation, investors open long positions in metals in hope of profiting if metals actually move higher,” Sunshine Profits notes.

Are we headed for a gold bull market soon?

As investors begin to regain confidence in gold, many of them have now begun to wonder if a gold bull market is just around the corner. According to several analysts and market watchers, the current global economy is positioning the yellow metal to go bull very soon, with many speculating it might happen before the end of 2020.

“We’re going into a deep economic crisis [that] may be starting in about 12 months [and] maybe lasts two or three or four years […] I think this is going to be a little more gradual, with a lot of down days, and I think that’s what’s going to be a really good catalyst for gold,” Dr. Kal Kotecha recently told the Investing News Network (INN).

Chantelle Schieven, research head at Murenbeeld & Co., shares Kotecha’s sentiments, telling INN, “it is going to take some time, so we’re looking at an average price of about US$1,330 for the year but we do think there’s over a 40 percent probability gold will break US$1,400 in the second half of the year.”

Schieven’s comments are particularly bull-forward due to the fact that most industry insiders see that price as a sure indicator that a bull market is near, and, if prices can maintain that level for an extended period of time, it will be hard to argue that the yellow metal remains bull-shy.

Of course, only time will tell where the precious metal ends up, but if current factors remain intact, no one will be uttering the words bear and gold in the same sentence.

3 responses to “Is Gold Back in a Bull Market?”