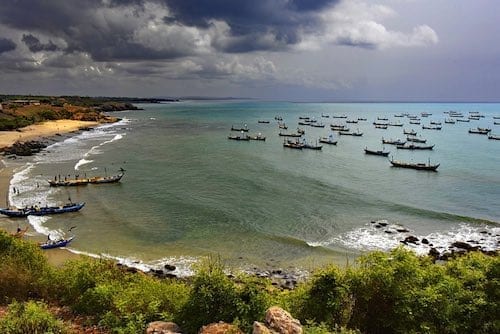 The final part of this series explores Ghana’s strengths moving forward as it develops its gold mining credentials and tackles concerns.

Did you miss parts one and two of this series? Read part one here and part two here.

Africa’s newest top gold producer has its challenges — but it’s attracted investment for a reason, with a stable democratic government and a friendly business environment.

The country enjoys a history of mining, advantageous geology, a stable outlook and a bright future if it can build on its successes so far.

Ghana hasn’t just slipped into first place in Africa because South Africa’s gold mines appears to be in decline; it has many of its own strengths behind it.

Coetzer, former CEO of Golden Star Resources, explained that Ghana is comparable to major mining jurisdictions like Nevada and Ontario, where wider communities have become accustomed to mining over many generations and the industry is generally understood, leading to a long line of establishments catering to mining.

“The history and track record of mining in that jurisdiction is now well formed, and the understanding of the geology is also getting better,” he said.

“There’s no surprise for me that it would have yielded a lot of gold and that it will continue to do so.”

Galbraith, who is a research analyst with S&P Global, described Ghana as one of the world’s top mining districts.

“Naturally, Canadian mining companies have gravitated toward that gold and will likely continue to do so, as will the Australian, US, South African, UK, and Chinese companies.”

“Canadian companies are and have been active in Ghana (and West Africa at large) for quite some time. Canadian mining companies as a group are quite active in the gold space, and Ghana is a premier gold mining district,” said Galbraith, adding that Ghana’s long history in mining is working in its favor.

“It also has a well-established mining framework and is well regarded as a mining-friendly jurisdiction.”

Swinoga, who is Canadian mining and metals leader with EY and worked as an executive with Golden Star Resources, said that the government is broadly supportive of mining — as is the general population.

“It’s developing, and they’re doing a very good job of nurturing that and nurturing infrastructure and supporting miners.”

So what about Ghana’s future? Each expert INN spoke to expressed optimism that there is indeed a bright future for the country despite all its challenges.

Galbraith said that Ghana has been showing a lot of promise.

“Its commercial gold mining sector has been growing and will likely continue to do so — especially as some of its older mines near depletion and will need new sources to replace that aging production.”

One of the big name developments is AngloGold Ashanti’s (ASX:AGG,NYSE:AU) Obuasi project, which the company has committed to reopening with a US$500 million investment.

To do so, the company signed a number of agreements with the government in early 2018 that cover development, tax concessions, security and even reclamation security to clear the site of the galamseyers who had overrun the project.

When ramped up, Obuasi has the potential to add an average of 350,000 to 450,000 ounces to Ghana’s gold production during its first 10 years in operation, with first gold expected by the end of this year.

On galamseyers, Galbraith noted that the government is well aware of the issues they pose for the development of the nation — though they account for up to a third of its gold production and are, indeed, part of the country’s success story.

“The country is aware of these problems and is working on legitimizing and establishing enforceable regulation in its galamsey sector, but it’s still a work in progress. In any event, holding those production levels will depend on how much gold is produced from these small-scale operators.”

When asked about the sustainability of current production levels, every expert said that there is little to suggest Ghana will fall away.

“If Ghana’s small producers continue producing at current levels, and South Africa’s gold sector doesn’t pick back up dramatically (which is unlikely), then Ghana should continue occupying that top spot for some time.”

Coetzer agreed. “Yes, there’s no reason I can see that they will not continue to grow. The only thing that I would say that the country would need to address to continue its growth profile is power supply.”

Swinoga also opined that the government of Ghana is moving in the right direction in supporting mining, and added that, with more attention on the country, new technology and investment in infrastructure will continue to support raised production levels.

“We haven’t seen a lot of new technology put in place on this. That’s another benefit that could be forthcoming,” he said.

“I think it is sustainable. I think it’s something that we’re going to see continue to grow in maybe not leaps and bounds, but certainly the winds are behind it and I believe it’s sustainable.”

Despite being a self-confessed pessimist, Chief Risk Officer at In-D-Tel International Dumbrille also said that Ghana is going in the right direction — with some qualifications.

“With the security concerns aside, the long-term outlook currently looks strong, with a favorable business environment for the region, oil and gas exploration and availability of several minerals and a growing middle class,” he explained.

“Furthermore, AngloGold Ashanti’s Obuasi is going back online, which further increases gold production; but first, they need to remove the illegal miners on the site.”

Taxes are also something to take note of, said Dumbrille.

“Ghana cut its corporate tax rate in 2016 and 2017 and has a mineral royalty to a sliding scale based on gold prices, from a 5 percent flat rate.”

Finally, keep in mind that Ghana has a general election next year to elect its president and members of parliament, meaning there could be policy developments as well as potentially populist promises.

A windfall tax was put on ice in 2014 as the mining industry wasn’t strong, but given the government was considering introducing it to help with its deficit — echoing similar approaches in other parts of Africa,  though not on the same scale — it could make a return.

“They are looking at other countries and seeing what they’re up to — South Africa, Tanzania, how they’re tackling their debt — they all get ideas from each other,” said Dumbrille.

On balance, the future for Ghana appears to be one with an upward trajectory, with the miners operating there espousing its strengths while the challenge it faces are capable of being overcome.

Besides the miners mentioned above, Ghana also hosts operations belonging to Gold Fields (NYSE:GFI,JSE:GFI), which has interests in the Damang and Tarkwa mines, as well as the Asanko joint venture with partner Asanko Gold (TSX:AKG).

There’s also Perseus Mining (ASX:PRU,TSX:PRU,OTC Pink:PMNXF) with its Edikan mine, and Asante Gold (CSE:ASE), which is exploring the Kubi mining lease — though this is far from an exhaustive list of companies either exploring or developing interests in the country.

4 responses to “Ghana for Gold, Part 3: Into the Future”