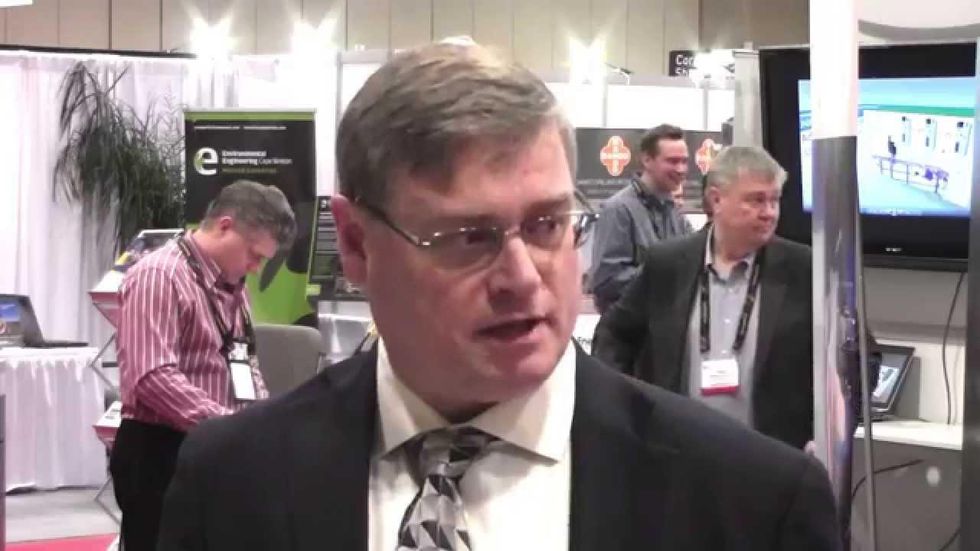 At the 2015 PDAC International Convention, Trade Show & Investors Exchange, Resource Investing News spoke with John Kaiser of Kaiser Research about his outlook for scandium and the broader metals markets. Kaiser is bullish on scandium, and spoke about what’s driving his predictions for the metal.

At the 2015 PDAC International Convention, Trade Show & Investors Exchange, Resource Investing News spoke with John Kaiser of Kaiser Research about his outlook for scandium and the broader metals markets.

Kaiser is bullish on scandium, and spoke about what’s driving his predictions for the metal. While he admitted that there’s currently only about 10 tonnes of supply of the obscure metal, he pointed out that there’s more than just 10 tonnes of demand.

“There’s an enormous latent demand for scandium if it ever became available on a primary, scalable basis,” he said, adding that hundreds and thousands of patents have been filed regarding scandium. With big deposits being found in Australia, the story could become more prominent in the near future, with a market driven by juniors rather than major mining companies.

He also answered some questions raised by readers in response to an article on his recent presentation at the Vancouver Resource Investment Conference in January, and spoke about Scandium International Mining (TSX:SCY), which he owns shares in and sees as the most advanced player in the space.

In terms of other metals, Kaiser said he favors zinc and diamonds, and while he realizes copper has had some troubles, he suggested it could potentially move higher sooner rather than later.

RIN: I’m Teresa Matich with Resource Investing News. Here with me today at PDAC is John Kaiser of Kaiser Research. John, thank you for joining me.

RIN: So, at the recent Vancouver Resource Investment Conference, you mentioned that scandium could go ballistic in coming years. What’s driving that prediction?

Scandium is a metal that makes aluminum very special. So, there’s an enormous latent demand for scandium, if it ever became available on a primary scalable basis. And that has not been the case for last 40 – 50 years, and hundreds, thousands of patents have been filed on special things scandium can do.

The reason it can finally become a very prominent story is that big deposits at grades three to four times higher than the best ones that the Soviets mined have been found in the last six years in New South Wales of Australia. These are going to start coming onstream in two years and it’s going to demonstrate to the aluminum industry that, yes, scandium can be made available at a reasonable cost on a scalable basis and where we can finally start to use it in our various product rollouts.

RIN: Okay. That said, we’ve received comments from some of our readers who are skeptical about a bullish outlook for scandium, given the difficult metallurgy that sometimes come with the metal and byproducts such as thorium and uranium that can be difficult to deal with. What are your comments on that?

JK: Well, the deposits that this is coming from are laterite deposits in Australia from which they can remove nickel and cobalt. So whatever thorium, uranium levels are in these deposits are background levels that are already being dealt with. Some deposits such as pegmatites, and so on, have enriched our scandium grades, often with rare earths. These ones typically have a higher thorium-uranium content that has to be dealt with like with most rare earth deposits. But this group of projects is not going to have a thorium type issue.

[As for] metallurgy, that’s where the grade comes in. You have to get the scandium out of the mineralogical structure that it’s stocked in and that requires acid and heat. Those are all input costs and if you don’t have sufficient grade – [if] you cannot work out the best sequence to tease the metal out of this rock – you will not have an economic deposit. Not every deposit will allow the scandium to be extracted on a commercial basis.

RIN: You’ve also mentioned that Scandium International Mining (TSX:SCY) is the most advanced project in this space. And you just spoke about their patents. What do you think of that move to apply for patents that cover scandium processing technologies?

JK: This company has been involved with the Nyngan Scandium Project since late 2010 and has spent a lot of time and effort sorting out the metallurgy for producing scandium, and they have actually done it through small-scale pilot plant projects. They are the most advanced because the other ones just recently recognized that scandium is present.

Robert Friedland’s Ivanhoe (TSX:IVN) owns the Syerston deposit, and they did the assays in the last 10 years while they were doing feasibilities in nickel-cobalt project. When they started to understand what a big thing scandium was, they realized, “we have the richest and biggest scandium deposit in the world.” This is now being sold to another Friedland company in Australia called Clean TeQ (ASX:CLQ) which has some in-house processing technology.

Now, the patents that Scandium International has filed, they are important because they’ve done a lot of work to figure out how to do this. They’ve worked with engineering companies and having done that work, they’re kind of keen to not see the competition get any short cuts. They got to do it on their own.

So, this kind of puts a freeze on engineering companies doing a wing-wing nudge, “hey, why don’t you do this?” rather than following all that dead ends that Scandium International had to pursue in order to come up with a solution.

So, it’s kind of a protective measure, and it sets them up potentially to receive licensing fees down the road from some of these other projects such Syerston or Owendale, which Platina (ASX:PGM) owns when they want to come onstream. I think the whole cluster of these deposits will eventually come on stream to supply the global market.

RIN: Okay. So, we’ve talked about scandium, what other metals are you bullish on?

JK: Well, I’m still favorably inclined to zinc. In the commodity talks that I listened to yesterday they said, “Well, you’re going to have to be patient for another year. The breakout probably won’t happen until 2016 because we are still in a slow global economy.”

The American economy is just starting to pick up and we need to see how China deals with its slowdown. And, of course, there’s still a big pile of zinc in the warehouse that needs to be worked out to that critical point where suddenly it goes to $1.20. $1.20 is sort of the magic breakout point for the market.

But this is the time to start putting money into juniors that have existing zinc assets, or ones that there’s zinc mineralization there, and you need to do some more drilling to start establishing the economics of developing it.

So, that’s the metal amongst the whole base metal group that I think has the favorable near-term outlook.

Diamonds, of course, aren’t a metal, but diamonds, I think are ready to come back into vogue. They have a depletion problem somewhat similar to what zinc has. Not a lot of big diamond mines have been found. The really big ones have maybe 10 years, 15 years left, and it takes a long time to develop a diamond project.

So now, there’s sort of a sense that we need to start pouring [money] into diamond projects, advanced diamond projects, to get them ready, because consumer demand for diamonds is going to continue to rise as long as the global economy doesn’t go into some sort of a depression downturn-type of thing.

RIN: Okay. And conversely, any metals that you’re not so optimistic about?

JK: Well, copper right now is going through its troubles. It came under attack from Chinese traders who knocked it down to $2.50, and there’s plenty of supply that has been mobilized.

However, the majors are shelving projects. They’re doing the usual response to prices going down, and they’re postponing future the supply that would otherwise come on stream. So, conventionally, all the experts are saying that, 2017-2018 is when we will have a supply deficit again in the copper market, but copper may end up rising sooner than that. This is the tricky thing about these markets. How much in advance do they anticipate a trend that’s coming?

And copper is a sexier metal than zinc. Zinc is like it’s seen in the industry as a dog in the industry. There’s kind of a just-in-time mentality with regards to zinc, whereas if they start seeing the global economy get traction, and the warehouse levels fall even further and then it and it becomes clear that there aren’t secret warehouses in Shanghai or anywhere where there’s a huge surplus of copper stored, copper could start to move sooner than later.

RIN: Okay. And finally, any junior mining companies you see doing well despite the current market?

JK: Well, I mentioned Peregrine Diamonds (TSX:PGD) several times at conferences, and here’s a company where they are now doing a major bulk sample which will definitively demonstrate the value of the diamonds and its CH6 and also in two other pipes. This company has been hit so hard by this downturn. It has a $60-million valuation for stuff that would have commanded a $1 billion valuation 10 to 15 years ago when the diamond boom was happening.

So, here’s kind of a bear market opportunity of a company at the threshold of a $0.21 warrant expiring on April 6. If the Friedland’s exercise there as they get some more money if they find a minority partner to put up a big chunk of the feasibility demonstration money, let’s say, some jewelry company out of China, then, of course, they don’t have to worry about the dilution treadmill that they’re sort of stuck in right now.

RIN: Okay. Any disclosures you’d like to mention regarding the companies we’ve talked about today?

JK: Scandium International and the Peregrine Diamonds I am an owner of.

RIN: Perfect. Thank you for joining me, John.