2017 was another difficult year for uranium, but what’s the uranium outlook for 2018? Experts weigh in on supply cuts, rising demand and more.

2017 was a rough year for uranium prices, but analysts and company execs are optimistic that prices will increase in 2018.
The U3O8 spot price was at $22 per pound as of November 27, says UxC. That’s up from $19.25 on June 14, but down from $26.68 on February 1.
However, the combination of higher demand and a decrease in the supply glut is expected to “send uranium prices 50 percent to 100 percent higher within three years,” as per Katusa Research. In fact, FocusEconomics says in a report published in early December that its panelists predict that prices will average $26.10 in Q4 2018 and $33.50 in Q4 2019.
Read on to learn more about what market watchers think will happen to uranium in 2018. You can also click here to read about key uranium trends in 2017.

In 2017, persistently low U3O8 prices prompted a number of high-profile supply cuts. At the beginning of the year, Kazatomprom said it would reduce its uranium output for the year by 2,000 tonnes. While the move was initially hailed as a “game changer,” the price boost it caused did not last long.
However, further cuts toward the end of the year have spurred hopes that surplus U3O8 will begin to come off the market in 2018. First, major uranium producer Cameco (TSX:CCO,NYSE:CCJ) announced plans to suspend production at its McArthur River mine and Key Lake milling operations by the end of January 2018; then Kazatomprom said it would reduce its output by 20 percent over the next three years
Mike Alkin of the Stock Catalyst Report explained that companies can’t mine uranium at a cost of $50 per pound and sell it for $20 to $25 per pound because “that’s absolutely uneconomical for them and makes no sense. They had to cut production.”

Demand for uranium is expected to rise as excess supply starts to come off the market. Alkin said that utilities companies that require uranium will soon be entering a major contracting cycle as 30 to 35 percent of their needs in 2020 are not under contract.
He noted that utilities have been holding off on signing contracts in hopes of locking in long-term contracts at low prices; they have been able to meet their needs to some degree via the spot market.
Commenting further, Alkin said, “between the most recent establishment of Kaztomprom’s Swiss marketing arm, which can hold uranium out of the spot market, and these announced cuts, the largest provider of uranium is acting like a disciplined supplier and can influence the price of uranium. Add the Cameco cut to the mix, and suddenly the utilities are going to be contracting into a market that can be at a deficit, not a surplus. Prices are going up. That’s great news for uranium investors.”
Nick Hodge, founder and president of the Outsider Club, also highlighted Kazatomprom’s planned 2018 activities in October, commenting, “Kazakhstan is talking about taking Kazatomprom public, and of course they would want the commodity price higher — a higher uranium commodity price environment for that initial public offering.” Sources have told Reuters that Kazatomprom has hired JPMorgan (NYSE:JPM) as a lead advisor for a London listing planned for 2018.
On a different note, Brian Leni, founder of the Junior Stock Review, noted that Japan’s nuclear fleet represents about 10 percent of total uranium demand, and said that a Japanese reactor restart could be “the catalyst we need to jumpstart the market.” He added that 20 of the 60 reactors currently under construction are being built are located in China, which also represents “a strong future demand source.”
That said, Leni cautioned that the uranium sector is “highly political,” and could also be affected “if tensions were to increase around the world.” He said that while he is expecting prices gains to be “moderate” in 2018, he “would look for a big spike if political tensions around the world were to erupt.” 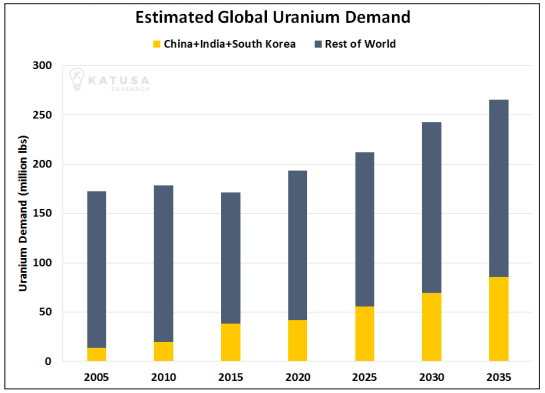 Dev Randhawa, CEO of Fission Uranium (TSX:FCU) and Fission 3.0 (TSXV:FUU), calls uranium “the ultimate contrarian play” for investors and expects to see a “strong upturn for uranium at some point in 2018 driven by further supply disruption.”
He noted that UxC estimates that 2017 uncovered demand is 4.1 million pounds of U3O8, with that amount expected to reach 54.9 million pounds of U3O8 uncovered for 2020. “That represents 29 percent of projected demand for that year and annual uncovered demand rises even more rapidly after to over 179 million pounds U3O8 by 2030.”
Looking to the year ahead, Randhawa said Fission is planning to release an updated resource estimate and a prefeasibility study for its PLS project located in Saskatchewan’s Athabasca Basin.
Ted O’Connor, CEO and director at Plateau Uranium (TSXV:PLU), said he expects a “steady but solid increase in uranium pricing as the timing for the inevitable future forecasted supply demand deficit has been accelerated due to supply disruption.”
He noted that by 2035, the world will need on the order of 75 million pounds of additional uranium supply every year, and Plateau Uranium is “one of the few global projects capable of bringing any new production into the supply stack at less than $65 per pound.”
O’Connor said Plateau continues to drill the Falchani discovery, which has near-surface uranium mineralization overlying thick lithium mineralization with grades five to six times what was intersected previously. “We are awaiting chemical analyses from recently completed holes, and will be moving to a second drill platform for additional drilling to expand the footprint of this new discovery,” he said. The company is also conducting bulk uranium-lithium leach trials on the new mineralized material.
Jim Paterson, chairman and CEO at Kivalliq Energy (TSXV:KIV), said, “if Cameco abides by their announcement, which I believe they will as they are an incredibly disciplined company, that would be very helpful as it will point buyers towards contracting and using up inventory levels. As the contracts start coming in, I believe there will be added excitement in the market and all companies in the uranium sector will benefit greatly.”
Kivalliq Energy’s flagship asset is its Angilak uranium project in Nunavut; it also holds the Baffin gold project in Nunavut and two uranium properties in Saskatchewan.

For his part, Leni said that two companies to watch are NexGen Energy (TSX:NXE) and Uranium Participation (TSX:U), both of which are companies he has invested in.
In October, Thom Calandra of the Calandra Report said he “made a lot of money about a year and a half ago with CanAlaska Uranium (TSXV:CVV), and [recently] started buying it again because it’s at an all-time low.” He added, “Peter Dasler and Karl Schimann and their team of geologists have done a good job identifying properties, [and] vending part of them to the Camecos of the world and diversifying their risk.”
As uranium supply decreases and demand rises, many more market watchers are sure to step forward with stock picks. 2018 looks like it could be a turning point for uranium, and those interested in the space will likely be on the alert as the year progresses.
Don’t forget to follow us @INN_Resource for real-time news updates!
Securities Disclosure: I, Melissa Shaw, hold no direct investment interest in any company mentioned in this article.
Editorial Disclosure: The Investing News Network does not guarantee the accuracy or thoroughness of the information reported in the interviews it conducts. The opinions expressed in these interviews do not reflect the opinions of the Investing News Network and do not constitute investment advice. All readers are encouraged to perform their own due diligence.
Fission 3.0, Kivalliq Energy and Plateau Uranium are clients of the Investing News Network. This article is not paid-for content.